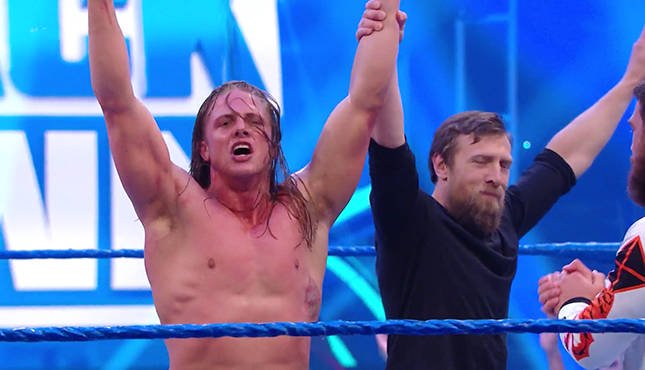 If nothing else, 2020 will be remembered for the moments that rocked us all, right. Whether it be the COVID-19 pandemic, the George Floyd protests, the civil unrest, the lack of social interaction, the constant in-fighting and more, there have been things that have definitely rocked our collective World. Now, late this week, we get another bombshell in the wrestling world as a new wave of exually assault allegations have hit the squared circle. The biggest current day name is Matt Riddle, who made his SmackDown debut Friday night. How long he stays is anyone’s guess as there are now allegations from fellow wrestler Candy Cartwright, someone Riddle was allegedly involved with, that he forced her to have sex with him. Jim Cornette and Jack Gallagher, who has already been let go by the WWE, have both been accused as well. Now, I’m not here to take sides since only those involved truly know the truth. But, count me thoroughly surprised that the WWE continued to hype Riddle and show his win over newly crowned Intercontinental Champion AJ Styles air Friday night on broadcast TV on FOX. There’s certainly room for a lot of backlash there to come, no pun intended. The WWE is not alone in these allegations as superstars from AEW, Impact Wrestling, NXT UK, Progress and more have been implicated. This story is just beginning and will have many twists and turns before all is said and done.

Our thoughts and prayers go out to those involved. For those brave enough to share their stories, we are there for them.

For their part in the matter, the WWE issued this statement on Friday afternoon:

“We take any allegation of this nature very seriously and are looking into the matter.”

Star of the Week – Is there really any question? The Viper, Randy Orton gets our top spot this week. Not only does he take out Edge, pinning him and putting him out for the next 4-8 months with a triceps tear, but he builds on it the very night by punting his best friend Christian back on the sidelines after coming out of retirement for an unsanctioned match. Oh, BTW, thanks to the Nature Boy, Ric Flair for the low blow assist too! Still the dirtiest player in the game Natch!

Fully entertained by BACKLASH. Sure, we could’ve done without the double-count out from Asuka and Nia Jax. Sure, the Universal Title Match wasn’t a classic, but it was better than I thought it was going to be. But, let’s be honest, Edge vs. Orton was fabulous! Even without the devastating torn triceps injury to Edge, the match delivered on so many levels as Randy Orton got his revenge on his former rated-R friend. No, it wasn’t the Greatest Wrestling Match EVER, but it never was going to be. But it proved that those at the top of the chain can indeed wrestle and tell an amazing story at the same time.

Drew McIntyre vs. Bobby Lashley was physical as all hell and yes, we get the beginning of the end for Lashley & Lana after she costs him the title victory.

The Women’s Tag Team Triple Threat delivered on all fronts as did Sheamus vs. Jeff Hardy. The in-ring action was fantastic and pushed both storylines forward.

Apollo Crews got the night going on a good note making Andrade and Angel Garza not like each other even more, with help from Kevin Owens.

As for the “Viking Profits” taking on the Ninjas instead of each other? LOVED IT!

The dirtiest player in the game – Having Ric Flair align himself with Randy Orton to put a low blow into Christian’s efforts to defend his friend Edge was fabulous! Granted Orton doesn’t need the help, it was a nice touch and might even add some fun to Flair with Orton and maybe Charlotte Flair down the road.

Asuka wins – I don’t know why the WWE felt the need to give us a win on Monday night instead of Sunday night, but Asuka needed it. Charlotte Flair is right – Nia Jax should be nowhere near the top of the title picture.

Ninjas – Having The Big Show come on the scene to help The Viking Profits deal with Akira Tozawa and the Ninjas was hilarious! Hope they continue it.

Part 1 – Lana & Natalya – Are we about to get a pair of brats paired together with Lana and Natalya now screaming their displeasure to the World, together. Natalya’s just mad at everyone and Lana’s now looking for a new love after Bobby Lashley’s divorce request. This one could be interesting.

Part 2 – R-Truth & Drew – Loved the back & forth between the two champions. McIntyre saved his own bacon, as well as R-Truth’s with a clean win over Lashley & MVP. Hope we get more of these two in the ring and of course, outside it. R-Truth is comic gold my friends!

Are you gonna go my way?

Zelina Vega – Who will Vega choose as Andrade takes on Angel Garza?

Champions abound – Sasha Banks & Bayley come home to NXT to defend the Women’s Tag Team Championship only to meet the new NXT Women’s Champion Io Shirai’s wrath to end the night. Talk about inserting yourself into the upper echelon of the WWE. Now, that could be a fun three-way in the future!

Adam Cole vs. Keith Lee vs. Finn Balor vs. Johnny Gargano – Everyone wants the titles! So, what better way to have it go down than to have Commissioner Steven Regal lay down the gauntlet. Next week, it’s Lee vs. Gargano vs. Balor for the NXT North American Championship with the winner getting a shot against Adam Cole on July 8th in a winner-take-all champion vs. champion match. Glorious!

Keith Lee vs. Adam Cole vs. Karrion Kross – Just what does the North American NXT Champion have in store after breaking Scarlett’s hour glass that she left for the NXT Champion last week? Give me a specialty match with these three please! Kross and Scarlett won’t be taking that lying down.

What the heck was that?

Drake is decimated – Poor Drake Maverick. Yes, more guts than brains and it left Maverick lying prone after a 3-on-1 beatdown by Santos Escobar, Raul Mendoza and Joaquin Wilde. Who will help Drake when he recovers?

Not the brightest bulb in the pack:

Bronson Reed – Sorry Mr. Reed, but Karrion Kross is going to come for you, i.e. kill you next week. Sometimes it’s better not to poke the bear.

The Stone Brand – Need we say anymore? At least Aliyah got a win!

Hated it beyond belief!

Matt Riddle – Seriously! Not only is Matt Riddle the center of an alleged sexual assault controversy, but what the hell is he doing beating the newly crowned Intercontinental Champion in his first match on SmackDown. HATE. HATE. HATE how bad the WWE makes their champions look on TV. It’s a countless line of new title-holders that lose on television right or shortly after winning the title. The Miz & John Morrison, Asuka, Charlotte Flair, Bayley and now Styles. It’s not a good look for the champions. Why make them champions if you are immediately going to make them weak? Now, it has nothing to do with the match itself. The match itself was pretty good, but just misplaced especially with the social atmosphere the way it is right now.

The AJ Celebration – Now, while I hated that Matt Riddle gets a win over AJ Styles, I did love the build-up to it. Styles plays the pompous ass so well and having Daniel Bryan as the man to build up the roster as new foes was perfect. Cesaro’s facial expression made me laugh-out-loud too!

Sensational Sonya – Sonya Deville is one of the hottest things on WWE TV these days! On the mic, in the ring and overall greatness, Deville is as delicious as it gets right now on Friday night. It’s a shame that it took so long for the suits in the back to give her a shot to be herself. It’s also a shame that there’s no live crowd to feed off of because they surely would be eating this up as I am!

What’s up with Bray? – So, are we now Fiend-less? I thought we were done with the Wyatt vs. Strowman feud – we should be after a clean loss at Money in the Bank. I’m not buying the whole “I created you, I must destroy you” argument that was played out the first time they met a few months ago. Why should I care now? Just because of a wardrobe change? Got to give me more than that WWE!

Superstars vs. NXT Up-and-comers – Why is it OK for the SmackDown superstars to be around the ring with no social distancing but the NXT upstarts have to be behind glass the whole show? Makes no sense but I did at least like that they’re listening to us here at TWITW. We’ve been telling them to get the other current day superstars to ringside for weeks!

The New Day – Not only do Kofi Kingston and Big E get into with the Women’s Tag Team Champs, but also get attacked by Cesaro & Shinsuke Nakamura after their win over Lucha House Party.

Bayley & Sasha Banks – Speaking of the Women’s Tag Champs, the BFF’s get ambushed by Nikki Cross leading to a one-on-one match between Cross and Banks. Love the fire and it looks like Sasha & Bayley have replaced Charlotte Flair in appearing on every show in the WWE every week. Maybe they could challenge for Cody Rhodes TNT Championship on AEW too. Now, THAT would be something! Just as an aside, even just cheering at ringside, Alexa Bliss is a true goddess as Corey Graves would say.

Don’t forget to watch the final chapter of The Undertaker: Last Ride this Sunday on the WWE Network. Will the Boneyard Match vs. AJ Styles be UT’s final match? How did it all come about? It should be fascinating.

Coming up this week: