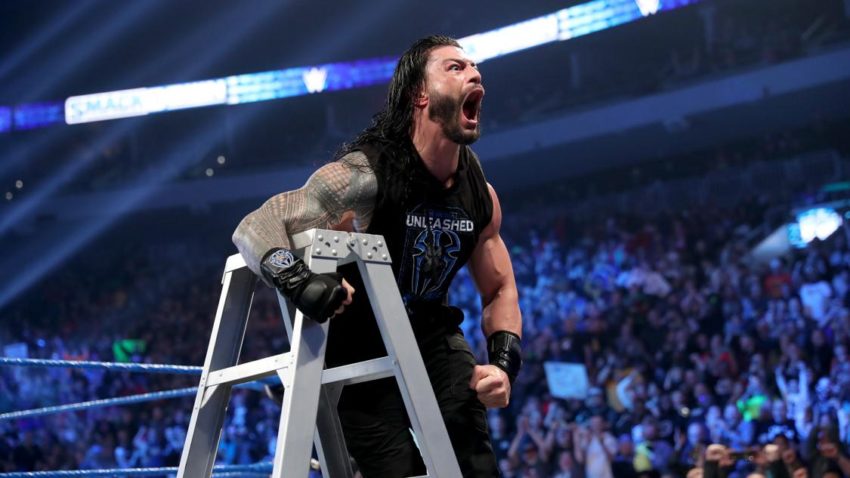 It’s TLC week in the WWE and am I the only one thinking the WWE is just yawning through this year’s end of year PPV. Now, I get that usually, it’s the gimmicks that get this PPV over and that’s one of the things I just don’t get. We have not one, but two TLC matches already scheduled. We get Roman Reigns vs. King Corbin and The Kabuki Warrior vs. Becky Lynch and Charlotte Flair. Plus, add in Rusev vs. Lashley as a tables match minus the ladder and chairs. Shouldn’t there be just one TLC match? With the introduction of the dog food last Friday night by Corbin and Dolph Ziggler, wouldn’t the match vs. Reigns work better as a dog collar match? Makes perfect sense to me!

I need a little more creativity people! How about Rusev vs. Lashley with Lana in a cage. Loser gets Lana and if Rusev wins, he gets Lana for a day to make Lana be his servant/chauffeur/lackey.

Now, what I am intrigued by coming up this Sunday is Bray Wyatt vs. The Miz. Remember, it’s not The Fiend. It’s not a title match. It’s a great spot for The Miz to steal a victory, stand up for his family and to further show there’s a huge difference between Bray and The Fiend. Wyatt may have his shortcomings, but The Fiend would go to the end of the Earth to defeat his opponent. The possibilities are equally endless and delicious! I’m hoping this one main events and sends us home with another cliffhanger! And for that, I give the Star of the week to both Bray Wyatt and The Fiend with a side assist to The Miz. Best storyline of the week, by far!

Here’s your card as of Saturday morning for the TLC PPV:

We feel you Seth – FINALLY! The real Seth Rollins has returned! There’s no doubt that Rollins just feels better as a top-notch heel. In the ring, he’s on an elite level. But on the mic and backstage, his vibe is just more of a fit for his look when he’s a bad guy. So, finally giving in to join the Authors of Pain to take out Kevin Owens makes a ton of sense! Now, let’s see a long, slow burn as these three dominate RAW for awhile. Maybe they take out Brock Lesnar at some point too!

REY REY – Even despite the quick finish at the end, it’s really good to see Rey Mysterio, Jr. get some run in a main event on Monday nights! Beating AJ Styles, albeit with a wink and a nod from Randy Orton, lends a little credibility to his US Championship Title.

Black vs. Tozawa – This one was a pure treat that probably gets lost in the sports entertainment of a three-hour show. Non-stop action from start to finish that clearly was PPV quality or something you’d expect on Wednesday nights.

A rift with Andrade – Is there a rift brewing between Andrade and Zelina Vega? I for one, hope not! They are such an awesome duo together that I hope the WWE is not  thinking of splitting them up with hopes of pairing Andrade with his real life girlfriend Charlotte Flair in a feud vs. Vega and ???. Sometimes, you don’t need to mess with chemistry. Call me old school I guess.

TLC gimmick matches – Call me crazy, but as we’ve stated previously, we need some outside of the box thinking here!

Matt Hardy squash – I truly hope there’s a payoff to all these Hardy squash matches on RAW. Maybe a new persona or bringing back the BROKEN Matt for another run. It’s hard to see Matt Hardy signing a new deal just to put others over and lose in 3 minutes week after week.

Have a night Angel Garza! – It’s one thing to win the NXT Cruiserweight Title in an absolutely stunning opening of a match Wednesday night! It’s completely another to follow that up with an engagement as Garza brought his girlfriend into the ring after the match to propose to her! Talk about instant connection to the fans. Count me in on wanting more from Garza and yes, Garza-Rush III.

Finn’s Finish – A top rope coup de grace over Tommaso Ciampa in a closing attempt on to the already pinned Keith Lee! WOW! Simply scintillating! Balor is now one step away from making his past not only his present but also his future. Wednesday night we get Balor vs. Adam Cole for the NXT Championship that has classic written all over it. My only regret is that they’re not making it a one-hour time limit! But, we can dream! Plus, on a side note, the trio of Mauro Ranallo, Beth Phoenix and Nigel McGuinness were amazing with their points and commentary. Totally invested!

The middle of the show – Sure, it’s great to pack the show with more matches. More matches means more time for those superstars that don’t normally get time and exposure to a national audience. Good to see Raul Mendoza, Cameron Grimes, The Singh Brothers vs. Breezango, a new face in Kayden Carter and more. But, when it comes in the form of 3-5 minute matches, do we really have enough to grab on? Seven matches on a show that normally maxes out at four-to-five matches seems like it’s trying a bit hard to pack things in, much like a RAW or Smackdown. It’s one of the things that makes NXT. Not everyone gets seen each week and the show breathes. So, while we didn’t hate it, we also didn’t love it.

Bray Wyatt vs. The Miz – With Renee Young being sent to The Miz’s Los Angeles home during Smackdown you just knew there would be a payoff. Still, doing it makes it big and real. Love when the WWE makes it personal and with the fact that we’ve all seen inside the Miz’s house with his family from the Miz and Mrs. Show on USA Network, it all feels like we are part of the story. There are so many layers to unravel still with this one that I hope that the WWE doesn’t feel compelled to fast track this feud. Let it play out through Royal Rumble and maybe even through until WrestleMania if possible.

That ham – Wasn’t that one sweet Milwaukee, Wisconsin ham that Otis was trying to give to Sami Zayn? I’d sure take it as a Secret Santa gift! The crowd loves them some Heavy Machinery!

Kofi’s explanation – Heading into the set-up of Kofi Kingston vs. King Corbin, we got a nice exchange between the two where Kofi, two months later, explains how he felt about his WWE Title loss to Brock Lesnar and the 2019 year in general. Good insight and a payoff that needed a receipt.

Double no-contest – Of course, we all knew that Roman Reigns was behing the backstage attacks all night long on King Corbin’s security team as payback for the dog food incident last week, but did we really need a double no-contest in the main event? Having The Revival help out Corbin and Ziggler take out the New Day lays a bit of credence to the Smackdown tag team title match, which really has no business being a ladder match, I’ll grant you that. But overall, it kind of felt like they just gave away the last half hour of the show just to have Reigns stand tall at the end of the night as poor Dolph eats another table off the ladder.

Where was Lacey Evans – Doesn’t she have a title match Sunday at TLC?

What’s with Elias and Dana Brooke? First with the shots at Drake Maverick last week and now the crude callout of Bayley this week. A threesome with Bayley and Sasha Banks, really Elias? She looks like a dude? You’d expect trying to push the envelope on USA Network, but on FOX? It seems a little misplaced and leaves Elias just meandering as a one-trick pony from week to week. At least this week, it led to an immediate match between Bayley and Dana Brooke with the obvious result. Maybe it’s just me, but I’m expecting a bit more out of Elias than what we’re getting.