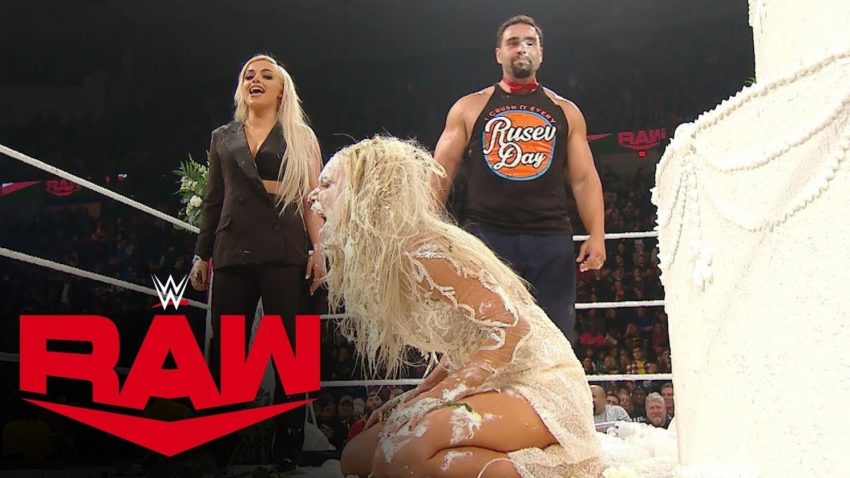 Welcome back to the roaring 20’s my friends! It’s time to have 20/20 vision as we enter the year 2020 for the WWE. And with it, it begins the road to the Royal Rumble and more importantly, the road to WrestleMania in Tampa this April!

Star of the week – Lana and Liv.

How could it not be, right! Lana absolutely stole the show this Monday night as the overbearing bride-to-be in the near nuptials with Bobby Lashley. We now know of course that Liv Morgan spoiled the party by coming out as Lana’s lover while Ruse crashed and crushed Lashley after hiding out in the oversized wedding cake in the ring. While some on social media panned it, I absolutely found it entertaining as hell! What once was a storyline we all wanted to just go away, now has legs and a new twist with I’m sure a mixed tag-team match to come.

Plus, it looks like we’ll be seeing more of AJ Styles and Randy Orton as Orton faked a knee injury to RKO Styles with a rope-a-dope promo bringing back memories of Mark Henry’s faux retirement to squash John Cena.

How about the newcomers? John Morrison, Sheamus and The Usos all found their way back to the WWE Friday night on the first Smackdown of the year. The most intriguing of the trio to me is Morrison as it appears The Miz is headed down the heel turn road. While the crowd may love the babyface Miz, a more serious, in it for me Miz is him at his best. The question will be can the WWE Universe hate him in the ring while loving him on Miz & Mrs.? A dilemma indeed!

Viva La Lana & Liv – Absolutely loved the wedding! Sure, it probably went a tad too long and messed up some folks DVR tapings, but as far as entertaining, it was an absolute grand slam!  From it all being about Lana to Rusev in the cake to Liv Morgan coming out as Lana’s lover, it hit all the buttons. And kudos to the Reverend, actor Scott Malone who said it was the craziest 20 minutes of his acting career. Welcome to a WWE wedding Mr. Malone. Now to those ECW fans out there, this one was surely a Paul Heyman storyline with shades of Beulah McGillicutty and Kimona in the ECW Arena.

Black vs. Murphy – These two delivered once again. The only thing I ask is that somewhere down the road, they give these two an hour to do an IronMan Match! Physical and exciting as hell!

The Street Profits get some street cred – A much needed win against top competition for the The Street Profits. With the victory, they thrust themselves into the tag team title picture, facing The O.C. and The Viking Raiders in a triple-threat match this Monday night on RAW.

TV 101 – Ok, to those who don’t know, I’ve produced a bit of tv in my day, so when things don’t make sense it drives me crazy! So, when you announce that Andrade will take on Rey Mysterio, Jr. in a rematch for the US Title next week before you show the footage of Andrade winning the title, it makes no sense. It’s the look things that make continuity folks! Make it seamless.

A taped show for the first episode of NXT of the new decade. While it’s nice to showcase some of the best matches not shown on broadcast TV, I didn’t quite get the awards portion of the show. Why did we get Steven Regal handing out awards in an empty arena in the middle of the ring? It all seemed flat and with no purpose to showcase the best of NXT, especially after the momentum they built all year long. It just seemed like a throwaway. The ratings definitely proved it as a live edition of All Elite Wrestling nearly doubled NXT in ratings.

One good thing, we get the brackets for the 2020 Dusty Rhodes Tag Team Classic:

Welcome back – 2020 kicks off with a trio of returns. First, John Morrison is back to help out his old friend The Miz after his loss to Kofi Kingston. Then, Sheamus gets a huge pop to chase off The Revival only to lay out Shorty Gable. Finally, The Usos end the night to save their cousin Roman Reigns from another dog food beatdown from Dolph Ziggler and King Corbin. Good things ahead should be coming from all three (or four).

Mike The Miz-erable – It looks like we have a heel turn coming ladies and gentleman. Of course, we get The Miz is still bitter about The Fiend and missing out on a shot to get back at him at Royal Rumble now that Daniel Bryan beat him last week. But now, we get that frustration being taken out on The New Day and John Morrison is suddenly back to help his former tag team partner. Intriguing indeed could be The New Day vs. The Miz and Morrison. A slo-mo entrance is sure to follow!

The obligatory Otis – We have got to see Mama Otis, don’t we! I hope it doesn’t disappoint when Mamma meets Mandy Rose! Just a bit each week does us good!

What we didn’t get:

Where was The Miz – If The Miz is so hell bent on getting back at The Fiend, where was he during the main event when The Fiend attacked Daniel Bryan? Shouldn’t he have been racing out there to save the man he started the show wishing good luck to against The Fiend? It’s all in the details my friends.

The start – Why can’t we just start a WWE show with a match? The ladies tag team match was a very good one with the triple threat, but we had to endure the first segment of talk and a commercial break before getting to it. Sometimes less is more and the crowd, both at the arena and at home watching on tv, would get more into the show with action to start. Agree? Disagree? Let us know!

Brock Lesnar – what will the Beast bring in 2020? We find out Monday night on RAW. Will we get an off-beat challenger for Royal Rumble – can you say Erick Rowan? Or does Seth Rollins and the Authors of Pain make him the next victim? Eiher way, you’ve got a bunch of unpredictability to Lesnar and the future of the Universal Champion.

Congratulations to Charlotte Flair and Andrade on their engagement! How soon will it be until we get the next great power couple in the WWE on TV?