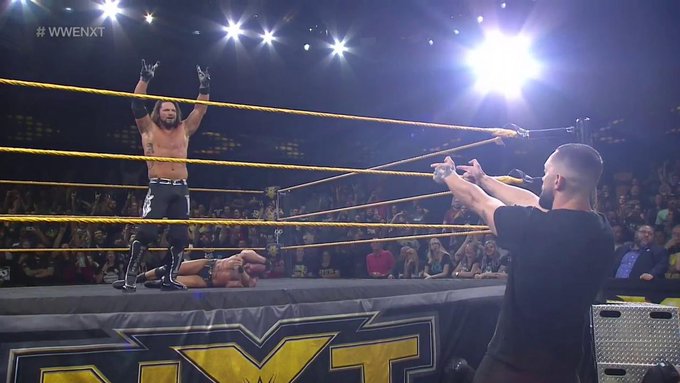 As King Corbin aptly said on Friday Night Smackdown, NXT is all anyone can talk about! It’s true, it’s damn true to quote the man that Corbin retired, Kurt Angle.

Who’s going to attack who. Who’s going to show up where. Who’s going to face each other at Survivor Series. There are plenty of storylines to answer those questions. And the interest is growing! Just look at NXT’s ratings for Wednesday night as they pulled almost even (822,000 to 813,000 according to Nielsen) in viewers for the Wednesday Night War with AEW. My question is will it only be NXT taking shots at RAW and Smackdown or will over the next two weeks, will we also get RAW taking shots at Smackdown as well in traditional blue vs. red rivalry.

This week, we get a nod to the Bullet Club with an AJ Styles – Finn Balor stare down at Full Sail University. We also get more into what could be the end to Seth Rollins’ babyface days. Days that have seen Seth fighting for, yet failing it seems to capture any and all the major titles in the WWE. At what point will Rollins just lose it? I’m looking forward to it.

What we’re also looking forward to is War Games! Are we headed towards a War Games between the brands? We already know we have two NXT War Games to look forward to and after all of this week’s excitement and tryouts, 14 of the 16 contestants have been announced. On the women’s side, we’ve got Rhea Ripley, Tegan Nox, Mia Yim, Candice LeRae vs. NXT Women’s Champion Shayna Baszler, Io Shirai, Bianca Belair and TBD. For the men, it’s the Undisputed ERA vs. Tommaso Ciampa, Matt Riddle, Keith Lee and TBD.

Finally, we have a pair of matches set for the upcoming Survivor Series with the RAW vs. Smackdown vs. NXT having a championship theme.

Plus, the WWE Championship is on the line with champion Brock Lesnar facing Rey Mysterio, Jr.

What’s next for The Fiend and the Universal Championship? We may get a clue from across the pond!

Color me a traditionalist, but I’d love to see Survivor Series come back to Thanksgiving Day Night, but I know that will never happen.

Becky vs. Baszler – If you missed it, go back and watch it! In what could be one of the best pieces of business this week, the RAW Women’s Champ goes face-to-face with the NXT Women’s Champ in a verbal spat not to be missed.

Natalya & Charlotte – As we’ve said in the past, the pairing of these two veterans is a great thing for the Women’s Division. Putting them over in a non-title match over the tag champions means that soon we’ll get a tag team title match between them and The Kabuki Warriors. My question is will we see Paige come back to exact revenge on her former tag team.

Adam Cole – What’s not to like about the NXT Champion? Who else could main event back-to-back shows that aren’t his brand? First, taking out Daniel Bryan on Smackdown and then going toe-to-toe with Seth Rollins on RAW. Well done, BAY BAY!

Rey Mysterio, Jr. – Viva la little man! Mysterio strikes back with his trusty partner, a lead pipe, to exact revenge on WWE Champion Brock Lesnar. And to boot, he should get a title match at Survivor Series.

Dio Maddin – Sticking up for the King, Jerry Lawler is never a bad thing! Unfortunately, Maddin paid the price courtesy of the WWE Champion.

Another loss for Humberto Carrillo – At some point, Carrillo has to win a match on TV, right? It’s great to face Seth Rollins, AJ Styles and now the OC. But if you lose every match, what does it get you? You have to start building him up with some victories or else it becomes a losing streak like Curt Hawkins.

Another loss for Sin Cara & Carolina – See above. For a feud to be successful, it can’t be one-sided. Yet, this one is.

Welcome to Full Sail, The OC – Way to start the show! AJ Styles, Luke Gallows and Karl Anderson delivering a beatdown to the NXT roster reminiscent of The Outsiders using Rey Mysterio, Jr. as a pinata into a production truck. Then, to lay down the challenge to NXT after a week of NXT taking charge of RAW and Smackdown was needed and well played. And remember, The OC completely got to skip going to NXT before joining the main roster.

Tommaso Ciampa – To the OC: “Welcome to the main roster.” Well done Goldie!

The NXT response – Keith Lee and Matt Riddle are easily making themselves into main event talent every week on NXT. Throw in former champ Tommaso Ciampa and you’ve got a dramatic six-man main event against The OC that ends in a wild melee to a returning Finn Balor.

Welcome to Survivor Series Finn Balor – After a week of wondering where Finn Balor stands on the whole NXT vs. RAW vs. Smackdown rivalry, we now have a slight glimpse into that picture. Balor seemingly came out to help his NXT mates in the main event only to deliver a knockout pele kick to Ciampa, a kick that AJ Styles acknowledges with a “two-sweet” gesture, a nod to their Bullet Club days in Japan. And yes, I love that Mauro Ranollo referenced that on the broadcast, something not usually done since it was pre-WWE days. Could Balor be strattling both sides of the battle?

War Games Build – A heavy concentration on who Shayna Baszler & Rhea Ripley would pick for their team in War Games, including a match between Baszler herself and Dakota Kai – a quality non-title match that made Kai look good and established her into the War Game mix. That match leads to a full out brawl with Ripley’s team and a Mia Yim’s kendo stick save of Team Ripley. With Yim getting the final spot instead of Kai, could we see a turn in Kai’s future after being shunned? Also, how come Baszler doesn’t have her sidekicks, Jessamyn Duke and Marina Shafir on her team? Right now, we’ve got Rhea Ripley, Tegan Nox, Mia Yim, Candice LeRae vs. NXT Women’s Champion Shayna Baszler, Io Shirai, Bianca Belair and TBD.

Angel Garza – A win over Tony Nese nets him an NXT Cruiserweight Championship match next week against Lio Rush. Way to get some heel heat too after the match by slapping Rush instead of shaking his hand. It gives us more than just a match thrown together. Emotion and storyline added to athleticism is always a productive method!

Santana Garrett vs. Taynara – A bit clunky at times, I expected a bit more considering what else we’ve gotten from what is red-hot, stacked women’s division in NXT week after week. Call it an average, albeit short – just four minutes – match and possibly just an off-night.

No update on Johnny Gargano – He is the emotional soul of NXT. Don’t let a week go by without updating his situation after being put out by Finn Balor. Maybe, we’ll just see him as the fourth member of War Games and they’re just waiting for that surprise in a week or two.

It’s a New Day, New Champs – Kofi Kingston is a champ again as Kofi and Big E reign supreme as Smackdown champions once more. Of course, this will only fuel the IWC rumors that The Revival are headed out in 2020 to AEW or elsewhere.

King Corbin’s heat – Easily the top heel heat on Smackdown. Corbin draws it and the crowd loves to dish it. Having Dolph Ziggler and Bobby Roode help him out could point towards a Survivor Series team grouping in a few weeks.

Walter and The Imperium – As you know, we’re big fans of WALTER from NXT UK and NXT. It makes sense to unleash them at a Smackdown in Manchester, England to further the NXT vs. Smackdown vs. RAW feud. Getting them some TV time with new tag team champs, The New Day and Heavy Machinery makes a lot of sense for the NXT UK Champion WALTER,  Fabian Archer, Marcel Barthel and Alexander Wolfe

Will he stay or will he join – Sami Zayn’s continued pursuit of Daniel Bryan has some legs and some intrigue to it, especially with all of the chaos and uncertainty headed towards Survivor Series. Plus, add in The Fiend attacking Bryan backstage and we could find out our next feud for the new Universal Champion. A Global Faction of Cesar, Nakamura and Bryan led by Zayn mixing with the Firefly Fun House could very well be worth watching.

Different week, same result – NXT Women’s Champion Shayna Baszler attacks Smackdown Women’s Champion Bayley. After a confrontation on RAW with Becky Lynch, Baszler is becoming must-see TV on every show to see who she’s going to take out next.

Fire and Desire Fail – Since when did Mandy Rose and Sonya Deville become jobbers? It seems like they lose every week in some form or fashion. Yes, I realize that’s an exaggeration, but I think they are better than what they are being portrayed. Maybe Sonya Deville would work well as a member of Shayna Baszler’s War Games team? Hmmm…..

Fury and Strowman – So, now we’re supposed to just accept them as a team? We know that Tyson Fury isn’t going to be around much due to his boxing commitments. But after hating each other for a month-plus, they just team up to beat up The B Team of Curtis Axel and Bo Dallas. We’ll chalk it up to a taping in Manchester, England for a fan pop and see where it goes from here.

Since RAW was taped Friday in Manchester, England after the Smackdown taping, we know there are some things set to unveil Monday night on Veteran’s Day. All we can say, as to not spoil things, is that it could be a K-O of a night.

Thanks for letting us share our thoughts! Shoot me an email at jcrowe567@gmail.com. We’d love to hear you comments and suggestions! You can also check out my blog, The Crowe’s Nest as we delve into more pro wrestling, sports entertainment and the World of Sports. My apologies ahead of time – I AM a Patriots and Red Sox fan! If you’re not down with that, I’ve got TWO WORDS for you… NEW ENGLAND!