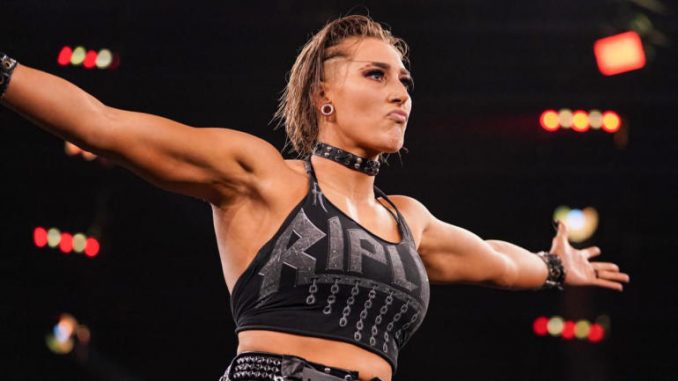 It’s time to turn the page for the WWE.

After a very successful Survivor Series weekend for NXT, between NXT: WarGames and NXT’s win at SS, it’s time for both RAW and Smackdown to pick up the pieces. And with that, we get some brand new storylines, new faces and some old faces returning. All which should make for an interesting final PPV of the year & decade with TLC coming up in December.

A heel-ish Seth Rollins should be good for business on RAW, especially if he brings the Authors of Pain into his fold to start a new faction. Sheamus returning to Smackdown, along with more of Daniel Bryan vs. The Fiend, is intriguing. Will he partner up again with Cesaro or go it alone? Meanwhile on NXT, Finn Balor seemingly made his choice NOT to follow Adam Cole and The Undisputed Era. What comes next should define the next few months at Full Sail.

Star of the Week – Rhea Ripley

Hands down, she owned the week leading up to Survivor Series and cemented this week’s award by playing the underdog and leading herself and Candice LeRae to a 2 vs. 4 win over Shayna Baszler’s team at WarGames. Then, just for fun, Ripley survived the Survivor Series in an NXT win over RAW and Smackdown in the women’s elimination match, taking out Sasha Banks for the victory. Size, smarts and the “look” will certainly elevate Ripley who looks the part on any stage she’s been put in these days. Well done!

The town hall meeting – What better way to make Seth Rollins the bad guy than to have the entire (well, not the ENTIRE – we’ll get to that below in what we hated), RAW roster walk out on him as he takes them to task for losing Survivor Series. Lest we forget Seth, Keith Lee took you out. Remember what they say about people who throw stones, right Kevin Owens!

AOP – Closing the show with a cliffhanger as to whether the Authors of Pain will join Seth Rollins was a good choice. The AOP took out Kevin Owens but did nothing to Rollins leaving us to believe there’s a deal there to be made. Yet, will they follow through or be their own men without Seth? Stay tuned!

Asuka vs. Charlotte – Always a classic of top notch, elite athleticism. Plus, how could we NOT love Charlotte getting the green mist? The expression alone is worth the price of admission.

Viva La Raza – Rey Mysterio Jr. is a WWE Champion again. This time, defeating AJ Styles for the United States Championship. Surprising. Deserved. And who knows, maybe a springboard to the final chapter and bringing son Dominik along into the spotlight after the Brock Lesnar beatdown?

The town hall WITHOUT Becky Lynch – Where was Seth Rollins’ girlfriend to point the finger at? Becky lost too at SS. Shouldn’t she have been there too? She certainly wouldn’t have taken the venom Seth was spewing without interjecting The Man’s point of view, right? Or would she? Maybe she knew what Seth was going to do and wanted no part? I hope there’s a story there with that one. Something to keep your eye on, I think.

Matt Hardy’s return – While we loved seeing Matt Hardy return to Monday Night RAW, there could’ve been more done to further his character. Is another deletion on the horizon? Having him lose to Buddy Murphy is fine, but having him lose with nothing to it makes for a lost opportunity.

Holy Keith Lee – Mr. Lee continues to impress week in and week out. And now, talk about your moves to talk about. Lee sent Adam Cole flying right out of Full Sail, into the crowd and Bobby Fish right out of the tag team match with one humungous body block.

Balor vs. Ciampa – I was a little disappointed we got this one so soon without buildup and anticipation, but the match itself delivered. Give these guys a good 30-40 minutes though and they’ll really impress.

A live music video, anyone? – The open with a live performance by Josiah Williams, cut to highlights from WarGames and Survivor Series while the whole NXT roster celebrated was well done. Nice reaction from the crowd, who later disappointed, made it special as well. A moment indeed!

Full Sail – I’ve said once and I’ll say it again. NXT has outgrown Full Sail as a week in, week out venue. Sometimes, in such a small venue, the dramatic twists and turns lose some of the crowd appeal. I thought there was a bit of a disappointing reaction, short and sweet and understated, to Balor’s kick to Cole in the main event. If NXT’s going to be the hot brand that is on par with RAW and Smackdown, it has to be put in front or larger crowds on a more regular basis. They deserve as m

The Fiend vs. Daniel Bryan, part 2? – Multiple Firefly Fun House episodes on one Smackdown is a treat, a Thanksgiving Day after treat. Great stuff, right Huskus! Love the homage to all of Wyatt’s characters. Well done. Let him in Daniel! The YES movement is back and possibly with a new look after The Fiend was left with a handful of hair from Bryan’s own body!

Welcome back Sheamus – I guess The Fiend isn’t the only Smackdown superstar to get the red-light treatment! “Smackdown will be mine” says Sheamus. But who will he go after? Sounds like everyone. Let’s hope he delivers. Sorry Elias, Sheamus was cooler!

Welcome back Alexa – Awesome to see Miss Bliss return to the ring to save her bestie, Nikki Cross against Sonya Deville and Mandy Rose. Here’s hoping Alexa stays healthy for a bit.

Reigns vs. Corbin continues – Not really feeling it. While Dolph Ziggler and Robert Roode against Roman Reigns has some fun qualities to it, Baron Corbin’s feud with the Big Dog is lacking a certain something. Maybe some physicality will be added at TLC to light a spark or maybe to end the rivalry once and for all.

Lacey Evans back and forth continues – Heel. Face. Heel. Face. Can the WWE please decide what they want us to do with Lacey Evans. Love her. Hate her. I just don’t get it. Now, after all those failed attempts against Becky Lynch on RAW, Evans somehow now gets a chance at Bayley and the Smackdown Women’s Title. Sure, she got a 10-second chant from the crowd, but they’re fickle.

The New Day – Whether it be an Open Challenge or just Big E and Kofi Kingston on the mic, they always deliver an entertaining segment or two each week.

Stay strong Mauro Ranallo! We hope we see you soon back where you belong, calling NXT!