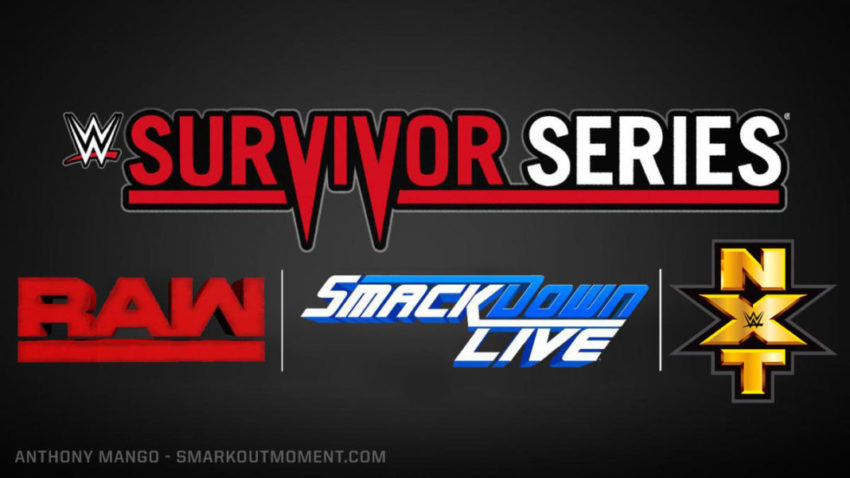 The road to Survivor Series goes through NXT!

When you think about Survivor Series 2019, it’s the overriding theme that you’ll walk away. The youth. The exuberance. The excitement. The edge. The passion. No BS.

Imagine what this year’s Survivor Series would look like without the NXT portion of brand vs. brand vs. brand – WWE style. Sure, we’d get some surprise matchups but would we get epic, what seemed like once in a lifetime matchups like we have this Sunday in Chicago?

So, when we think about what this week in the WWE was all about it. It’s the wherewithal that the WWE has always been able to turn to when it’s backs are against the wall, facing a new rival that they feel is a bit threatening (yes, we see you AEW!). Because without All Elite Wrestling, do you really feel like we’d be getting Becky Lynch vs. Bayley vs. Shayna Baszler? Would we be drooling over AJ Styles vs. Shinsuke Nakamura vs. Roderick Strong? Would we be excited about The Viking Raiders vs. The New Day vs. The Undisputed Era?

And now to boot, to NXT’s credit, they’ll be doing it all just one night after staging their very own Survivor Series: Takeover with WarGames on Saturday night. One has to cross their collective fingers that no one gets hurt and doesn’t make it to Survivor Series Sunday. Or maybe, that’s the plan for RAW and Smackdown – strike early and often and take out 1/3 of the equation.

The possibilities are endless! And for the first time in quite some time, there’s a buzz that’s building in the WWE. Will they deliver? Here’s hoping they do, because it they disappoint and fizzle out, it could be a long time before wrestling fans give their faith back to the WWE.

STAR OF THE WEEK – Samoa Joe

Yes, even with everything else going on with brand supremacy on the line and with run-in after run-in after run-in happening all over the place, we go to the commentary desk for our star of the week. Pressed into duty with the, ahem, benching of Dio Maddin, Samoa Joe proved what most have known for a long time. The man talks it as well as he walks it! Smart, witty, edgy and to the point and the perfect mix to The King Jerry Lawler and Vic Joseph on Monday nights. Sure, it was only one night and no, we don’t want to see Joe not wrestling, but it’s a definite plus to use his injury hiatus to everyone’s benefit. He’ll put the right people over and do it in a way that it will make Monday night’s three hours not seem exactly like three hours.

A close second goes to last week’s winner, CM Punk. Talk about your splash! On his first full night on WWE Backstage, Punk did exactly what we thought he would do – speak his mind as he wants, when he wants and make sure you know it’s coming. Either by putting Seth “put the phone down” Rollins in his place or by giving real advice to the WWE about the women’s division being the best thing going (a sure shot to creative and the men on the roster as well), Punk was brutally honest and accurate. Let the superstars breathe and the product will improve.

An even closer third goes to Rhea Ripley. Star qualities, my friends! Looks, athleticism and now getting a chance to shine with the superstars of the women’s divisions!

Now, on to the shows!

The Man and The Queen – Absolutely loved that Becky Lynch and Charlotte Flair not only took on The IIconics, NXT and security, but also threw a few shots at the duo being paired together at every turn lately. Listen up backstage, it’s too lazy to throw your best together because it’s easy. Think out of the box and let them make stars out of the rest of the division.

Kevin Owens vs. Drew McIntyre (part one) – Absolutely fantastic match. Should we expect anything less from these two. An amazing match until…. (see what we hated).

Triple H’s promo – As the “face” of NXT, Triple H has surely put a charge in his charges from Full Sail throughout the build to Survivor Series. First, trying to lure Seth Rollins over to his team and now, this week, putting a bullseye on Kevin Owens in an epic promo that made so much sense, I was rooting for Owens to join Team NXT. Of course, the only thing wrong was…(see what we hated).

Paul Heyman – Since I’m from New England, I’ll tip my cap as a Paul Heyman Guy. Not only does he sell a PPV and a match like Brock Lesnar vs. Rey Mysterio, Jr. like no other, but he also lobs some jabs the way of the hometown Boston crowd. Heel to the end. Love it, Mr. Heyman.

Kevin Owens vs. Drew McIntyre (part two) – Why in the blue hell did we not get a finish? We get that the WWE doesn’t want ANYONE to lose these days. But, having Triple H come out at no particular time to stop a match to talk to Owens makes no sense. It also makes no sense that on TV, we never got an explanation as to what happened to the match and McIntyre. It just disappeared. It takes nothing away from Triple H’s promo, which was fantastic in its own right, but just misplaced.

Night of stars – From Becky Lynch opening the show, to The Revival in a tag team dream match against The Undisputed Era to Shinsuke Nakamura & Cesaro running in to take on Matt Riddle & Ricochet to Seth Rollins closing the show to face-off with Tommaso Ciampa, it was a night of stars in Orlando, Florida. And sure, it worked. For the first time in eight weeks, NXT topped AEW in total viewers on Wednesday night.

Riddle vs. Ricochet – Sure, it was a bit short at under four minutes, but we got a clean finish. It’s something we needed and could lead to more down the road. Plus, we got a Finn Balor cameo to boot.

Ladder match, anyone? – I could’ve easily made Adam Cole the star of the week as he tops off an epic month by claiming the advantage in WarGames for his Undisputed Era team by knocking off Dominik Dijakovic. But, then again, none of us should be surprised as every main event is delivering for NXT on Wednesday night.

Honestly, there’s nothing to dislike this week. Great build as the middle spot to Chicago. So far, the best cross-tri-brand showing of the month.

Send home show success – Now that’s the way you send us into a PPV and make us more interested! Lately, WWE’s go-home shows before a PPV have been ho-hum and not really brought in more hype for the show, but this one did it in spades! Making Rhea Ripley a star on the level with Charlotte Flair and Sasha Banks with a unique cradle move out of Flair’s figure eight hold was amazing! Keeping The Undisputed Era as a force on par with any faction in the WWE is the right way to go. And the all-out brawl that ends the show with Braun Strowman facing off with Keith Lee made me want Sunday night to come immediately. Kudos!

Shinsuke’s new belt – Yup, that new Intercontinental Belt is super sweet. Much improved from the simple white belt. One question, though. Does Sami Zayn really have that much power to hand over new title belts? Interesting!

Bayley vs. Baszler – Love the back and forth beatdowns between these two. Bayley gets the last lick in before Survivor Series. Gotta love the underdog getting an upper hand to make you believe, right?!

Addressing the elephant in the room – Loved that AJ Styles didn’t let all those CM Punk chants go by without a shot. You knew they were coming, whether it be in the Styles segment or as Roman Reigns and Seth Rollins got involved in the end of show melee, and the WWE should encourage interaction now with Punk on WWE programming on WWE Backstage. Styles saying he’d mop the floor with Punk without saying his name keeps that dream alive.

Who’s team NXT – We still don’t know who’s on the men’s side for Team NXT. We would NOT like it to involve Triple H. There’s more than enough stars on NXT to fill a five-man team for Survivor Series. The rumors haven’t died yet, so while yes, there’s intrigue in who the team will be, I’m guessing they might be waiting to see who survives WarGames to see who will be available to part of Team NXT’s men’s elimination match.

The Miz – While we like him in the midst of the The Fiend vs. Daniel Bryan feud to provide some historical angst for Bryan, where does he fit in for Sunday’s Survivor Series? I guess that leaves him in limbo to help out in some form or fashion, but shouldn’t one of the WWE’s biggest stars have a defined role in one of the major four shows of the year?