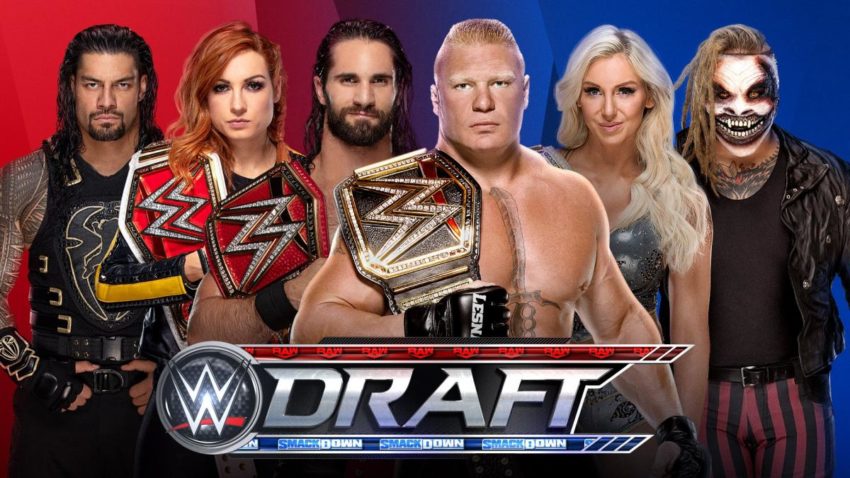 Talk about your busy week in the WWE! Start off with a signature PPV in Hell in a Cell, the final Monday Night RAW before the WWE Draft, night two of the Wednesday Night Wars for NXT and draft night on Friday Night Smackdown. Plus, throw in a Friday afternoon presser from Las Vegas for a huge two-match announcement for The Crown Jewel. There’s a lot to get through, so let’s get to it!

Overall, a solid week around the WWE. But here’s something that I see is getting lost. Emotion and details. Yes, the WWE is built on sports entertainment so sometimes the pure emotional side of pro wrestling gets lost for what the WWE might see as the greater good. For instance, the main event at Hell in a Cell basically gets thrown away with a DQ/stoppage that should’ve never happened between Seth Rollins and The Fiend. And yet, instead of addressing it on RAW, it’s buried and not even mentioned until the final third hour.

Fast forward to the Las Vegas presser. Watching it LIVE, it was a snoozer. Sure, announcing Tyson Fury vs. Braun Strowman and WWE Champion Brock Lesnar vs. Cain Velaszquez for The Crown Jewel in Saudi Arabia is a big deal. Yet, it fell flat with no real fans in the crowd and just the participants, led by Michael Cole and Triple H, talking from a podium. Missed opportunity to be creative there.

It’s probably partially the reason why AEW is beating NXT on Wednesday nights (1.1 million viewers to nearly 800,000 this week on TNT and USA Network respectively). The in-ring matches on NXT are fabulous, probably better than AEW. Yet, we need the emotional tie-in and the storyline to go with it. Why is WALTER facing Kushida in the main event? Awesome match, but for the mainstream fans to grab hold, they need to be told why. And that’s not on Mauro Ranallo and crew. They are fabulous calling the match. It’s a macro-view that needs to be embraced and hopefully will moving forward.

Think out of the box! Use Bayley as the example. Her heel turn has been fabulous. Well told and executed! And judging from Smackdown’s ratings, down to 2.9 million viewers from last week’s 4.2 million viewers in its premiere on FOX. Neither the network nor the WWE can be thrilled with that number considering it was a highly promoted draft episode. But then again, it was the #1 show of the night on broadcast television in the 18-49 demo.

Hell in a Cell PPV

What we loved:
Bravo Becky Lynch and Sasha Banks! That’s the way you kick off a PPV inside a Hell in a Cell. Storytelling, physicality and use of weapons were all well done! Neither women is hurt by this one.

The Kabuki Warriors get over! The rebuilding of Asuka continues as she gets a title to add to her portfolio. There’s enough here to build up a feud right through Survivor Series!

What we hated:
What in the blue hell was up with that ending in the main event! Talk about killing the buzz to everyone involved! You bury the fans with a ref stoppage/DQ ending that left the folks in the arena chanting for refunds and “AEW.” Not something the WWE wants to hear after an awesome week leading into the PPV. You bury Seth Rollins by rendering his finishers useless. You bury The Fiend by not having him win. What was the point of the match if you (the WWE) didn’t want him to win or lose? YIKES!

No Kevin Owens. No Kofi Kingston. No New Day. It just seemed like the WWE put this together as the day went along with only three matches announced before the weekend.

Tyson Fury vs. Braun Strowman – we had to wait three hours for the payoff with some fisticuffs in the ring, but it sure got the attention of everyone, making both guys look strong.

More Kabuki Warriors! The green mist returns on back-to-back nights to do in the Champions. The Champions Showcase raised the level of everyone and included a run-in by Alexa Bliss and Nikki Cross to keep that feud engaged. Well done!

Completely ignoring the Hell in a Cell PPV main event between The Fiend and Seth Rollins. I get it that Wyatt wasn’t cleared medically reportedly, but to not even mention it until the third hour of the show is ridiculous. The absurd ending made it imperative it gets addressed early in the show with some sort of explanation.

I’m all for giving folks a chance to be on TV, but the Singhs, Lucha House Party and Apollo Crews vs. Ricochet on a RAW after a PPV? They made up half of the matches on the card! Gotta be more creative than that although I’ll give Ricochet and Crews props for at least making it a little fun.

Main event delivers! WALTER and the Imperium is mad over. I’m sure eventually down the line, they’ll mix it up with The Undisputed ERA. But not yet. Give it time.

Solid matches with no B.S. – it’s not just the tag line. The matches deliver without the fluff. The question will be is the perception vs. AEW and if people hang around to keep the ratings up.

The build for Tomasso Ciampa. I’m glad they are rushing him back to the ring. Mixing it up with Adam Cole and then a backstage mix-up with Angel Garza to set up a match next Wednesday is the way to do it.

Nothing. No intense dislike for this week. A very solid show. Now, could we have done without the naked belt picture of Roderick Strong? Sure, but it was mildly funny. Plus, that’s the entertaining part of the Velveteen Dream, who gets to take on Strong again for the North American Title in two weeks.

While it was a very good match, Lio Rush gets redemption as NXT Cruiserweight Champion. Now, his run with Bobby Lashley on RAW was annoying, it’s nice to see him get a second chance. But for me, he doesn’t much move the needle yet. Here’s hoping that changes with this latest opportunity.

Looking ahead and looking forward to Damian Priest vs. Pete Dunne!

What we loved:
More Shorty Gable! Sure, three times King Corbin vs. Gable might be too much, but the Shorty sparkplug is entertaining as hell! Give me more!

Kofi Kingston gets the pin over AJ Styles. After a 10 second Title loss on the debut of Friday Night Smackdown on FOX last week, Kofi gets a little juice back with the clean win.

Bayley’s new look and a title win! DID NOT SEE THAT COMING! Heel rule #4. You have to get a new outfit and new look. The former hugger did that in spades along with chopping down her inflatable fanbase. Add in a regained championship and the night Is complete! Outstanding move! We LOVE the new Bayley!

What we hated:
The process of the draft. Having Stephanie McMahon just announce the picks with no reaction from any of the superstars left a lot to be desired. Takes the emotion out of it. While we liked tying in Troy Aikman and the NFL on FOX Thursday & Sunday crew was a nice touch, the “war room” reactions got tiring after the second look-in. Plus, Michael Cole should’ve reinforced that Brock Lesnar, Charlotte Flair, Seth Rollins amongst others couldn’t get drafted until Monday night. I’m sure there were plenty of people who were wondering why the Lucha House Party got drafted before three of the WWE Champions. It’s all in the details people!

Thanks for letting us share my thoughts! Shoot me an email at jcrowe567@gmail.com. We’d love to hear you comments and suggestions! You can also check out my blog, The Crowe’s Nest as we delve into more pro wrestling, sports entertainment and the World of Sports. My apologies ahead of time – I AM a Patriots and Red Sox fan! If you’re not down with that, I’ve got TWO WORDS for you…. NEW ENGLAND!