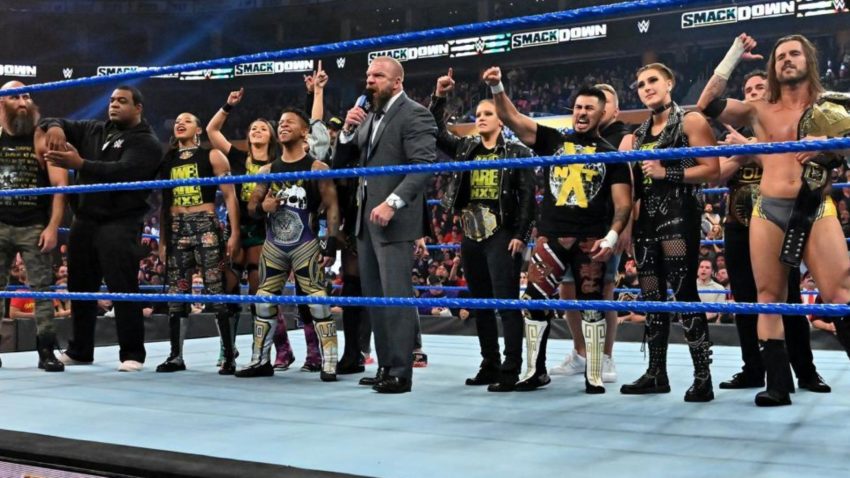 What a strange week it’s been in the WWE! A trip to Saudi Arabia not only gives us The Fiend as your new Universal Champion, crowned on Halloween no less, but it also sets up an historic Friday Night Smackdown! When I first heard most of the Smackdown talent couldn’t make it to Buffalo for the LIVE show, I cringed at what we’d see. But, for the first time in a while, a show not named NXT delivered the one thing it needs: UNPREDICTABILITY! And we got it in spades!

NXT takes over the night on FOX!

Not only do we get NXT Women’s Champion Shayna Baszler punking out Smackdown Women’s Champion Bayley & Sasha Banks, but we get Tomasso Ciampa challenging and beating The Miz! And to boot, NXT Champion Adam Cole cleanly defeats Daniel Bryan, 1-2-3 in the main event!

Then, just to put the cherry on top of the Smackdown sundae, Triple H declares this the first blow in the new war. RAW vs. Smackdown vs. NXT – what do you got next RAW & Smackdown? The build to Survivor Series is set. Now, keeping all shows strong over the next three weeks will be interesting. I’m just not sure if I have enough faith in the creative to pull this one off. But, I’m hoping and can’t wait for the next week of WWE programming. And with pro wrestling and/or sports entertainment, that’s all you can ask for.

My biggest question going forward is this: with Triple H being “the authority face” of NXT, who will that person be for RAW and Smackdown? Will it be the executive directors Paul Heyman and Bruce Pritchard or do we get the McMahons vs. Triple H in an all in the family feud? The other question for the night is where was Finn Balor? Wouldn’t this have been the perfect chance to get back at the bigger brands? Or, will he be a hand played later in the build? And just how will War Games play out in all this, especially if NXT is fighting with themselves during Survivor Series weekend’s kick-off show and then back together to fight RAW and Smackdown? Food for thought indeed!

Kudos for stepping out of the box! When challenged, at least for a night, the WWE delivered.

Holy RKO – You would think one move would get old after nearly two decades, but Randy Orton’s RKO delivers time after time. This time blindsiding Ricochet to give him the DQ win over Drew McIntyre.

Women’s Tag Team – I like the pairing of Charlotte and Natalya and hope they get a nice run together. Maybe a title pairing in future against the Kabuki Warriors would be some nice business! Plus, it’s nice to see The IIconics on TV once again. They’ve been wasted thus far on a tag team title run that went nowhere.

As the Paige Turns – Love the turn on Paige by the Kabuki Warriors! Solidifies them as top heels and gives the opportunity to have Paige seek out a new tag team to bring up to fight against them. Give me more of the green mist!

Becky vs. Kairi – Quality match to start the night off on RAW. The match got better as it went along and builds Kairi Sane as someone as more than just a tag team partner for Asuka.

The vibe of RAW – Monday nights used to be the destination for WWE. The night where “anything” was possible. It seems like the show has turned into jus a run of the mill outing just to fill three hours on the USA Network. For a Falls Count Anywhere match that Vic Joseph kept hyping could go anywhere in St.Louis, the match went to the concession stands and back to the ring. Ho-hum. Plus, we get a King’s (Divorce) Court with Jerry Lawler, Rusev, Lana and Bobby Lashley in the main event. Heading into a PPV, Crown Jewel, it’s not quite what we should get. This is more of mid-night filler than something to pay off the night, especially when they don’t have a huge one-on-one match at the PPV. And now compared with what NXT and Smackdown delivered this week, it clearly comes in as the #3 show of the brand.

Humberto Carrillo gets another title match – I surely get trying to build up the younger, newer talent. But, in losing to both Seth Rollins and AJ Styles, it’s not quite the way to do it. Sure, he gets the rub on in-ring combat, but at the end of the day, all we’ve seen him do on TV so far is lose.

Bronson Reed vs. Shane Thorne – For a match with no hype, this one was a barnburner filled with physicality. Kept me on the edge of my seat! No BS. True NXT type match here.

WAR GAMES x 2 – Not only do we get an historic announcement from NXT GM William Regal that the women will battle it out in War Games for the first time, but we also get Tomasso Ciampa declaring war on the Undisputed Era and putting his quest to get his “Goldie” back, the NXT Championship, on hold. For the women, we’ll get Shayna Baszler and Rhea Ripley as team captains in what should be an epic throwdown at the War Games Takeover Special Survivor Series Weekend.

The women’s division – When you talk about where the best is, it’s clearly here! From Bazler to Bianca Belair, from Io Shirai to Dakota Kai and from the Four Horsewomen to Candice LeRae, the women of NXT are outshining their counterparts on Wednesday night at AEW, but also outpacing the women of RAW and Smackdown, and that’s saying something! Kudos ladies!

Finn Balor’s promo – While we welcome Balor Club getting the spotlight to try and explain what his latest heel turn is about, we didn’t really get a full explanation as to why Johnny Gargano was the target. Sure, we got a shot at Bray Wyatt being “cool,” but it needed some more depth especially when there are new eyes on NXT since the debut on the USA Network. They don’t know the backstory.

Full Sail University – Sure, NXT Arena is quaint and cozy, but if NXT really wants to take on AEW’s new momentum on Wednesday nights, it has to get out to bigger crowds. The NXT action and storyline progression speaks for itself, but the perception of the crowds in something the mainstream fan will need to see improved. Perception vs. reality folks. Time to check that box off Triple H! And with what we would see later in the week on Friday Night Smackdown, we now know they, as well as the crowds, can handle it.

The Fiend winning the Title on Halloween – What better way to put The Fiend over then on Halloween! It’s something people can remember easily even if they didn’t watch it LIVE.

Uncertainty – With The Fiend winning the Universal Title, RAW doesn’t have a major championship at the top of its show and I, for one, is happy to see where this one goes. I’m hoping they let it linger for more than a few minutes and have some fun with it.

The women debut – History in the making as Lacey Evans and Natalya hold the first women’s match ever in Saudi Arabia! The pure emotion of the match takes precedence over anything else. Great to see and well done.

Mansoor – A solid match that gives the hometown pop with some raw emotion. Perfect pairing with Cesaro who absolutely made the kid look good.

Only two minutes for Lesnar vs. Velasquez – OK, we get it was going to be short with Velasquez’ knee injury that he could reportedly have surgery on, but I don’t think it helped anyone out other than to say that Lesnar gets the win and now an eventual third bout between the two is coming.

Fury vs. Strowman – Count me as one who wasn’t a big fan of this pairing. It’s a no-win situation as neither side was going to get a clear victory and that’s exactly what we got. A countout by Fury and a slam by Strowman that gives each man with what they walked into the match with, nothing more, nothing less. It gave the WWE some mainstream media and that’s what they wanted.

The red lighting for The Fiend – I get what the intent is with trying to make The Fiend’s matches look different, but let’s be honest, it’s just tough to see through the red tinge in the lighting. Drop it already. It doesn’t work.

NXT! NXT! NXT! – No brainer here! The WWE takes a negative in the travel delay from Saudi Arabia that left all of the Smackdown superstars minus Paul Heyman and Brock Lesnar left overseas and turns it into a HUGE positive! With Survivor Series coming up with RAW vs. Smackdown vs. NXT, the men and women of Wednesday night take the spotlight starting with Women’s Champ Shayna Baszler taking out Smackdown Champ Bayley & Sasha Banks to NXT Champion Adam Cole BAY BAY getting a clean 1-2-3 over Daniel Bryan in the main event! Unpredictable, smart and most important for us the fans – FUN and ENTERTAINING!

Brock Lesnar quits Smackdown – Sure, I would’ve loved to see how RAW would figure out its next champion with The Fiend defeating Universal Champ Seth Rollins at Crown Jewel, but Brock quitting Friday nights to find Rey Mysterio, JR. settles that. The WWE Title is coming home to Monday nights and that’s a good thing for business.

Pat McAfee – On-point, effective and put his stamp on this historic night! He was Paul Heyman-esque on the mic getting the brand and the talent over. Plus, he got in his plugs in too for people to know to watch on Wednesday nights. Brilliantly done!

The downside to a beatdown – Yes, NXT looks awesome, but in the same show, you’re making Smackdown look a little weak. The building them back up will be in the pudding as we ramp up towards Survivor Series. I’m sure Roman Reigns, The Fiend and crew will have an answer.

Thanks for letting us share our thoughts! Shoot me an email at jcrowe567@gmail.com. We’d love to hear you comments and suggestions! You can also check out my blog, The Crowe’s Nest as we delve into more pro wrestling, sports entertainment and the World of Sports. My apologies ahead of time – I AM a Patriots and Red Sox fan! If you’re not down with that, I’ve got TWO WORDS for you… NEW ENGLAND!