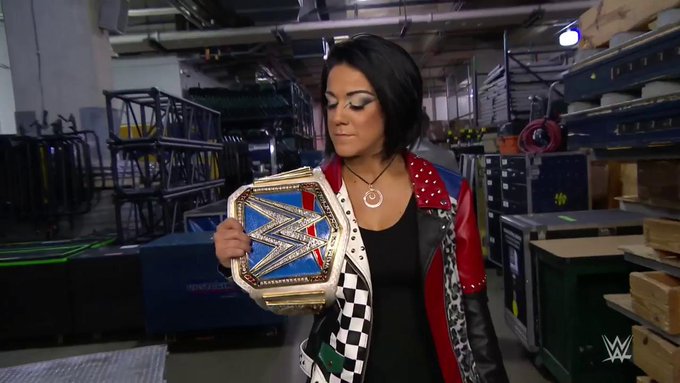 WOW! What a week it’s been for World Wrestling Entertainment. The end to the draft as night two takes place on RAW,  the debut of WWE Backstage on Fox Sports 1, another very solid NXT and a new leader at the top of Friday Night Smackdown on FOX.

If you look at the hierarchy of what the WWE is these days, it’s clearly Smackdown has top priority, with RAW and NXT following respectively. But honestly, this week, the show that stood out to be is clearly NXT. No BS is a perfect slogan for them as week in and week out, they are delivering at top notch caliber. The best “wrestling” of the week is done on Wednesday and clearly, the most energy is there as well.

We will get to the specifics on each show, but what left me shaking my head the most this week was how much lack of common sense there is on Monday Night RAW. For the second straight week, I just didn’t get IT. Sure, the wrestling and the effort was fine, but why we delivered the show we got to watch just didn’t have a continuity sense to me. I’d love to know what you thought!

As for Smackdown, another solid show with an awesome Miz TV that really gets the Bayley heel turn over! More action off the top is a plus and it will be interesting to see what new executive director Bruce Prichard brings to the table moving forward.

For a “preview” first effort for WWE Backstage, count me as one who enjoyed it. Clearly, Renee Young is the star that FOX is betting on (for good reason). She’s really good, especially at being that being a traffic cop that can change topics on a dime. Booker T, Christian and Paige added good “company” talk, but if the rumors of CM Punk coming aboard are true, that would truly be the foil that would make this a must-see TV show. Love the look back at classic matches and the look at “breaking news” with Bruce Prichard and the RAW/Smackdown trade. If it’s truly a show that goes backstage, it has to be a little critical and give me something I can’t get elsewhere. Fingers crossed!

One last thought before we get to the shows – I’ll be happy when Crown Jewel is over! It’s a great card with little build since it’s stuck right in the middle of two PPV’s (Hell in a Cell & Survivor Series), but it’s a card that will be LIVE at 1pm on Halloween Day. Not exactly the prime viewing spot for a card that’s better than some WrestleMania’s and one that the WWE is getting a boatload of money from the Prince to put on. I’m sure most will be watching on delay on the WWE Network after a bit of trick or treating. It would be better served though to have those high profile, mainstream matches with Brock Lesnar vs. Cain Velasquez and Tyson Fury vs. Braun Strowman at big 4 PPV like Survivor Series or WrestleMania instead of a quick build. But, money talks!

The Viking Raiders are new RAW Tag Champs! – Well deserved by TVR. Awesome match where all four guys looked good. Crowd was really into it and they loved the result! There’s something to get behind and go forward with this one. Either a rematch with Bobby Roode & Dolph Ziggler or taking on all-comers, the Raiders will do well if given enough time in the top spot in the RAW tag team division.

Quality in-ring wrestling: Ricochet vs. Shelton Benjamin. Aleister Black vs. Eric Young. Buddy Murphy vs. Cedric Alexander. Give me those type of matches every week. Sure, they’re not part of any feuds, just quality matches made to show off the talent. With a bit more effort, they could be woven into storylines to get my emotional investment.

The main event was the main event why? – Why exactly would Natalya pick Lacey Evans, after a month’s long feud and Evans being drafted to Smackdown, as her tag team partner in a match with the Kabuki Warriors? Why are they getting the match in the first place? Why is it the main event? It all made no sense to me. It was like Paul Heyman just needed something to fill up the time.

The Draft – same as night 1 on Smackdown. No emotion. No reaction from the superstars being drafted. It was just rolled out there to do it. Clearly, Smackdown is getting the high-profile talent with Brock Lesnar, Roman Reigns, Daniel Bryan, Bayley, Sasha Banks, The Fiend and The New Day amongst those going blue. That’s OK. FOX is paying a billion dollars for it.

Hey Lucy, can you explain this to me? – If The Fiend is going to Smackdown, why is there no explanation as to why Seth Rollins is burning the Firefly Fun House down? I get that they will face each other at Crown Jewel, but I thought rosters were supposed to be exclusive moving forward? So are we getting vignettes from Rollins and Bray Wyatt to come on each other’s show without any face-to-face? I’m just confused by it all.

No BS – Week after week, NXT delivers with non-sense, quality. The build for Ciampa vs. The Undisputed ERA is going to be red hot! Kicking off the show with that was the right move. Add in a few squash matches to make Io Shirai, Matt Riddle and the returning Tegan Nox look strong is smart.

The main event – A little surprised that Damian Priest goes over here, but it wasn’t at the expense of Pete Dunne. Both men can walk away in a positive direction.

Finn Balor – “My future will be my past.” Best promo he’s done in quite some time. From the heart, talking about mistakes & missteps and how he’ll make it right. Well done Demon!

Looking ahead:
Kushida could be out for a month after reaggravating his wrist injury. We could surely see a rematch with WALTER down the line.

Velveteen Dream being put out might add a little twist into the North American Title Picture now that champion Roderick Strong’s attempt to not face Dominik Dijakovic and Keith Lee has backfired into a triple threat match. A very heelish move by Strong that gets the desired result for Lee and Dijakovic.

Getting right to it – Starting the show right off with an I-C Title Match between champions Shinsuke Nakamura and Roman Reigns instead of a long-winded in-ring promo is a step in the right direction. Action over words!

Miz TV with Bayley (and Sasha Banks) – One of the best segments of the night. Not rushed. No fluff. And at times, a bit off the cuff with The Miz getting to the bottom of Bayley’s heel turn. Well done, including the shot at Brock Lesnar, “a champ that doesn’t talk” that I hope they use down the line.

Squash matches – The continued use of squash matches to make talent look good. Braun Strowman, not that he needs it, and Shorty Gable both get strong wins in a short amount of time. Gets the point across and moves the story forward.

Why is Daniel Bryan a face now? – Just like Bayley, we need to told a reason why Bryan has turned from the top heel on Smackdown to a babyface. Sure, we get that he wanted to help Reigns at first after being attacked by Harper and Rowan, but that’s now done and he’s sill helping him. Explanation please guys!

No Alexa Bliss – Sure, not showcasing her in the 6-pack challenge #1 contender’s match is ok since you want to prop up others (Brooke, Deville, etc.) that don’t normally get the TV time, but how about using her on commentary to balance out Bayley & Sasha Banks? Just a bit to show she’s still part of the scene. Miss Bliss is a star that needs to be recognized.

Kofi Kingston – another week and no real emotion from the former WWE Champ about his 10-second loss to Lesnar. One line about the power of positivity with Heavy Machinery doesn’t cut it for me. Give me cutting edge interview with Corey Graves to do it. Maybe integrate with Graves’ new podcast?