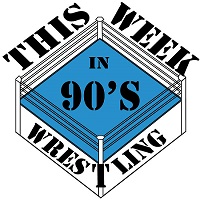 1993
The Honky Tonk Man made a cameo on USWA television, dropping by the studio to complain that because Eddie Marlin had “all-timers” that he was unable to get the type of matches he deserved. After accusing “Little Jeff Jarrett” of receiving preferential treatment, Jarrett came out to defend himself and asked HTM what championships he had held recently, leaving Honky to hilariously respond, “The greatest of all time and that’s all that matters!”

One of the preposterous mini-movies WCW used to promote pay-per-views aired on Saturday Night, In this one, Sting was invited to a party at the White Castle of Fear in the Rocky Mountains. Sting suspected foul play, and images of Vader were repeatedly interspersed in a cloud above his head while covered in fake snow. When Sting arrived at the cave, women were attempting to sexually give him food or something. Sting rattled off a hilariously bad line, “Vader, nice place you have here. Reminds me of your personality – COLD!” Next, they attached themselves to a strap, a fire started and they had a tug-o-war while strangely catchy synth pop played. Sting was almost pulled into the fire, but the video was To Be Continued at SuperBrawl III. To really make the hype as dissonant as possible, Sting sat down with Tony Schiavone for a serious interview later in the show where he talked match strategy. Also on this episode, Cactus Jack and The Barbarian did one of the few interviews from their short-lived babyface tag team run, Barry Windham defeated 2 Cold Scorpio in an excellent, bomb-throwing sprint and WCW U.S. Champion Dustin Rhodes defended the title against Ricky Steamboat in a ***1/4 match that went to a draw.

Eddie Gilbert and Terry Funk squared off in a ***1/2 “I Quit” match at WWA Battle of the Belts in Philadelphia. The match was a nice mix of great brawling, blood, weapon shots and even fire throwing.

WWF Monday Night RAW aired live from Palmetto, FL, in front of a heavily papered crowd of 2,500 fans. In the main event, the Smoking Gunns defeated the 1-2-3 Kid and Bob Holly to win the WWF World Tag Team Titles, cutting off the Kid-Holly title reign one day in. Also on the show, a vignette aired to hype the arrival of Man Mountain Rock, and Vince McMahon issued an apology for Bam Bam Bigelow’s attack the previous night on Lawrence Taylor. He also announced that Bigelow was suspended without pay. The show did a 2.7 rating, and you can watch it on the WWE Network.

1996
WCW aired Clash of the Champions XXXII live from Las Vegas in front of 3,100 fans. The show was headlined by Ric Flair and The Giant teaming against Hulk Hogan and Randy Savage in a match where Miss Elizabeth returned as Savage’s valet. However, the show is most memorable for a match between Eddy Guerrero and Brian Pillman where Pillman rolled out of the ring and a startled Heenan yelled “What the fuck are you doing?” on live television. Also on the show, the Road Warriors returned to WCW and issued a challenge to World Tag Team Champions Sting and Lex Luger. Sting seemed up for the challenge while Luger was more interested in defending against The State Patrol. The show did a strong 4.5 rating. You can watch it on the WWE Network.

1999
RINGS held a show at Budokan Hall, highlighted by Volk Han facing Hiromitsu Kanehara in a **** match. Kiyoshi Tamura also faced Tsuyoshi Kohsaka in a rematch of their ***** classic from June 1998, but they were only given 9:42 this time, so the match felt incomplete.

ECW held a house show in Detroit, MI, which was highlighted by a ***3/4 brawl between Sabu and One Man Gang, who worked really hard and worked like the 1980s Mid South version of himself, when he was considered one of the best big men in wrestling.

Charles is just a wrestling fan who likes talking about wrestling with other fans. He is the owner and admin of ProWrestlingOnly.com and posts there under the name Loss. You can register for an account there by sending an email to pwomembership@gmail.com, and you can also follow him on Twitter at @prowresonly.