I have been a fan of wrestling for over 30 years, and when I look back at the feuds and rivalries, some stand out for the matches that they deliver, some stand out for the personalities that are involved, and some for the intense hatred that the combatants seem to exhibit.  Most feuds seem to last 3-6 months, and then the wrestlers move onto the next phase of their career, the next battle, or even the next feud.  But there are certain rivalries that just never seem to be drawn to a conclusion, certain feuds that last years, cooling off and heating up again in an instant, bringing another chapter and series of matches for our viewing pleasure.  These are the types of feuds that have even the strongest and most knowledgeable fans start to question whether there is legitimate heat and tension between the participants.

In 1993, Bret Hart was coming off his first run as WWF World Champion.  He had been established as a fighting champion, willing to wrestle anyone, and had lost his title at WrestleMania 9 in controversial circumstances.  He had established himself as one of the best wrestlers in the world at this point of time.  Meanwhile Jerry Lawler had been the main player in Memphis for over a decade, and through the association between WWF and Jerry Jarrett, Lawler had become a part of the WWF around the beginning of 1993.  He had been brought in as Mr. Perfect’s replacement in the commentary booth,  also appearing at the Royal Rumble.  And at King of the Ring that year these two men began a feud that lasted for much longer than most feuds for the modern era.  The feud continued on and off for over two years, and even after it apparently finished Lawler continued to bait and tear down Hart on commentary right up to Hart’s heel turn in 1997.  But what really made this feud unique was that it spanned two companies, and that depending on where events were taking place the roles of face and heel were reversed between the two men.

The two men began a series of matches, but not just in the WWF.  Bret Hart also traveled to Lawler’s home promotion of USWA, where he wrestled Lawler there also.  Due to Lawler’s immense popularity in Memphis, and his position as the lead face of the company, Hart was looked at and acted like a heel when he wrestled down there.  Lawler also fueled the feud further through his verbal assaults, not just on Bret but on the entire Hart family.  Lawler made regular disparaging remarks towards Bret’s parents, Stu and Helen Hart, as well as Bret’s brother, Owen.  In fact, Owen was drawn into the feud, as he also traveled to USWA to wrestle Lawler, firstly in a Tag team match with Bret, and then returning to defeat Lawler to capture the USWA title briefly. 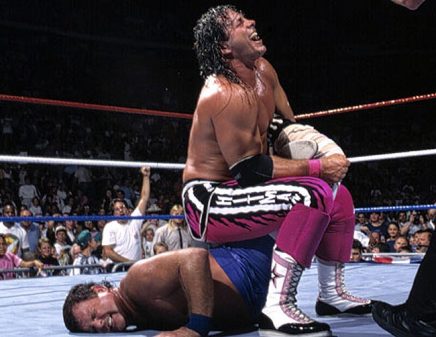 Hart and Lawler battled on several Pay Per View events in both 1993 and 1995.  There were times when Lawler would utilize other competitors to battle Hart yet would be involved at ringside and from the commentary table.  These two men seemed to truly hate each other, battling each other on and off in the ring and verbally sparring and baiting each other out of the ring.  While the feud seemed to reach a conclusion in 1995, Lawler’s commentary during Bret’s matches would continue to be filled with jabs and barbs. Even after Hart had turned heel in 1997, Lawler would still make remarks that made the viewer think that the ongoing tension and rivalry was still there, even though they were now on “the same side of the fence”.

When I was growing up and watching wrestling with my Dad, I remember times he would comment how two partners used to be bitter rivals, and why had they forgiven each other.  I remember Survivor Series 1987 when Ricky Steamboat was teaming up with Randy Savage, the man who tried to end his career less than 12 months earlier.  Too often wrestling storylines seem to overlook the history between two men (or women) for the sake of the current match or story.  What made the Hart vs Lawler feud so great and memorable was that these two men appeared to hate each other, and no matter what else happened in the company over the next few years, they continued to hate each other 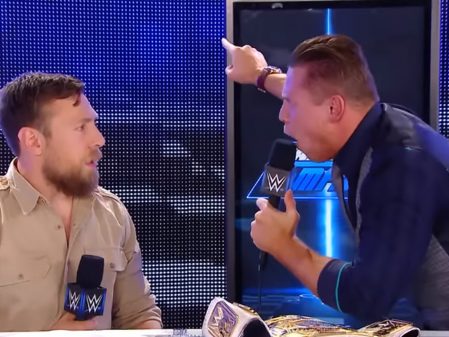 As we approach Summerslam 2018 I am very excited for the match between Daniel Bryan and the Miz, because it has so many hallmarks that remind me of the Hart vs Lawler rivalry.  The Miz and Daniel Bryan have been at odds for 8 years, since Bryan’s entry to the company.  And through that time they have consistently been at odds, even when not involved in direct storylines.  The Miz has questioned Bryan’s ability in the ring, proclaimed his superiority at any opportunity, verbally disparaged and barraged Bryan.  Bryan has won matches against the Miz, reached the pinnacle of the business, yet also had to battle injuries, and throughout that time he has never been able to move past this rivalry as it has been so personal between them, as the best rivalries are.

Bret Hart and Jerry Lawler seemed to truly despise each other, just as the Miz and Bryan do now.  As a fan I truly can’t tell if it is just part of the storyline or of it is genuine.  This is the wrestling business at it’s finest:  being able to make the fans question whether what they are watching is real.  What I do believe is no matter what the outcome of the match at Summerslam between Miz and Bryan, this rivalry will continue just as the rivalry between Bret Hart and Jerry Lawler did.  Who knows, maybe Daniel Bryan vs The Miz will main event WrestleMania in the next couple of years……