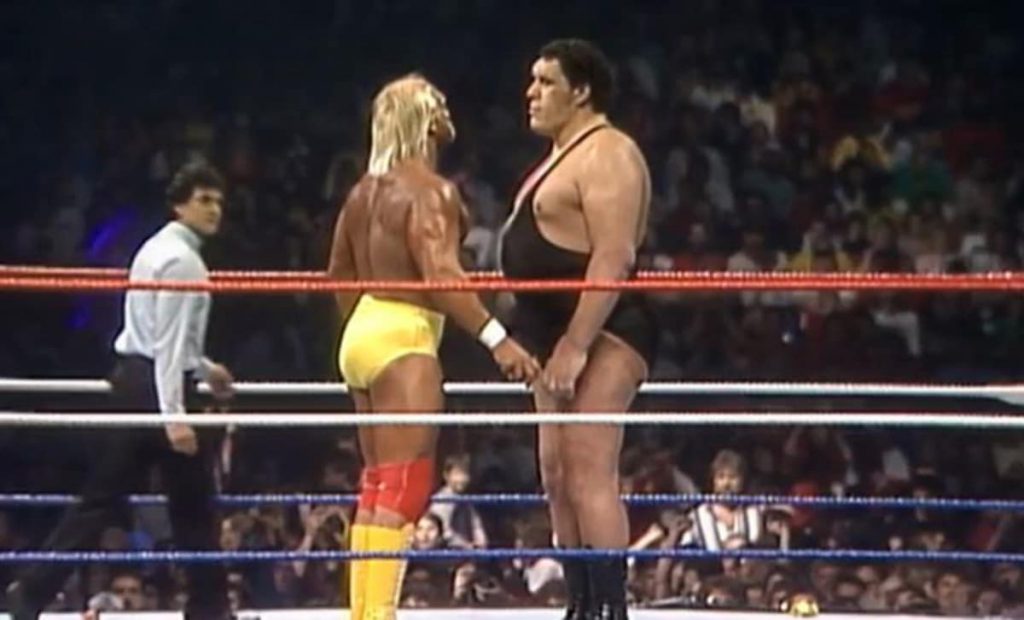 “The Irresistible Force and the Immovable Object”

Hulk Hogan vs Andre the Giant

At it’s very core, Professional Wrestling is very simple.  The goal of a promoter is to find a match that the audience want to see and will pay money to watch.  Over the years, the advent of major television shows like Raw and Smackdown, and the reliance on Pay Per View shows as the major money winner have changed the focus of how wrestling is presented, but at it’s core it is still about putting on matches that people are willing to pay money to see either in person or on Pay Per View (or the WWE Network).  With the ever-increasing number of shows to watch, there is a direct reduction of match-ups that wrestling fans have never seen, match-ups that are “must-see” events.

In 1987, the WWE (then WWF) were on the build-up to WrestleMania 3 when they shocked many fans and put together one of the biggest rivalries the Wrestling industry, up to that time, had ever seen.  Andre the Giant, possibly the biggest world-wide attraction in the Wrestling industry at that time, turned heel to face Hulk Hogan in the main event of WrestleMania 3.  At the time, this was undoubtedly the biggest match anyone could think of.  Andre, while moving into the tail-end of his career, and beginning to struggle physically in the ring, was still presented as a near unbeatable, while Hogan was at the top of the industry, the biggest drawing champion in WWE history at that time and the foundation of Vince McMahon’s expansion.

The build-up was brilliant, and had fans drooling at the prospect of the match.  During 1986 Andre had taken time-off from wrestling to allow some injuries to heal and film “The Princess Bride”.  (if you have never seen this film, stop reading this article right now, watch the movie, then come back and finish this article).  In storyline, Andre was suspended for missing a tag match against King Kong Bundy and Big John Studd, managed by Bobby Heenan, whom Andre had been feuding with for nearly 3 years.  During July-August 1986 he returned to the company under a mask as The Giant Machine.  Heenan publicly called out the Machine as Andre, and WWF president Jack Tunney promised to suspend Andre for life if it was proven he was the Giant Machine.  Then in December 1986 the suspension was suddenly lifted, and Andre was permitted to return to the ring.  Heenan said nothing about this.

Then in early 1987 the story began to unfold as over a 4 week period both Hogan and Andre were presented with trophies on Piper’s Pit for their achievements in the ring, but Andre was visibly annoyed at the size (or lack of) of his trophy.  Then on the fourth week Andre confronted Hogan on Piper’s Pit, accompanied by Bobby Heenan, and challenging Hogan to a World title Match at WresltMania 3, before tearing off Hogan’s T-Shirt in a truly memorable moment.  The stage was set, and everyone was clamoring to see Hogan and Andre meet at WrestleMania 3.  And the reason was simple:  Andre had never been presented as a heel, and no one had seen Hulk Hogan face Andre the Giant in this way.  While it is true that the two men had met in 1981 for a series of matches when Hogan was a heel, this match truly came across as two icons in the industry who had never met in the ring, with Andre’s shock heel turn the catalyst.  The audience wanted to see this.

What really made the match an even bigger attraction was that Vince McMahon essentially kept them apart until WrestleMania 3. There were no house-show matches, no surprise matches at Madison Square Garden, no tag team encounters involving both men.  There was one encounter in a Battle Royal at Saturday Night’s Main Event, during which Andre decimated Hogan in the ring and eliminated him, setting him up as a genuine threat to the World Title, but apart from this the two men were kept apart in the ring until the Main Event at WrestleMania 3.  And what a match it was, truly living up to the moniker of Main Event, and Hogan coming away with the win. But there was an early near-count that created an ongoing storyline that dragged this feud out for another 16 months.

The intentional keeping apart of these two huge stars and rivals is what truly made this rivalry so great.  Andre went on another hiatus, and did not return to the ring until Survivor Series 1987, 8 months after their first encounter, for his first return match with Hulk Hogan.  This time Andre got the win, as sole survivor, ensuring that he was still viewed as a viable challenger for Hogan’s title.  They were again kept apart in the ring for another 4 months, having their third encounter at The Main Event in February 1988.  The lead-up included a public contract signing at the first Royal Rumble, where Andre again turned the table over on Hogan, literally.  A tainted win to Andre at the Main Event, and his subsequent handing over of the title to Ted DiBiase immediately after, set the stage for WrestleMania 4, and the third singles encounter between Hogan and Andre.  Unfortunately by this time, the lustre was a little off the rivalry and this, combined with the World Title Tournament storyline, resulted in this match meaning so much less than the previous one.  The two men then were kept apart until they met in a special event in Milwaukee:  WrestleFest 1988, where they faced in a cage match that was recorded for VHS distribution.  This time Hogan won decisively, effectively ending the rivalry.  One final tag match at Summerslam 88 put the exclamation mark on this classic rivalry, Hogan coming out on top, and Andre moving down the card to help elevate other faces on the roster. 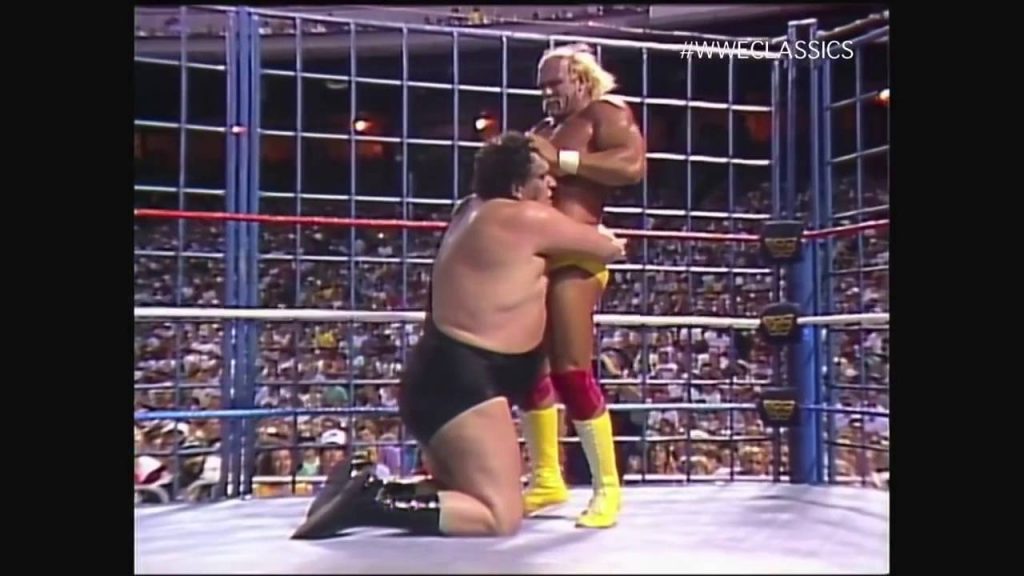 What made this rivalry truly great was how Andre and Hogan only had 5-6 matches together in the ring from February 1987 until August 1988.  Each match was made to feel big and significant, was promoted well and continued to highlight the danger Andre posed to Hogan in the ring.  There were no weekly run-ins, no back and forth booking and no overbooked finishes.  This rivalry was made to feel like a main event that you could not afford to miss seeing.  WrestleMania 3 and The Main Event were among the most watched matches in the history of the WWE.  The rivalry was able to last as long as it did as it was not overexposed.

Sadly in the modern-era of WWE, it is difficult for the company to put together a match that the audience has never seen.  In a bid for television ratings, or immediate boost to business, matches are often fast-tracked with very little build-up.  The recent Survivor Series encounter between Brock Lesnar and Daniel Bryan is a prime example of a sudden shift in booking with little build or thought, and a match-up that could have been truly intriguing and drawn a massive audience was instead handed to the audience with less than 1 week’s build.  Some matches get thrown out so often, that when they try to promote them as a main event of a major event (eg:  John Cena vs Triple H), it just falls flat.

There have been some occasions in the past 20 years where the company has stumbled upon a math that captures the imagination of the wrestling fans, and is booked in a way that makes it, and any subsequent matches, feel truly epic.  The “Once in a lifetime” match between The Rock and John Cena had this feel, with a 12 month build which saw a lot of verbal sparring, but no in-ring encounters.  The return match, 12 months later, had a similar feel as Vince McMahon again kept them apart in the ring, making their match one that fans wanted to see.  So to, the return of Goldberg several years ago to face Brock Lesnar also had the massive rivalry feel.  Their first match was epic, and then there was the slow build to the rematch at WrestleMania, which drew a lot of eyes upon it.  In fact, the way the WWE books Brock Lesnar in general makes him feel special and “big time”.  While a lot of wrestling fans criticise the very light schedule of Brock Lesnar, the fact that he appears so infrequently both on screen or in the ring means that each time he does it feels big and special, and most of his matches do feel unique.  It is just a shame that his recent encounter with Daniel Bryan was fast-tracked rather than built over time, especially in light of the match the two men put on in the ring.  They made me (and I assume a lot of the audience) feel that Bryan may just pull off the upset win.  Imagine if this had been built up for a series of weeks, or even months….. it may have delivered a truly epic encounter for the ages.

In an era when so many match-ups are seen on weekly television to the point that very few matches seem special when they occur, it is important for the WWE, and any other company that promotes wrestling in the world, to look back at what worked so well in the Hulk Hogan and Andre the Giant rivalry if they want to capture the hearts and eyes of the wrestling fans around the world.  There are still some match-ups that would create genuine interest among fans, either due to competitors not currently being in the same company, on the same show, or because they have been kept apart (unintentionally) for such a period of time that if they were to meet in the ring, with the correct build-up, then they could present a match that will be remembered through history, just as the Hulk Hogan vs Andre the Giant main event at WrestleMania 3 is viewed as one of the greatest ever.