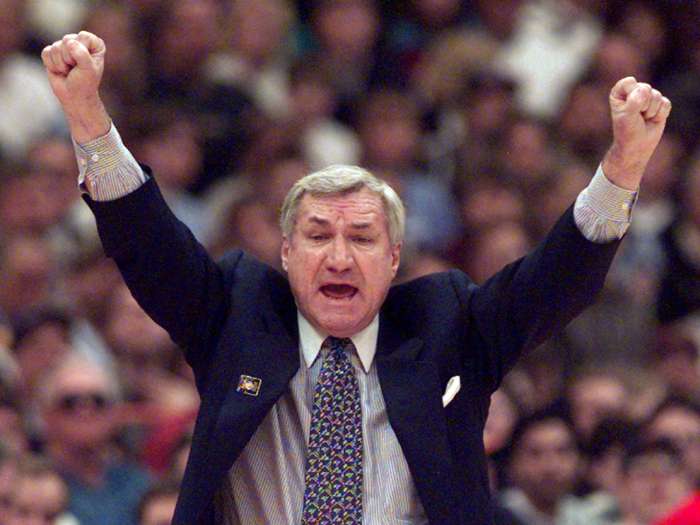 Whenever a man or woman of sizable stature leaves this life, we have a tendency, as results-oriented society, to focus on empirical data of what he or she has done rather than the lively intangibles of what he or she has left behind. In the case of Dean Smith, who passed away on Saturday night at the age of 83, his accomplishments as a basketball coach are numerous almost beyond compare. When he retired in 1997, Smith left the game of college basketball as the winningest coach in Division I history with 879 victories. That record lasted 10 years before fellow coaching legend Bobby Knight broke it, and he retired soon after. During his 36 years as the head coach at the University of North Carolina, Smith won 17 ACC regular season titles and appeared in 11 Final Fours, including 2 national championships in 1982 and 1993. He was inducted into the Naismith Memorial Basketball Hall of Fame back in 1983, when Michael Jordan was still a Tar Heel. When the College Basketball Hall of Fame announced their inaugural class in 2006, the two coaches inducted were Smith and the late John Wooden. Many have to be reminded of the fact that he won an Olympic gold medal as the head coach of the United States men’s basketball team in the Summer Games in Montreal. When FIBA announced their own Hall of Fame in 2007, Smith was in that inaugural class, as well.

The accolades are plentiful enough to fill book after book when it comes to Dean Smith as a basketball coach. But what truly marked Smith’s greatness was not simply as a coach but as a champion of moral values, a life teacher, and a man of faith. The sports world likes to simplify the influence of coaches in their respective sports by connecting their assistants or former players’ future careers under his wing. When Bill Walsh passed away years ago, much was made of the “coaching tree” that he was the stem root of in the NFL for later coaches like Mike Holmgren, Dennis Green, and Mike Shanahan. Dean Smith’s coaching tree, by that regard, is just as impressive as he taught future coaching legends like current UNC head coach Roy Williams, Billy Cunningham, Larry Brown, George Karl, Doug Moe, Bill Guthridge, and Eddie Fogler. But to simply categorize Dean Smith’s many relationships at North Carolina like a spreadsheet would be missing the whole point. It was Smith’s homegrown humanism and genuine care for all his players and coaches beyond the game of basketball that have given the North Carolina program a familial sense of belonging. Smith’s tree of inspiration goes beyond the X’s and O’s (which he was an innovator at drawing up) or the players he brought (which include arguably the greatest of all time) but resembles a tree of life, always prospering and continuing to teach its importance long after the final horn was blown in Chapel Hill.

Dean Smith is a great base for such a rich growth of inspiration and understanding because he himself was a descendent that dates all the way back to the creation of the game itself. Growing up in Emporia, KS, as the son of two public school teachers, Dean went on to attend the University of Kansas and played under legendary coach Phog Allen, who had learned the game directly at the same school from its inventor, Dr. James Naismith. Smith played on a Jayhawks team that won the NCAA championship in 1953, and he immediately became an assistant coach under Allen. After a three-year tenure as an assistant coach at Air Force (during which time he was also the head coach of the baseball and golf teams), Smith went to North Carolina to join Frank McGuire, who had just recently won a national title against a Kansas team led by Wilt Chamberlain. When McGuire was forced to resign due to scandals involving recruiting and point shaving, Smith stepped in at the age of 30 in a role that he would not relinquish for 37 more years. His only losing season was his first one in 1962, but what set Dean apart was the fact that nothing came easy for him as a head coach. From 1967 until 1981, Smith led the Tar Heels to the Final Four six times and came up empty each time. His prominence in the value of human rights (and as a political Democrat) placed him in the forefront of controversial events like the integration of the first black player in the school’s history in Charlie Scott in 1967. He was staunchly against the war in Vietnam (as well as the most recent war in Iraq), believed in desegregation and gay rights at a time when both stances had their share of detractors, and once lectured the governor of North Carolina during a hearing for a death row inmate stating that the death penalty makes murderers of us all. Months after his retirement, Smith was named Sports Illustrated’s Sportsman of the Year and given the Arthur Ashe Courage Award by ESPN.

Dean Smith was opinionated, but based on the proper merits of nobility, human dignity, and family values. But you would have never known that if you ever tried to have an interview with him because of how casual, humble, and selfless he was when it came to garnering attention. What made Dean Smith stand out to me as a basketball coach more than blazing caricatures like Bob Knight or wisdom whisperers like John Wooden was what he strived for in life: His ability to be appreciated not as a godlike figure but as merely a man of principle. Even in today’s age of social media, it is more difficult than ever for laymen to find mutual respect with legendary sports names regardless of occupation or prominence. That has become even more difficult in the later years for coaches like Wooden, Knight, Jim Valvano, Mike Krzyzewski, or Rick Pitino whether it be in absence or in reverie. But the beauty of Dean Smith was how approachable he was in comparison to the bombastic and sometimes otherworldly nature of high-stakes sports. Smith was a man of principle but never wanted people to mistake himself as the principle for what college basketball coaching is or should be, even if he was right all along. He refused to let something as simple as a game dictate what made his life so special and uplifting, even though Smith spent most of his hours as a tirelessly running drills and mentoring his players in practice.

It is almost fitting that the two national championships won by such a humble man like Smith not only occurred in the same building (the Louisiana Superdome) but also took a backseat to critical moments like Michael Jordan’s game winning shot, Georgetown’s Fred Brown throwing the ball away, or Michigan’s Chris Webber calling a phantom time out. But regardless of the endless list of NBA stars and Hall of Famers that played under him (Jordan, James Worthy, Sam Perkins, Walter Davis, Bob McAdoo, Brad Daugherty, George Lynch, Vince Carter, Jerry Stackhouse), it was the short head coach with the lightly colored suits who always had his voice heard the loudest despite never using profanity. Smith’s passing hits home a little bit for myself as I was a huge fan of Michael Jordan (who claimed he was like “a second father” in his life) and rooted drastically for the Tar Heels to take down the Fab Five and see the elder statesman repeat the Superdome magic in 1993. I saw that Dean Smith magic once again many years later in Game 6 of the 1997 NBA Finals when, during a timeout late in the game, Jordan whispers to Kerr to be ready to shoot if the ball comes to him. Just as he predicted, Jordan passed the ball to Kerr off a double team, Kerr made the shot, and the Chicago Bulls won another NBA Championship. Jordan knew that feeling already because as a freshman at North Carolina, down 1 point to the Hoyas, Smith told his third offensive option that if the ball comes to be ready to take the shot. One play later in the Superdome, the legend that eventually became Hir Airness was born. Jordan, in his Hall of Fame induction ceremony in 2008, said that there would be no Michael Jordan without Dean Smith.

While Jordan as a pupil alone is enough for many teachers to ride off into the sunset, Dean Smith was a unique man in that his spirit was continuously replenished by teaching his kids about being a pleasant servant to the wonders of life, not just basketball. He may have coached his last game more than 17 years ago, but it is in times like these where moral values and sticking to your principles can get easily lost in the shuffle that a man like Dean Smith is missed even more than ever. So many sports figures fall under the trap of being legends in their own mind. Dean Smith was one of the rare sporting greats who was a legend in everybody else’s mind except for his own. He lived his life the same way he wanted you to live yours, and that victory in life felt a whole lot better than any of his hundreds of wins on the court.