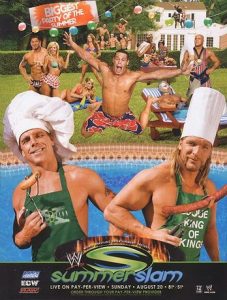 Good Lord, I hate that poster. Really, the whole Degeneration X 2006 reunion drove me crazy. The beginnings were good, with the random crotch chops and the allusions, but once the duo became about finding new ways to say that Vince McMahon enjoyed male genitalia, it just became too much.

A tag team between DX and the McMahons was one of the featured attractions at this year’s SummerSlam, and while the McMahons have been seen to be competitive in big matches before, this time around they turned the match into an overbooked circus filled with male cheerleaders, Samoan bulldozers, giants and SmackDown midcarders. The match was 12-2 at various points, and yet, Triple H and HBK managed to overcome and stand tall at the end of the match.

I enjoyed the match, but much like the whole show, it was good but not great. Not a whole lot of top notch matches this year, but some fun stuff regardless.

Best Match: Edge (c) defeated John Cena – WWE Title Match. In a year where none of the show’s matches were out-of-this-world amazing, a main event match between two guys in their primes who could go is going to take the top spot. The Rated R Superstar is easily Edge’s best gimmick, enhanced by having a scantily-clad Lita with him. The special stipulation to the match is if Edge gets DQed, he loses the WWE Title, so when Lita tosses him a chair mid-match, Edge’s reaction is priceless. And Lita basically giving herself an AA/FU/Whatever it was then was fantastic, too.

Worst Match: Big Show (c) defeated Sabu – Extreme Rules ECW Title Match. Up until WWE decided to use WWECW as a developmental show, the main event scene of the brand was really terrible. Putting the title on Big Show was a response to Rob Van Dam getting popped for pot use after he won at One Night Stand, but the real punishment was on the fans who had to put up with crap like Big Show vs. Sabu.

More Guerrero Goodness: WWE exploiting Eddie Guerrero wasn’t exclusive to WrestleMania in 2006, as Eddie’s nephew Chavo interfered in the main event of the Great American Bash to cost Rey Mysterio his World Heavyweight Championship to set up a midcard match at SummerSlam. Sounds about right. It was an average match punctuated by this moronic statement by color commentator JBL: “The biggest comeback since the resurrection!” Come on, dude.

Just Quit: Coming close to the worst match on the show is the I Quit match between Ric Flair and Mick Foley in a match where I could not tell who was the heel and who was the face. Both guys came off like jerks in the match and the prematch segments leading up to it. But Foley had Diva Melina worried about him, so I’m guessing we were supposed to cheer him. I really just cheered when the match was over.

Battling Over Brooke: One year removed from main eventing SummerSlam against HBK, Hulk Hogan went on third in a one-on-one match against Randy Orton, set up by Orton wanting to take Hogan’s daughter, Brooke, out on a date. While Orton was still building himself back up after his disastrous World Heavyweight Title reign, he never really felt like a threat to beat Hogan, so Hogan getting his hand raised was no surprise in the end. Overall, another disappointing outing for this show.

Promo Pummeling: The World Heavyweight Title Match between champion King Booker and Batista came just weeks after the pair got involved in a brawl during the filming of the SummerSlam commercial. According to legend, Booker beat the crap out of Batista in a shoot. I assume the behind-the-scenes brawl was better than the match the pair had at SummerSlam, since they went 10 minutes to build to Queen Sharmell interfering and Booker keeping his belt. They could have cut that down and no one would have minded, I bet.

We’ll keep the same rankings as last time, thank you very much.