In this edition, the dark reign of Triple H continues! 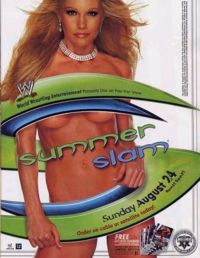 After the success of the first Elimination Chamber at Survivor Series 2002, WWE brought it back for SummerSlam 2003 as a way to hold off the inevitable one-on-one confrontation between Triple H and Goldberg, who debuted with the company the day after WrestleMania. Most people expected to see Goldberg cut through the competition like a hot knife through butter, which he did. It was what came after that people complain about to this day. An injured Triple H, who spent the entire match recovering from some Sweet Chin Music, gets up to face Goldberg and dodges a spear attempt by whacking Goldberg with a sledgehammer. Triple H lives to fight another day.

I understand why people are upset about the way this match ended, but I see what WWE was going for here. Triple H was always trying to be like his idol, Ric Flair, and the ending of this match is classic Flair – getting help to retain his title to build to a bigger match down the line. So, Triple H retains to set up the next match the following month.

After the way he beat Booker T at WrestleMania, it’s understandable why people were so down on the way Triple H won here, but there is a way of looking at it where it makes some sense.

Best Match: Kurt Angle (c) defeated Brock Lesnar – WWE Title Match. Nothing like a title rematch between two amateur greats who turned into professional legends faster than anyone could have expected. I wasn’t a fan of the involvement of Vince McMahon – I wasn’t watching SmackDown at the time, so I have no recollection of that OR of Vince’s casual outfit phase – but the match was still aces.

Worst Match: Kane defeated Rob Van Dam – No Holds Barred. Kane is newly unmasked here and unhinged after losing to Triple H, and is now taking things out on his former tag team partner, Rob Van Dam. So, we get a No Holds Barred match at SummerSlam 2003, surely a thrilling endeavor for everyone watching. At least it was short… Oh, wait… at almost 13 minutes, it’s the third longest match on the card! Definitely a cool-down match between two world title bouts, but still… man, that was rough. The most interesting part of the match was the ad for WrestleMania XX that came down the corner during the match.

Another Weird Debut: During the WWE Title match, Michael Cole on commentary called Brock Lesnar a “lunatic fringe.” Maybe that’s the real reason he and Dean Ambrose were feuding earlier this year.

Family Feud: In addition to Vince interfering in the WWE Title match, SummerSlam had even more McMahon involvement, as Shane McMahon had another match in defense of his family’s honor. This time, it was a Falls Count Anywhere match against Eric Bischoff after the Raw General Manager went after Shane’s mother, Linda. The match was what it should have been – an overbooked mess that featured involvement from Coach and “Stone Cold” Steve Austin. It was a fun match, but even 13 years ago, it was McMahon overload.

No new editions this time around.