Buddy Landel vs Charlie Fulton
We start immediately in the midst of the match. Two exchange arm holds until Fulton gets the upper hand and controls nearly the entire match by cutting off Buddy’s comebacks. Eventually, Landel hits a backdrop and gut-wrench suplex out of nowhere for the win.

Match Notes
This wasn’t particularly engaging, and really only seem to serve as background noise for Bob and Davy to hype what’s to come, including an appearance by someone named Ninja.

Jake Roberts, accompanied by Wahoo Mcdaniel, is here to air his grievances with Ole and Gene Anderson, who have apparently been using underhanded methods in their matches. Jake sounds genuinely upset about everything and really does an incredible job of giving a subdued promo that shows the whole mess has him sullen and troubled.

Jake Roberts and Paul Jones vs Ole Anderson Super Destroyer
The match starts with some good back and forth action and quick tags, followed by a nice heat segment on Jake’s arm. He slips out to make a hot tag to Jones, but the Destroyer sneaks a foreign object from his tights for the nefarious win.

Match Notes
Nothing spectacular, but some solid action. Jake makes an awesome face in peril with great selling and executes an excellent move to sneak away for the tag, rolling away from Ole’s elbow drop.  And to top it off, he dives for the tag to really sell his desperation. He’s always finding cool ways to transition between segments within a match. Jake has always been known for his solid psychology, and these matches prove that he developed that reputation for a reason.

We cut back to Jake, who hammers home his disgust. He reassures the audience that he won’t cry, which isn’t absurd, because it looks like he seriously might in this promo. A great example of Jake’s method of delivering an excellent, intense promo without having to scream and yell like a lunatic. This kid is going places.

The tag champs Ole and Gene Anderson are out next, and I’m a little confused because Ole suggests that Gene was actually the masked man in the tag match. Regardless, Gene Anderson looks like Tom Hanks soaked in bourbon, and he has a constant eye and neck twitch, which could either be him selling his character or an actual medical condition. With Ole constantly running his mouth and Gene just being gruff, the Minnesota Wrecking Crew have a cool dynamic.

Jimmy Valiant vs Ricky Harris
The boy from New York sweeps Harris a few times and shakes his keister to celebrate. Harris’s strikes are not enough to stop an elbow drop from the “cranked up” Valiant.

Match Notes
My dad has a lot of friends who look like Jimmy Valiant. That’s all I got for this one.

Jimmy Holiday and the Ninja are out for a pre match interview. Holiday introduces Ninja, who is NOT Kabuki, by reading an article from the local newspaper that outlines the characteristics of ninjas, including that they can “gyrate like acrobats.” Ninja appears to be holding some kind of relic–possibly a ninja insignia? I should read the rest of Holiday’s very informative article to find out. 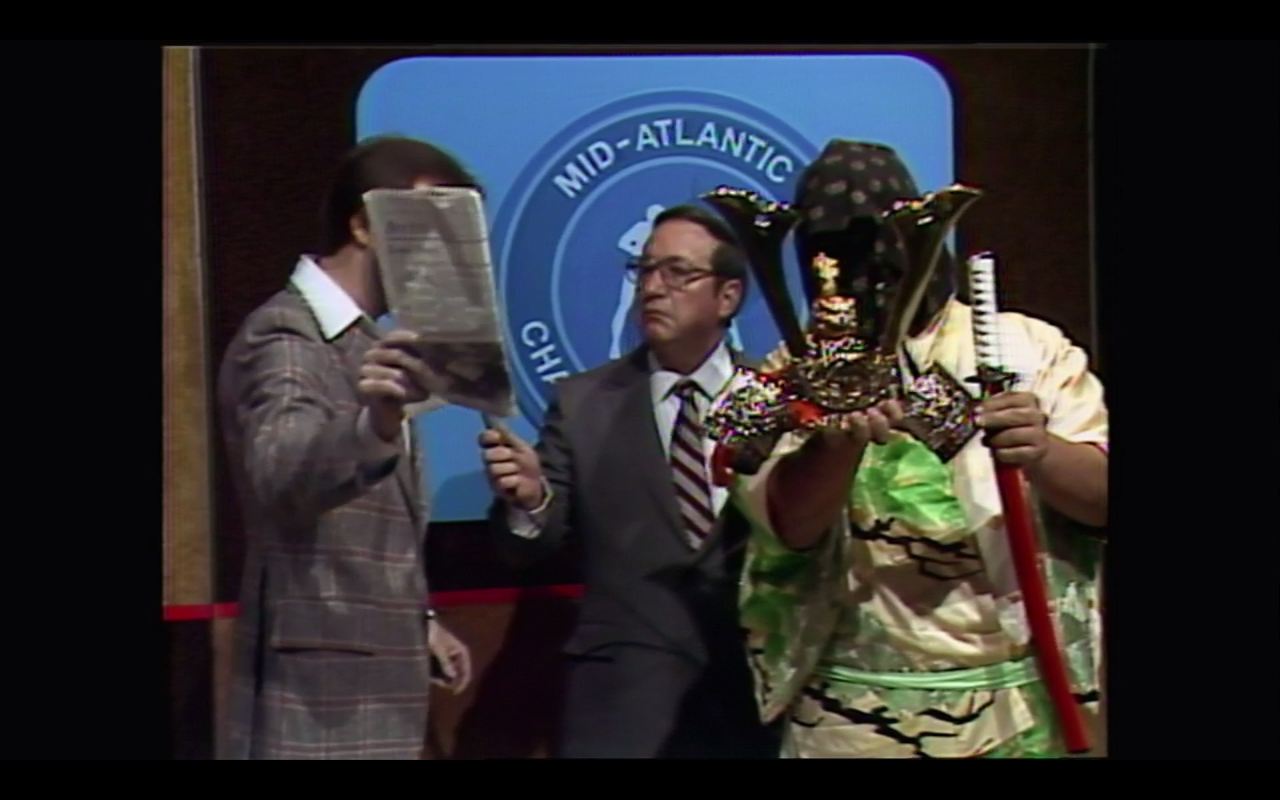 The Ninja vs Mike Davis
Ninja drags Davis around the ring, laying in the occasional chops and kicks. Davis musters up a few strikes that don’t phase Ninja at all, and he finishes poor Mike with a diving headbutt from the middle rope.

Match Notes
Not a whole lot to talk about as far the match goes, but I have to figure out this Kabuki deal. It would appear that Ninja is the same guy as Kabuki from a few weeks ago, but due to my ignorance, I did not realize the Kabuki I was seeing was actually a Kabuki imposter. Boy, do I feel like a fool who needs to brush up on his Kabuki knowledge. I cannot believe Mid-Atlantic would betray my trust like this.

Announcing Aside
Bob actually calls Ninja’s headpiece a “head thing.” I love how inquisitive they are about each wrestler’s motivation, always pondering: Is it for competitive advantage? Is it for fashion? Also, I must say David is starting to grow on me a little. I’ve started to understand that some of his stammering is fine and shows his personality. We’ll see how it goes.

Mid-Atlantic Champion Ricky Steamboat comes out to offer some analysis of Ninja. Even though his chops are devastating, his attire looks like Halloween come early. Apparently Steamboat was breathing fire even at this point in his career with these sick burns. Leroy Brown pops in to call out Slaughter, or, as Leroy dubs him, Gomer Pyle. The faces are just letting the barbs fly tonight. 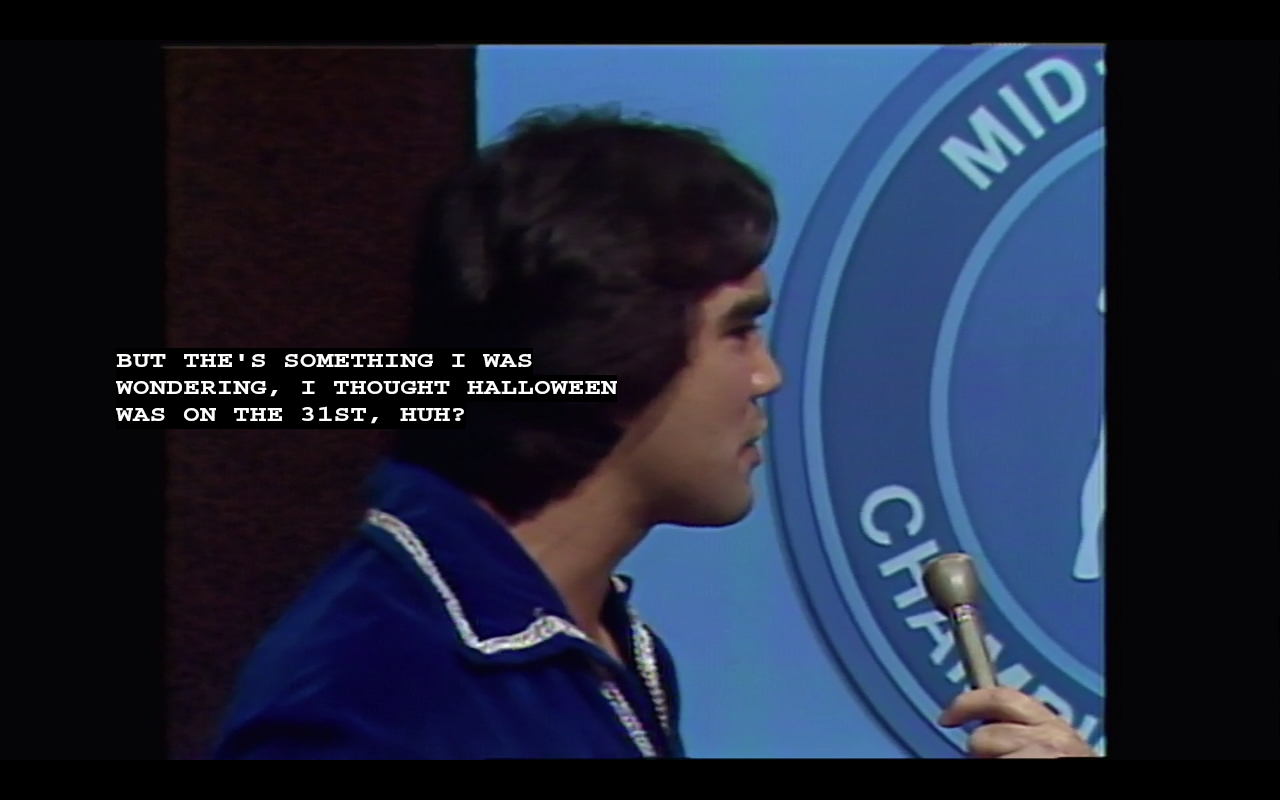 Kris Markoff vs NWA TV Champion Ron Bass
These two have a nice quick brawl that never really slows down. Markoff put in quite a bit of offense until Bass gained some momentum, only for Lord Alfred hop up on the apron for disqualification.

Match Notes
I love that Markoff is just from “Russia.” No town, or area—just Russia, which is enough to gain some considerable heat. Not sure how Shania feels, but Bass never impressed me much in WWF, and he hasn’t done much to show he was much better here.

NWA US Champion Sgt. Slaughter vs Don Kernodle
Kernodle hangs with Slaughter for a few minutes, even getting Sarge to sell some arm work, before eating some vicious slams and never gaining control again. He fights for a few seconds in the cobra clutch, then slowly fades out. Slaughter’s offense looks brutal as always.

Match Notes
During the match, Bob and David mention that Jim Nelson has been standing ringside at attention wearing camouflage.

More importantly, there is a strange moment during the match where, for a split second, the tape cuts to a man in a year sweater speaking directly to the camera. Maybe someone at the office decided to tape over some daytime TV for this episode. Regardless of why, I need to know the identify of this mysterious man. Really, if you know, please tell me.

We end with the Carousel of Promos. First, Piper, draped in a sport coat with the sleeves dangling, opting to wear it like a cape, gives a quick general tirade against the faces. Next, we get an explanation for Nelson being ringside. Slaughter says that all the wrestlers have been asking to be Marines, and he has found himself a trainee in Jim Nelson. Slaughter immediately has him drop and do push ups.

Nelson does a good job of playing an obedient grunt. I wonder if he was picked for this spot due to the size of shaved dome. Also, Slaughter could end the droughts of the 1930s with the spit that fluies from his mouth during these interviews.

Finally, Ivan Koloff closes the show by saying that if he faced Ron Bass, there would be no disqualification because he would wear him out. Koloff sounds like the Russian Cookie Monster.

MVP: Jake Roberts
He didn’t have much competition on this show, so it didn’t take much to have both the best match and promo under his belt. I would really like to see a consistent feud for Cowboy Jake moving forward.

If You Only Watch One Match: Jake Roberts and Paul Jones vs Ole Anderson Super Destroyer

Overall Impression: This episode just felt mostly flat and uneventful. It didn’t feel like much was being built, and many of the matches felt lame, especially the mid-show one-two punch of a Ninja and Jimmy Valiant squashes. Definitely the weakest outing thus far.