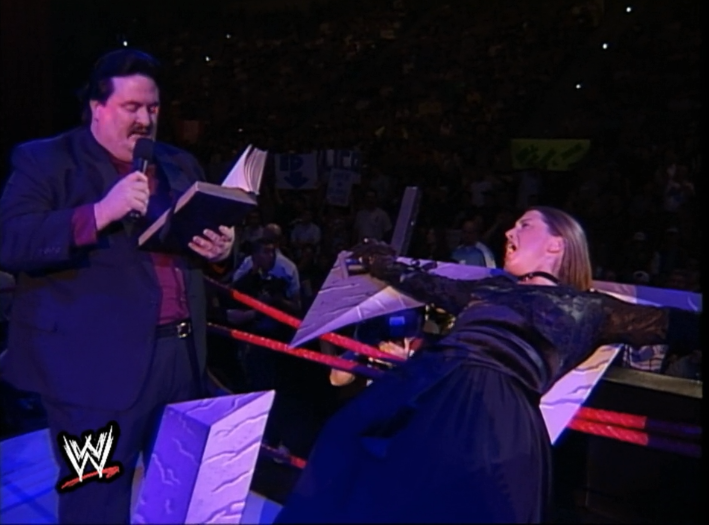 So we are the night after Backlash 99, as the show closed with Undertaker KIDNAPPING the virginal Stephanie McMahon in one of the most infamous segments in wrestling history.  And then it gets WORSE…

The Rock joins us to start as the crowd is just WAITING to turn him babyface once and for all.  Rock talks about how he kicked Austin’s ass and walked out with his head high, the People’s Champ.  And then he leads the fans in chanting his name and calls out Shane McMahon so that everyone knows it’s OK to cheer him now.  Shane McMahon and the Corporation are out, and Shane clarifies that it is ROCK who is the piece of monkey crap, not Shane.  THEM’S FIGHTING WORDS.   Which Rock confirms.  Aaaaaaaaand…the Corporate Beatdown commences with Shane and HHH laying Rock out and choking him out with Bossman’s nightstick.  And then Rock pops up again and challenges Shane tonight, and damn if he isn’t the #2 babyface in the company in one segment.   This was masterful stuff from Rock to turn himself.

Meanwhile, Vince threatens bad stuff if anything happens to Stephanie.

X-Pac’s music craps out during his entrance and my immediate reaction is “WTF is with the Network tonight?”  I’m conditioned to it now, I guess.  X-Pac gets beat up by Gangrel in the corner but makes a hot tag to Kane at 90 seconds in, and he destroys both Broodsters.  Chokeslam finishes at 2:44.  *  The Brood doesn’t take it lying down, however, and Kane gets that favorite of Vince Russo, the BLOODBATH.

Meanwhile, the Rock’s really good coke is finally kicking in.

Meanwhile, Vince has an ominous phone conversation with Undertaker, with the audio guys conveniently being able to hear Taker’s side of it.  Vince has to deliver papers via Steve Austin OR ELSE.  Given what we know about how the storyline played out, this whole thing looks even more idiotic in retrospect.

Steve Austin joins us for reasons that are never made clear, but Vince interrupts him anyway to beg for help in going after Undertaker.  Austin’s counter-offer:  Kiss his ass.  Fair enough.

Meanwhile, the saga continues with Vince going to deliver the papers himself.

D-Lo attacks, but walks into a spinebuster, and Val works the arm.  D-Lo comes back with the legdrop, but Val slams him and goes up to finish.  D-Lo brings him down with a superplex for two as the crowd dozes.  Remember when this was a hot opener at Summerslam less a year previous?  Now both guys are stuck in midcard hell.  Val with the Russian legsweep, but Nicole Bass continues stalking him, leading to a distraction finish victory for D-Lo at 3:10.  ½*

HHH has super-generic badass heel music that totally does not make him sound like a badass.  Forgot about that period of his career, actually.  I heard it and wondered what they were editing out, actually, before remembering this was supposed to be his new main eventer music.  Billy runs wild before getting clipped, and Hunter works the knee.  So weird to see heel HHH in long tights.  Once he switched to the trunks it was like the missing link to make him look like a main event guy.  So HHH continues working on the knee, which gives us HOURS of Billy Gunn having to sell a knee injury.   HHH with the figure-four and he does the argument with Earl Hebner bit that didn’t get over for another year after this.  Gunn comes back with a catapult as poor JR has to call someone “Mr. Ass” with a straight face in what is supposed to be a serious wrestling contest.  They wander to the floor as Gunn forgets which knee he’s selling, but Chyna runs him into the post anyway.  This brings out Road Dogg, who is wearing a WWF CASINO t-shirt, a piece of merchandise so dated that Buzzfeed is probably doing a column about it as we speak, but HHH finishes with KICK WHAM PEDIGREE at 6:48 anyway.  So this was a thing that happened.  Poor HHH was dead in the water as a monster heel until they retooled his look, his tights, his music, his entourage, his interview style, his nickname and his personal relationships.  But aside from that, he got over 100% on his own.  *

Mankind gets caught in the Corporate corner, but Bossman isn’t getting along with Test.  They keep beating up Mick anyway, but Big Show gets the hot tag, causing Bossman to tag Test in out of cowardice.  Show clotheslines both guys and Bossman runs away, allowing Mankind to finish Test with the Mandible Sock at 4:30.  ½*  This prompts the MEGAPOWER BREAKUP between Test and Bossman, and holy shit how could I forget about this?  On the Smackdown pilot this set up the UNION OF PEOPLE YOU OUGHTA RESPECT, SHANE!  Aka UPYORS.  This was really a thing that happened.

Meanwhile, BEAVER CLEAVAGE.  This is like “Vince Russo’s Greatest Hits of Terrible Ideas”

Godfather is IC champion for those like me who completely lost track at this point.  Jarrett wants a title match, but Godfather wants Debra for his loyal army of prostitutes if he wins.  Godfather quickly puts him down and hits a legdrop for two, but Jarrett takes him down with an armbar to take over.  And now Val Venis joins us, which brings out Nicole Bass as well, and Godfather gets the distraction rollup at 1:40 to win the services of Debra.  She’s into it, but Owen Hart stops that from happening.  Let’s just move on before we follow the storyline to the conclusion and it just makes me sadder.

Meanwhile, back to the Vince Russo bullshit, with MEAT.

No match, as the Acolytes immediately beat the hell out of him, until Test saves.

JR doesn’t like Shane’s chances here.  And just like that, the Mean Street Posse runs out and gets owned by the Rock, and Rock Bottom and People’s Elbow look to finish Shane-O-Mac as HHH runs in and the beatdown is on.  Call it a Sportz Entertainment Finish at 2:00 or so.

Meanwhile, with Vince suitably distracted elsewhere, Undertaker and the Ministry prepare their MASTER PLAN for Stephanie.  Did Vince Russo see an episode of Law & Order and think he was the first person in history to come up with that plot twist?

X-Pac comes out to call out Kane, but Owen Hart & Jeff Jarrett come out and beat on him for some reason.  Kane makes the save, but X-Pac is a whiny little bitch, and Kane chokeslams him.  But he, like, feels totally bad about it afterwards.

And then without even a commercial break to prepare us, Undertaker hauls Stephanie down on a giant cross for their unholy wedding.  Sorry, SYMBOL.  Not a crucifix.  Gotta say, 1999 was a rough year for Stephanie as far as bad weddings went.  Ken Shamrock tries to make the save and gets punked out, as does Big Show, but before anything can be consummated, Steve Austin saves the day.  Stephanie gives him a relieved hug and Steve has no idea what to do with that.   This was hilariously terrible, and then keeping in mind what the storyline progression was, it made even LESS fucking sense.

For as good as the ratings were in 1999, this was truly the golden age of non-sensical Russo bullshit; intersecting storylines that made no sense, midcarders that were no longer getting over because he couldn’t keep track of them any longer, and some of the stupidest gimmick ideas this side of 1991 WCW.  I mean, Beaver Cleavage,  and Shawn Stasiak as Meat?  No wonder I was recapping Thunder at this point instead.