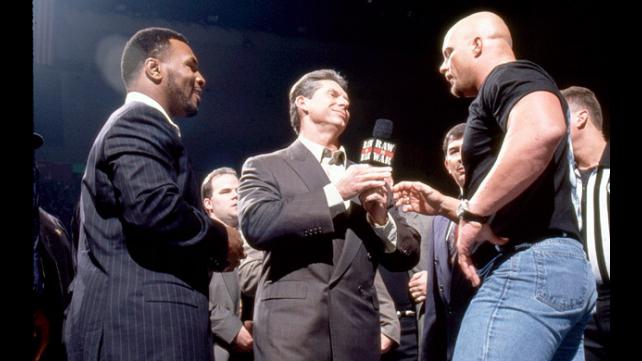 God I love the WWE Network.  I feel like I need a sabbatical from recapping RAW, much like CM Punk, so let’s go back to the Attitude Era to really show you how you build up a babyface towards Wrestlemania.  This is the night after Royal Rumble 98, with Austin having won his second Rumble in a row, and Shawn Michaels accidentally ending his career on a casket bump.  Well, for four years.

I should note I had this episode taped on its own cassette, in SP MODE mind you, for many years.

Paul Bearer joins us to start, as he and Kane did the old “turn on your undead brother who may or may not actually be your brother and burn him alive in a casket” prank that kids are all about these days.  Those kids, with their twerking and Twitter and cremation pranks.  Paul is particularly proud of putting one over on Undertaker and making little children in the front row cry, and now Undertaker is GONE forever, leaving only Kane.

Tonight:  Brought to your by the Army!  Look for the WWF hyperlink on the Army’s AOL site!  I don’t even know where to start parsing that sentence.  I understand most of those words, but they don’t make a coherent sentence together….

Meanwhile, D-X hangs out in the locker room, and Shawn Michaels is wracked with guilt for ending Undertaker’s career.  Man, knowing how much pain he was in at that point, it’s kind of a miracle he was even there.

DOA v. The Nation of Domination

I don’t see the fans chanting “This is awesome” before the lockup here.  The Nation is Faarooq, Kama and D-Lo for this match.  8-Ball hammers on D-Lo in the corner to start, and then we get the epic Chainz v. Kama showdown that ends with a big boot from Underfaker that gets two.  I feel like they missed a good opportunity to find something useful for the Harrississsesses to do later on by not having them act as Godfather’s security goons, especially given the historic ties between bikers and pimps.  D-Lo works Skull Uso over and the NOD is all kick kick punch punch before D-Lo whiffs on a moonsault and it’s “hot” tag Chainz, leading to a DONNYBROOK for the double DQ  at 4:45.  *  The Rock and Mark Henry join in for a beatdown, but Shamrock and Ahmed make the save for a big chaotic brawl.  Jim Ross is still AGHAST at Shamrock getting robbed of the IC title, and thinks we should all order the replay to share in his disgust.

Meanwhile, VIC VENOM shills the WWF magazine.  HOLY SHIT.  Who knew this was actually a thing?!  I don’t even remember seeing that!  I bet TSN cut it out from the broadcasts because Vince Russo violated Canadian standards.

This is followup from the “You’re just a jobber!” nonsense that robbed the world of the Sal Sincere gimmick.  Brandi attacks from behind and gets a sideslam for two, but misses a charge and hits the post.  Mero chokes him out while someone delivers flowers to Sable, which of course upsets Mero.  I wonder how he felt when Brock Lesnar promised to go home and bang her after beating Frank Mir.  Brandi makes the comeback with a front suplex for two and reverses a slam for two, and a rollup gets two.  Mero blocks a sunset flip, but Brandi gets two anyway.  Mero finally goes low with distraction help from Sable, and finishes with the TKO (F5, sort of) at 3:30.  Short but fun.  *1/2

Meanwhile, D-X investigates the mysterious hearse that’s parked in the back, but it’s merely filled with ringrats.  Chyna is unimpressed, but luckily she had a stable and loving relationship with HHH, which could withstand him banging hot chicks whenever he wanted.

Jack beats on Pierre outside while Jacques and his ridiculous skullet pounds on Charlie in the ring.  Funk does a funny facefirst sell of the beating and Pierre adds a piledriver for two.  They set up for a spike piledriver, but Cactus just comes in without a tag and breaks things up.  The ref puts him out, so Jack beats him up for the DQ at 3:15.  Oy vey the finishes on this show.  ½*

Meanwhile, D-X questions the midgets about the whereabouts of the Undertaker, but they don’t speak midget and get nowhere.

Bradshaw shrugs off an attack and pounds away on Jarrett in the corner, but misses an elbow.  He keeps coming with a blockbuster slam, but the Rock N Roll Express trips him up and Jarrett takes over.  Gibson gets a cheapshot, but Bradshaw continues to no-sell everything and puts Jarrett down with a big boot and powerbomb.  Sadly, Windham comes in and “accidentally” hits Bradshaw with a lariat, allowing Jarrett to retain at 3:41.  The team ends their dissent with Windham turning NWA to shock of all.  Well, all who weren’t taking a shit or getting nachos.  ½*

Meanwhile, it’s hour two already, as this show is just FLYING by.  No wonder I loved watching RAW at this point.  We switch to Jim Ross and Jerry Lawler on commentary now.

Undertaker descends from the heavens on a harness…but it’s Shawn Michaels.  OK, they still got me with that one.  So we now get a D-X cookout, complete with BBQ pit and chef hats.  They display their wieners, and HHH challenges Owen Hart to a European title match next week while Shawn slaps his salami.  THESE ARE THE GUYS RUNNING THE COMPANY NOW.  And it’s still boring!  Also, Space Mountain is old and broken down, so call him instead.  Onto Steve Austin, as Shawn points out that he’s done everything Austin has done so far, and he lays down for NOBODY.  This is exactly the sort of anarchic interview that’s sorely missed these days.

Who booked this crap? The Bangers double-team Jesus while Honky Tonk does commentary and JR does his “You two sound like cousins” winking reference.  Thrasher briefly plays face in peril against Savio before making the hot tag to Owen, who finishes a Boriqua with the Sharpshooter at 3:03.  So this was a thing that happened.  *

Rock quickly gets a suplex and People’s Elbow for two, facing the wrong camera!  He’d get cut from developmental SO FAST for that shit.  What kind of a future World champion doesn’t know where the hard camera is?  Ahmed comes back and slugs Rock to the floor as Mark Henry joins us at ringside.  Ahmed with a spinebuster, but Henry nails him with a chair and Rock Bottom finishes at 2:44.  ½*

The Outlaws are wearing overalls, in solidarity to Southern Justice.  Charming.  Oddly, The Godwinns went on to become Jeff Jarrett’s bodyguards with that very gimmick.  Not the racist aspect, thankfully, just the name.  Billy Gunn gets beat up by Henry for a bit and I guess he’s face in peril.  Keep in mind that they were terrible in their prime and now they’re even worse in their comeback attempt.  The dull beatdown continues unabated until Billy hits Phineas with a stuffed pig for the pin at 5:00.  This was a weird period for the Godwinns, as they were no longer quasi-retarded pig farmers and were now just angry rednecks.  DUD

Iron Mike Tyson joins us for some sort of big Wrestlemania announcement, but Steve Austin interrupts before Vince can finish announcing just what it is.  Austin is disgusted by Tyson glad-handing all the talent in the back, and he wants Tyson for himself.  Complete with unbleeped swearing and middle fingers from Austin!  This prompts a giant melee with Austin getting dragged off by Vince’s stooges, and Vince is SICKENED by Austin for ruining his big moment.  And that’s where we leave it off.

Man, the product is like night and day to now.  No matches over 5:00, crazy off-the-cuff promos, storyline directions for pretty much everyone.  Yeah, there was a lot of crap, but it well-disguised by keeping it short and baffling ‘em with bullshit before moving onto the next stupid idea.  No wonder this show started overtaking Nitro soon after this.

Hopefully they keep adding more 98 stuff, it’s so much more fun than the current product.