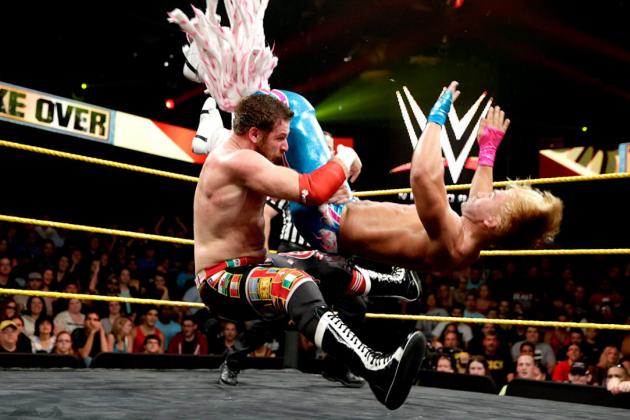 Your hosts are Tom Phillips, Byron Saxton and William Regal.

A sign in the crowd notes that “This person only attends Lemon Parties”.  Stay classy, Full Sail.  On a related note, I was discussing Lemon Party with a co-worker and it came up that he had never Googled “blue waffle” either.  Sadly we couldn’t do it on the work computers so he could add that to his bucket list.  Camacho attacks and gets a sleeper, but Rose fights out and starts to make the comeback before Camacho cuts him off and goes back to the sleeper after a big boot.  The crowd chants “Party Time / All the time” to get Rose fired up, but Camacho puts him down and drops a leg for two.  Hey, some people only want to rock n roll all night and PART of every day, to quote Paul Rudd.  Rose comes back with the corner splash and broncobuster, and the Party Foul finishes at 5:06.  Perfectly Acceptable Wrestling.  **

The Ascension charges in and attacks, but they get tossed as a result and the luchadors try a dive…only to get caught with stereo forearms.  Ouch.  Viktor beats on Kalisto in the corner as the crowd is torn as to who to chant for here.  Konor drops an elbow for two and Viktor chops him down for two as Kalisto is your cara-in-peril.  Viktor drops him in the corner for two and goes to the chinlock, then decides to just toss him and let Konor beat on him outside.  Kalisto fights them off, but Konor cuts off the ring in classic fashion and Kalisto has to fight off Viktor with a victory roll before making the hot tag to Local.  Rolling kick out of the corner and moonsault get two on Viktor, but he goes up and misses, allowing Viktor to hit the STO.  Fall of Man finishes at 6:15.  Bigger challenge, same result.  Keep the new meat coming!  The more they work longer matches, the better they’ll get.  Again, totally fine, fun wrestling.  **

Tyler Breeze gets a video package!

Sami has new music for some reason, as does Breeze.  Why are they messing with what was working?  The crowd was really into Breeze’s entrance before and this kind of kills it.  They fight over a wristlock to start and Zayn goes to the armdrags and puts him down with a leg lariat.  He goes up and Breeze shoves him to the floor and then chokes away in the corner.  Breeze with a bulldog into the corner for two.  Faceplant gets two.  Breeze holds a facelock on the mat, but Zayn powers out and chases him to the floor, then follows with a quebrada that looked like it smashed Breeze’s head into the ramp.  YIKES.  Back in with a flying bodypress for two.  Breeze elbows out of the Blue Thunder bomb, but a second try hits for two.  Zayn back up, but he misses and Breeze superkicks him into a DDT for two.  Powerbomb out of the corner gets two.  Breeze slugs away in the corner, but Zayn suplexes him into the turnbuckles.  They’re letting it all hang out here, for sure.  Breeze with a rollup for two and they fight for another one, but Zayn walks into a superkick that gets two.  They keep slugging it out on the ropes and now Zayn is PISSED.  They fight over a wacky suplex variation, and Zayn is like “fuck it” and turns it into a crazy powerbomb for two.  I don’t know what that was, but it was AWESOME.  Breeze takes a break, so Zayn follows him out with another dive that smacks poor Tyler’s head into the metal AGAIN.  I hope it’s worth the concussion.  Back in, Sami crotches himself trying the corner kick, and the Beauty Shot finishes at 15:55!  Tyler Breeze is the #1 contender!  I presume this means Zayn is headed to the big time, because otherwise there was no point in having him blow the big one yet again.  There was a point where Breeze was clearly off on another planet after the head injury, but this was easily a show-stealing classic otherwise.  ****

Rusev is again talking about Putin, and that’s a no-go for Mojo!  Rusev kicks his ass, regardless of patriotic fervor, though.  They need to bring back Bill Watts and have Rusev bury him under the Russian flag again.

So we’ve got Flair in one corner and Bret in the other, and I’ll leave it as an exercise to the reader to guess which is which.  They trade armbars to start and Nat works on a headlock while the crowd is torn.  Charlotte cartwheels out and goes to her own armbar, but Nattie goes for the leg now and taunts Flair.  That never works out well for people.  Charlotte tries a wheelbarrow suplex and Nat reverses into a rollup for two, and goes right into a bodyscissors for two.  Rollup gets two.  Charlotte finally uses the POWER OF THE CHOP to take over, and Ric does some strutting to celebrate.  Nattie tries a sleeper, but Charlotte sits down with a jawbreaker for two.  Charlotte wraps her up with a figure-four headlock and bounces her face off the mat a few times, then flips her over for two.  Regardless of her experience as a wrestler, Charlotte is a freakish athlete.  They trade abdominal stretches and Charlotte dropkicks her for two, but Natalya comes back with a butterfly suplex and the low dropkick for two.  Charlotte with a Flair Flip and Nat knocks her off the apron, so Charlotte yanks her to the floor in response.  Back in, that gets two.  Charlotte goes AERIAL, but misses the moonsault and Flair is going nuts at ringside.  Nat with the STO for two.  Sharpshooter, but Charlotte counters out to the figure-four in a slick move, and they fight for the reversal on that.  That turns into a SLAP FIGHT before Nat makes the ropes, but Charlotte rolls to the floor and hangs on before finally breaking the hold.  Charlotte sends her knee into the stairs, and back in for her own Sharpshooter, but Nat then reverses THAT before Charlotte fights her off and finishes with the neckbreaker at 16:41 to win the NXT title.  Everyone hugs it out afterwards because Flair is so damn proud of his daughter.  And well he should be, the match was awesome.  ***3/4

Some pretty badass gear on Kidd tonight.  Kidd takes him down with a headlock and gives him a shot to the head to show he’s meaning business, and controls with a wristlock on the mat.  Neville goes to the armbar, but Kidd makes the ropes and monkey-flips him, only to have Neville land on his feet.  They reach a stalemate and now it’s on.  Kidd throws the first forearm and hangs Neville in the Tree of Woe for some punishment.  Back elbow gets two.  Kidd cranks on a chinlock and Neville fights up, so Kidd dumps him and follows with a flip dive that gets two.  Back to the chinlock, but Neville fights up again and puts him down with forearms and puts Kidd in his own Tree of Woe.  Regal sings the praises of sweet revenge and Neville springboards in with a forearm for two.  Kidd bails to the apron and catches Neville with a forearm to block his dive, and that gets two.  Kidd to the top, but Neville catches him with a forearm and flips away from a potential powerbomb.  And then he does his own for two!  Neville tries a springboard move, but Kidd follows him up and brings him down with a Russian legsweep for two.  Kidd to the top again, but he lands on Neville’s foot and gets cradled for two.  Kidd throws kicks and tries a suplex, but Neville reverses and they both suplex each other to the floor in a crazy bump.  Both guys JUST beat the count.  They slug it out while the crowd does a dueling chant, and Kidd takes him down with a Sharpshooter, which Neville blocks, so Tyson turns into the rare Dungeon Lock instead.  Kind of a triangle choke.  Neville makes the ropes, but Kidd goes up with a somersault legdrop for two.  Kidd to the top again and Neville keeps trying to follow, so Kidd keeps fighting him off, but finally Neville flies in with a rana from the top and finishes with the Red Arrow at 20:53.  Rough night for the Kidds, but that’s what they were there for.  ***1/2  Neville wants the handshake, but Kidd gives him the COLD SHOULDER.  Oh no he didn’t!

Payback is gonna have a bitch of a time topping this show.  There’s your $10 worth for the Network in 2 hours.  No bullshit, great action, and easy to follow storylines with logical payoffs.  Thumbs WAY up.