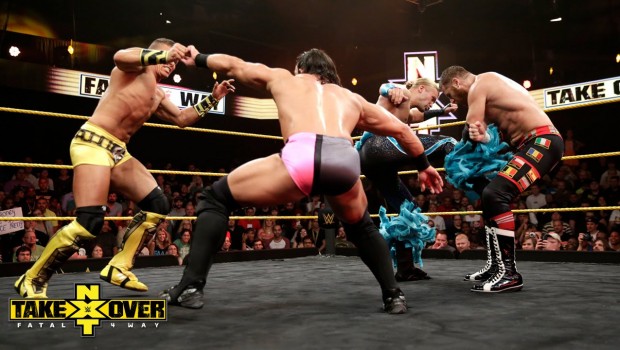 In a cool touch, the NXT guys have been remixed into the “Now / Forever” opening, and KENTA is part of the opening now!

This is probably it for the champs because clearly they’re going to demolish the Usos on the big stage before the year is out. Viktor pounds on Sin Cara to start, but he fires back with a springboard moonsault for two before getting tossed into the railing. Konnor pounds on the back and gets two and they work Cara over in the corner. Viktor tries a slingshot powerbomb, but Sin Cara escapes that with a rana and the Ascension gets rid of Kalisto to cut off a tag. He fights off Konnor and makes the hot tag, however, and Kalisto runs wild with a sunset powerbomb on Viktor for two. Konnor bails and Sin Cara hits him with a dive, then he regroups and hits both guys with another dive. Back in, Viktor hits Kalisto with a lariat to cut him off and they set up for the Fall of Man, but Konnor gets tripped up and Kalisto finishes Viktor with his neckbreaker deal at 7:45 to win the tag titles. Mostly a nothing match, but the finishing sequence was super hot. *** Really, they were long overdue to get those belts off the Ascension. My wife was actually very impressed with Kalisto’s acrobatics, although she was very confused because I’ve been binging on horrible 95 RAWs for the past month and she was like “How come I haven’t heard of any of these guys before?”

Adrian Neville clarifies the difference between confidence and cockiness.

Corbin seems to have begun his Sons of Anarchy-inspired repackage, as they call this his “NXT debut” despite months of doing jobs. And in fact he destroys Parker and finishes quickly with a downward spiral at 0:30. He’s apparently getting one of the newbie Divas as his biker babe as part of the gimmick, and if so they could have something with this guy.

Tyson Kidd does a funny promo, carrying on with his spectacular douchebag act. Basically he puts over the other guys in the match, then reveals that he was talking about himself the whole time.

A pre-match vignette gets over that most faithful of wacky wrestling concepts: DEADLY HAIR CREAM. Frankly I’m shocked it’s taken this long for it to make a comeback after the heyday in the 80s. Enzo’s options for Lefort are limited to ZERO OPTIONS and someone’s head is going in that bucket of cream tonight. Enzo’s manic energy has been sorely lacking from Cassady’s act these past months and I’m so happy to have him back. Frankly it should have been them to end the Ascension’s reign. They head off a headlock while Renee discusses the subject of hair loss and how it has personally affected her in the past. Enzo with a dropkick to send Lefort running, but he catches Enzo with a necksnap to take over. We hit the chinlock and Lefort knees him in the corner and slugs him down while the hair debate rages at the commentary table. Renee does not care for the abuse that Enzo puts his scalp through! Lefort with a clothesline for two, but Cass takes out Marcus Louis and Enzo rolls up Lefort for the pin at 5:45. It’s for the better, he looked too much like 1999 Randy Savage anyway. * But then, since life is unfair, Louis attacks and allows Lefort to run away, sacrificing his own hair as a result. Well, he got a big bucket of hair cream dumped on him, but no one actually got shaved, so they kind of pussied out on the only stipulation…TWICE! So kind of a major fail all around.

William Regal joins us to formally introduce KENTA and the crowd is immediately going nuts for him. He changes his name to Hideo Itami, because apparently the NXT Random Name Generator works in Japanese as well, but Ascension hits the ring and tosses him because they’re in a bad mood. This proves to be a bad idea as Itami kicks their asses single-handedly and sends them running. So that was pretty bad-ass, but what the hell was wrong with “KENTA” as a name?!

Bull steamrolls in and runs Mojo over in dominating fashion, then goes up with a diving headbutt to finish at 1:11. I don’t see anything in Bull, especially with Kevin Steen coming in and doing the same gig right away, but Mojo hit the wall a long time ago and this might be the end of the line for him. DUD The problem with Bull is that he looks like a long lost Godwinn brother at best, and a 1995 RAW job guy at worst.

Meanwhile, Enzo and Cass go searching for the Legionnaires, because they wanna see someone bald. So they kidnap Louis and reveal his baldness, complete with shaved eyebrows. “He looks like a Chia pet!” declares Renee. Well, they’re trying.

Speaking of trying, their next social media project that they probably won’t shut up about is buying articles on Buzzfeed, sandwiched between quizzes about which One Direction member your cat is most like and animated gifs of ostriches who are SO OVER the new Taylor Swift song. Although really those ostriches are crazy, that song is catchy as hell.

Bayley attacks to start, but Charlotte fights her off with chops, so Bayley gets a low dropkick for two. Backslide is blocked with a neckbreaker and drops knees for two. Figure-four headlock and Charlotte beats on her in the corner with more chops. Back to the figure-four and she rides Bayley around the ring with her freakish leg strength, but Bayley reverses into an inside cradle for two. Rollup gets two, but Charlotte cuts her off again with a clothesline for two. Bayley finally snaps and fires away with forearms, but Charlotte takes her down in the corner for two. Bayley fights back again with a top rope rana, but only gets two. Charlotte rolls her up for two and then rams her head into the turnbuckles in a ugly spot, and the moonsault gets two. Charlotte way overshot on that one, too. Neckbreaker finishes at 10:50. Really, really disappointing, although it had super heat until the finish completely deflated the crowd. Way too long for what it was, though, as Charlotte really got exposed without someone like Nattie to carry the pace. It really needed more hope spots for Bayley, who never seemed to be seriously threatening. ** Sasha Banks comes out for the beatdown on Bayley afterwards, prompting an argument from the crowd about whether she’s ratchet or not (half feels that she is, the other half feels the opposite) but Charlotte kinda makes the save.

Big brawl to start and the heels get dumped, and Zayn USES TYLER’S PHONE. That’s just wrong. Tyson goes after Zayn and gets caught in a Koji Klutch as a result, but Breeze breaks it up and they all go brawing up the ramp again. Neville takes a double suplex from the heels out there, and back into the ring as they beat on Zayn as well. The crowd notes “Nattie’s Better”, but I’d have to take issue with that. Kidd’s a hell of a worker. FACT. Finally the alliance breaks down and Kidd turns on Breeze and dumps him, hitting a neckbreaker on Zayn for two. Poor Neville gets tossed AGAIN, a total non-factor in the match thus far. Kidd chokes out Zayn while the other two disappear into the ether, and a corner dropkick gets two. To the chinlock as Breeze must be legally dead or something, and Neville finally gets in and goes after Kidd. Sami puts everyone on the floor and Neville steals his dive mojo, and now finally we get the Zayn v. Neville showdown everyone has wanted all along. Zayn blocks a handspring with a backdrop for two, but Kidd dumps Zayn and goes after Neville again. Poor Adrian hits the floor for the zillionth time and Kidd suplexes Zayn for two. Sharpshooter is escaped by Zayn and he makes the comeback, but walks into the Beauty Shot. Breeze hits finishers on EVERYONE and gets a series of near-falls, but no luck. Well there was his one sequence of hope spots. Everyone piles up on the top rope, giving us the Tower of Doom spot and Zayn gets two. The ref should have counted three, actually, and the crowd totally calls him on it. Zayn unloads on Kidd in the corner, but walks into Neville’s boot, and the shooting star press allows Breeze to steal a two count on Zayn. This crowd is insanely ready for Breeze to win on a fluke but I don’t see it happening. So Breeze takes another shot at Zayn, but Kidd catches him with the Sharpshooter instead, and Neville saves just as Breeze is going to tap. So Neville slugs it out with Zayn and Neville hits the floor yet again, allowing Zayn to hit him with a dive into the front row. Tornado DDT for Breeze on the floor, and Huluva Kick for Kidd…gets two. Neville pulls out the ref and instantly turns heel. THEY HAD ME. Neville lays out Zayn, and the Red Arrow finishes Kidd at 24:11 to retain. **** The first 10 minutes or so was kind of aimless, but once they hit the crazy spots it took off big time. Man, they really ripped out the heart of the crowd with that finish, though. Zayn finally winning would have been the epic moment they were shooting for with him, and I don’t know if they can get back there again.

Certainly not on the level of the first two specials, but the main event was certainly worth going out of your way to see and the rest was inoffensive and fun. Thumbs up.