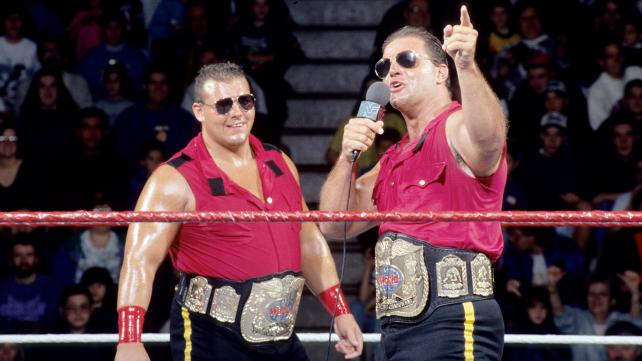 Live from Poughkeepsie, NY, one day after Wrestlemania X.

The Quebecers v. The Bushwackers

I didn’t even realize they were still around at this point. The Quebecers were of course the tag champions but this was specifically non-title. Big brawl to start and the Quebecers bail, and back in for some “comedy” spots. Johnny Polo gets involved and gets nailed by Jacques by mistake and Luke gets two. This is just HORRIBLE. Finally they get it together and Jacques gets double-teamed in the Kiwi corner with some super-basic stuff. Pierre also gets dominated and we take a break. Back with Luke playing ugmo-in-peril, as Jacques slams Pierre onto him for two. Man, Pierre Ouelette looks like a high school senior here compared to how grizzled he got even in 95. More dull double-teaming as Luke is just totally unable to work any kind of normal pace, but he makes the hot tag to Butch. Battering Ram for Jacques puts him on the floor, but Polo nails Butch behind the ref’s back and Pierre finishes with a running knee to the back at 13:22. What a trainwreck. It was like they were trying to work a normal tag match, but the Bushwackers are so awful that it ended up 10 times worse than their usual goofy comedy match would have been. DUD Afterwards, Captain Lou returns and challenges them to a tag title match against a team of his choosing. This would end up badly for the champions.

Next Monday, watch the special encore of Wrestlemania! You mean we can’t just watch it on the Network the day after?

Meanwhile, IRS presents his list of reasons why people are tax cheats.

Hey, that jobber ended up in ECW a few years after this, didn’t he? “Hard Cash” Hammrick or something like that? He was pretty decent there, too. Tatanka with a backdrop and chops, and Hammrick charges and takes a bad bump to the floor. No wonder he ended up in ECW. Back in the ring, Tatanka with a delayed suplex and he works the arm, going really stiff on the poor guy for some reason. Tatanka with a pair of chops and the PAPOOSE TO GO to finish at 4:41. This was pretty lengthy for a squash.

Diesel is starting to get some steam behind him with the fans, who chant his name while he beats on the jobber. Usual Nash squash, Snake Eyes, big boot, powerbomb at 2:25. Now that was a squash.

Bret Hart is out with his new belt to issue a challenge to all comers, including his brother.

Hall of Famer Koko B. Ware, don’t forget. And Randy Savage still isn’t. Vince is AGHAST at people disparaging the reputation of Burt Reynolds in the tabloids, which is kind of hilarious given they just showed a clip of Burt at Wrestlemania so drunk off his ass that he’d probably explode near an open flame. Speaking of explosions, the combined ugliness of JJ’s outfit and Koko’s outfit threaten to shatter the phosphors in my TV. Thank god Savage isn’t on screen right now or I’d void my warranty. Koko briefly controls but misses a charge and Jarrett chokes him out. Closeups show Koko looking ROUGH at this point. Drugs are bad, Koko. Jarrett controls with a clothesline out of the corner, but misses a flying fistdrop and Koko makes the comeback. Vince declares that this is “Bowling for Dollars on Monday Night RAW”. I’m gonna let that one slide this time but I’m not tolerating any references stupider than that. Jarrett finishes anyway with a DDT at 5:05. ** Jarrett gets in Savage’s face and Randy is pumping his fists at him like a cartoon superhero, and that would actually be an interesting match if it happens in the next couple of weeks. And then they brawl in the ring, giving us all three neon outfits at the same time…and that’s it for my TV. My poor cat nearly gets mauled by flying shrapnel from the screen shattering due to stress. RIP.

Next week: 1-2-3 Kid, Owen Hart, and Lex Luger v. Rick Martel in the battle of narcissists! 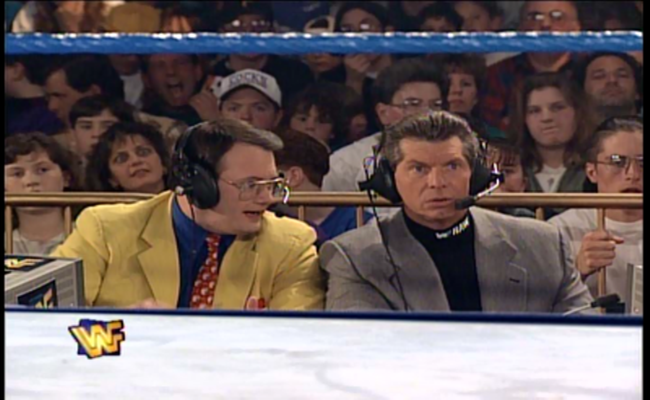 Your hosts are Vince McMahon & JIM CORNETTE. This could be awesome.

Earlier tonight, Ted Dibiase buys up ringside seats from fans. Given the state of the business at that point, he could have done that from his pocket change.

Martel tries for the face punch to start but gets chased off and hiptossed out of the corner. Luger throws clotheslines like a developmental babyface making a comeback in NXT, and he goes to a headlock to retain control. Vince specifically notes that Luger is a “house of fire”, so there you go, grammar Nazis. It’s not “house afire”. Martel bails to the apron and Luger yanks him back in for that headlock again, and an atomic drop to put Martel on the floor as we take a break. Back with FISTICUFFS on the outside, and Luger walks right into a choke back in the ring. Clothesline out of the corner gets two. The crowd chants “USA” but at least Martel is from Quebec so it’s valid. Martel cuts off a comeback with a knee to the gut and goes back to the choking and chinlocking. Luger with a backslide for two. Suplex and Luger makes the comeback, as Martel makes the mistake of pointing to his head to indicate his intelligence. It’s like the wrestling heel version of monologing! Powerslam and Torture Rack finish at 15:47. This was Perfectly Acceptable Wrestling. **3/4

We get a weird POV shot from Dibiase’s seat, as he cuts a promo that is clearly redubbed in post afterwards. This would be the start of the Corporation, of course. This dude with the pasty skin, mullet and ugly tights might be the jobbiest jobber who ever jobbed. Owen tosses the dude around while Jim and Vince do their “what’s in the news this week” segment. Owen with a back elbow and he cuts off the jobber’s pathetic comeback attempt and puts him down with a bulldog and Sharpshooter to finish at 5:10. Most of this was stalling while Dibiase and Vince did their bit at ringside.

Doink controls the guy with an armbar, giving us some midget-related comedy off that, and he pounds him down and finishes with the Whoopie Cushion at 3:30.

The Quebecers are out to answer Captain Lou’s challenge, and his team is revealed as the Headshrinkers in a bizarre babyface turn for them.

Oh wow, X-Pac v. Gangrel four years early. Given his look and connections I’m really not sure why Dave Heath didn’t get a contract much sooner. Kid controls with a hammerlock, but Mr. Phantom overpowers him until Kid comes back with a spinkick. Dropkick misses, but a second spinkick gets two. Moonsault press finishes at 2:24.

I failed to note the WWF Greetings on Call commercial on last week’s show, and I feel like I let everyone down, because who wouldn’t want to get a personal greeting from a drunk Razor Ramon at 3AM?

Crush pummels the jobber with elbows and a superkick and pounds away on the mat. Press slam and a kneedrop finish at 3:25.

Nothing to see here this week.

Next week: Earthquake v. Adam Bomb and the Wrestlemania X 10-man that got bumped from the PPV!