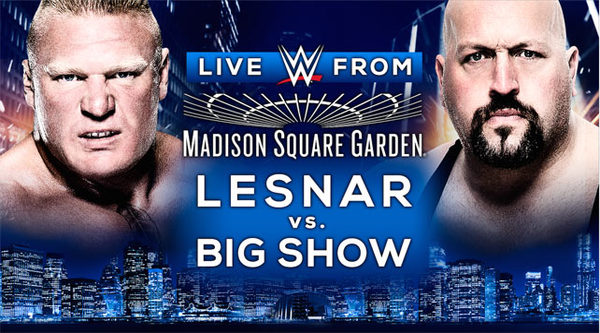 No idea why this got changed from the singles matches, unless it was just for time reasons. I like the scaled-back Titantron and LED wall, it gives things a bit of freshness. The pink ropes, however, can fuck off. My wife, having never seen Sheamus’s new look, is very offended by it. “Does he know how stupid he looks?” Orton pounds on Sheamus in the corner to start, but Rusev comes in and gets his own shots. Over to Ziggler, and he quickly walks into Rusev’s spinning slam like a goof and the heels take over. Rusev pounds him down for two and catapults him into the corner, and we get a dull heat segment on Dolph. Finally he escapes a bodyslam and gets his own, and it’s hot tag Orton. Draping DDT on Sheamus and they get rid of Rusev, but this allows Sheamus to come back. Brogue Kick misses and the RKO Outta Somewhere finishes at 8:35. This was simple and safe and fine. **1/2 Afterwards, Rusev berates the stupid Sheamus, who is more useless than Lana! This results in a Brogue Kick. Rusev continues to go nowhere.

Previously, Kane gets a job evaluation, and this leads to Seth Rollins laying him out with a chair and injuring his leg. Backstage, Kane is still quite jovial on crutches and unaware of who this mysterious demon might be.

We get some wacky dancing to start and Stardust takes over with a clothesline and hits the chinlock. He tries to go to work on the leg and misses a bodyblock, and Neville makes the comeback. The announcers all sound like they’re half-asleep and watching Netflix on their iPad or something. Neville tosses him and follows with a quebrada, but Stardust slams him for two. Stardust decides to pose with Neville’s cape for some reason and goes up, but lands on Neville’s fist. Red Arrow finishes at 7:23. Another nothing match. *1/2

Meanwhile, Paul Heyman (with both an iPhone and an Android phone in hand) declares Brock to be the mayor of Suplex City tonight.

Didn’t the babyface team already break up twice this week? PCB works Alicia over in the corner to start and wouldn’t you know, now it’s BUFFERING TIME again. In fact, the XBone app crashes and I have to switch over to the Roku instead. I think this is an Xbox thing, though. Becky suplexes Alicia, but gets outsmarted by the Bellas while we get the world’s stupidest Twitter scroll at the bottom. Brie goes to a hold, but then informs us that Brie Mode is imminent and hits a running knee for two. I’d normally expect that changing to an entirely different MODE would at least give more than a near-fall. Hot tag Charlotte and she spears Nikki into a figure-four, but Paige tags herself in and the faces bitch at each other, allowing Brie to clothesline Paige for two. And now we get another boring heat segment instead of just ending the match where they should have. We get a series of chinlocks and Paige fights out, but now Charlotte and Becky short-arm her and the Rack Attack finishes at 8:50. Well that shows her. Apparently everyone in the Divas Revolution is bitchy and vindictive. *1/2

Both Lance Storm and Don Callis are at ringside on Jericho’s behalf, so hopefully Owens beats them all up. Jericho dumps him and follows with the springboard dropkick, but Owens catches him with a cheapshot on the way in for two. Senton gets two. Jericho comes back with a double axehandle while the announcers have an inane conversation about Jericho’s WWF debut (JBL: “Sure, he came in all cocky and struggled a bit, but all of a sudden he beat both Stone Cold and the Rock in the same night and became undisputed champion!”). Owens tries the Pop-Up powerbomb, but settles for the package powerbomb instead. The crowd declares the match to be awesome. Just…no. Jericho tries the Lionsault, but his knees and Owens cannonballs him, then misses the swanton. Walls of Jericho follows, but Owens makes the ropes and rolls him up for two. Codebreaker, but it only gets two. Owens comes back with a superkick, but Jericho reverses the powerbomb into a rana and the Walls, which Owens counters into a small package to retain at 8:08. Decent and to the point, and it definitely had the most crowd heat so far. **3/4

The New Day is hilarious as usual in the pre-match promo, deriding the Dudleyz’ 90s references and lack of lenses in their glasses! Yeah, what’s up with THAT? D-Von overpowers Kofi to start and the Dudz double-team Big E. He comes back with a splash attempt, but stops to dance to the trombone and the Dudleyz try the Wazzup, only to have Xavier save. Bubba gets stomped in the heel corner while Xavier monologues and trombones. He is indeed introverted, just like their opening promo said. Big E with the chinlock. For those with Wall Street connections, you might want to invest in Tricep Meat, because Xavier informs us that stock is rising in that particular field. Over to D-Von, and they hit 3D on Kofi, but Xavier saves for the DQ at 6:40. If they were gonna do it, it should have been here. *1/2 This was just the exact same match as Night of Champions, but an even bigger waste of time.

Just to clarify, is Big Show supposed to be a heel or a babyface at this point? JBL is in hyperbole overdrive here, declaring this “the most titanic struggle in the history of MSG”. Like, COME ON. Show dumps Brock and pounds him in the corner, then hits three chokeslams and gets two. Luckily, Brock is able to duck the real finisher, the punch, and takes Show to Suplex City. An F5 attempt goes badly, so we get another sloppy german instead. Another F5 finishes at 4:05. This was a pretty easy payday for Brock, and it was pretty much what you’d expect, with Brock throwing Show around for a couple of minutes and finishing in a hurry. *1/2 Brock beats him up again with another F5 and the ring announcer is like “Let’s hear it for the Big Show!” and everyone boos. That’s great. Meanwhile the horridly robotic announcers are trying to sell this as a clash of epic proportions and are talking about what a force of nature that Brock is, in the same tone of voice that you’d discuss a mildly interesting story on the local news. It takes a lot to make me say “Perhaps Michael Cole should have taken lead on this show” but here we are.

This week: NXT Takeover. Sadly I’m out of town at a training conference all week, so it’ll be a few days until I can get to it.

And how messed up is it that World champion is challenging for the secondary title? Cena grabs a headlock, but Seth runs him into the cage to take over. JBL notes that lots of people dislike Cena, much like people dislike the Yankees because of success, so if you don’t like either of them, then beat them. That doesn’t even make sense. They fight to the top and Cena bulldogs him for two. Back to the top and this time Rollins gets a flying knee for two, but Cena tries to crawl out the door before Rollins cuts him off. Rollins gives some cheese grater treatment on the cage, but Cena puts him down with an electric chair for two. To the top again and Cena tries the guillotine legdrop, but Rollins reverses into a powerbomb for two. They ram each other into the cage and Cena makes the comeback while the announcers try to get “Big Match John” over as a thing. Rollins with an enzuigiri to cut him off, and that gets two. Now, that was set up by Rollins crawling for the door and Cena pulling him back into the enzuigiri, so why didn’t Rollins just walk out the door instead of going across the ring and making a cover? Anyway, Cena comes back again and hooks the STF, but Seth crawls to the door to break and they fight for the escape. Rollins finally slams the door on his head to break it up, and that gets two. Now where was World Class historian JBL to point out how that was reminiscent of Kerry Von Erich and Ric Flair? Cena catapults Rollins into the corner, but he jumps up and tries to climb out and they fight up top again. Rollins brings him down with the superplex combo for two. Rollins climbs out and now they fight on top of the cage and Cena comes down with a tornado DDT for two. Seth bounces to the top and climbs down, but Cena pulls him in through the door, only to have Seth escape the FU and hit a superkick for two. Cena with another STF, but Rollins reverses to a crossface, which Cena turns into the FU. So Seth goes low to escape that and climbs again with things looking bleak for Cena, but of course it’s the DEMON KANE run-in, as Seth is so transfixed by his entrance that he’s unable to climb down in the minute or so that it takes Kane to come out. So instead he dives at Cena, misses, and the FU finishes at 22:49. Shitty finish to a pretty good cage match. ***3/4

Really, just a standard house show broadcast on the Network. It was fine and somewhat entertaining, but pretty much meaningless and nothing you’ll regret skipping unless you were at the show and want it recorded for posterity. Thumbs in the middle.