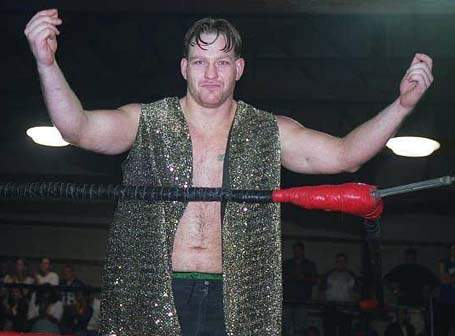 A common opening match holdover from the V-Day show with this having the added wrinkle of Wolf as referee. We have another small crowd in the House of Hardcore for this show. Morton stomps away on Palmer at the bell and immediately gets into a shoving match with Wolf. Wolf keeps catching Morton when he goes to throw a closed fist. Of course, he lets Palmer throw closed fists at will and does a ridiculously fast count onto Morton. Morton bails to the outside and is pissed off at this egregious officiating. After regrouping, Morton is able to take over. Wolf fails to do a proper count when Morton goes for the cover. This is a tough spot for me to rank as a match. On one hand, Morton is an infinite prick and had this coming to him. On the other, this is certainly unfair and Morton isn’t the type of person you should be trying to create any sympathy for. Morton is working over Palmer and doing his usual great schtick of berating the crowd. Another slow count by wolf and this match is overstaying its welcome based on the storyline that is clearly going to be presented. You have to love the announcer giving out the time cues from the front row surrounded by empty chairs. Palmer starts mounting his comeback and has a nice back elbow that he delivers to Morton. Todd brings out his trusty chain but Wolf has a chain of his own. He blasts Morton with it and Palmer picks up the win. RICKY MORTON! Is out to restore order to this haywire promotion and him and his cousin Todd lay out Wolf and Palmer until Suicide Kid chases them away. The finish was cute and would have been much more effective if Wolf had officiated the match down the middle to that point.

I always relish seeing a Ricky Morton match and this has the added bonus of him working heel. Morton backs Kid into the corner and knees him right into the balls. He then manipulates Kid’s hand. He crotches Kid over the ropes and rakes his boot across his face. Heel Ricky is a prick in this match. Outside, Morton takes a posting and Kid starts firing back with some good punches. Morton stunts the offense of Kid with another punch to the nuts. Morton continues to work over the arm until Kid mounts another hope spot. Guess how Morton stops this? That’s right, an inverted atomic drop. Kid finally gets some things going and hits a split legged moonsault for a nearfall. He delivers the sliced bread #2 when Tracy Smothers and Todd Morton hit the ring. Todd blasts Kid with a press slam driver and Morton covers him to pick up the victory. This was a good sub-five minute match and there is the novelty factor of seeing Ricky in an IWA ring.

Chuck E. Smooth talks some smack to the crowd which brings out Spike Dudley. Spike gives his glasses to a kid at ringside in a fun spot. Spike has some good jabs at Chuck. It appears that Chuck is about to be demolished when 411 runs out and gives Spike a chokeslam. Chuck again leaves in his arms.

Always the opportunist, Tracy immediately comes out and is ready for battle. He cuts the music and flicks off the crowd. Donna and Todd Morton have quite the verbal debate on the outside as Tracy stomps away and jigs inside the ring. This is tremendous. We learn this is Spike’s IWA debut. Spike is able to weather the storm and get some fun shine offense on Morton and Smothers with a big dive to the outside. Todd gets hip tossed into a row of chairs and Spike gives Tracy a flying forearm with Tracy flying through trash and stairs. Tracy regains control but loses it again when he hits Morton with a punch inadvertently. Spike throws a chair at Tracy’s face and hits a bulldog for a nearfall. Morton is such an ass on the outside just interfering at liberty and hitting Spike with hard chops. Spike gets flung into a row of chairs. We next get some spots revolving around soda drinks getting swung into the competitor’s faces. Back inside the ring, Spike gets a pinfall but a distraction from Morton on the outside negates that. The low blow has been a popular tide turner for the heels on this card. Tracy slows thing down working on a chinlock with the crowd rallying around Spike as much as a 50 person crowd can. Spike reverses into a sleeper but Tracy hits a nice back suplex and now keeps going for pinfalls. Spike mounts his comeback and has some nut shots for Tracy in a nice spot. He hits his acid drop but is unable to get the pinfall. Mean Mitch Page enters and powerbombs the shit out of Spike and places Tracy on top for the win. This was a good enough match but I would be lying if I didn’t say I wasn’t disappointed given the competitors involved. **1/2

B J Whitmer vs. Cash Flo

Ian still has some words for B J and sends out Flo in his honor. They start off with some basic wrestling and then Flo cuts a brief promo. Flo takes over and the action spills outside. Whitmer takes out a row of chairs and Flo sends him into the wall that is covered with the world’s largest trash bag. Whitmer takes a nasty bump into the ring post and Flo pastes him with some of his chops. This seemed to be worked in a manner of B J being taught a lesson at the hands of Flo. B J gets a glimmer of offense in with a suplex. He then locks on a chinlock with himself sitting in a chair. Flo fights up and atomic drops Whitmer with the chair hitting his ding ding. Flo goes for his oh shit legdrop but B J catches him up top and hits a superplex. Whitmer misses a headbutt from the top and Flo puts him away quickly with a spinebuster and the legdrop. Paul E. Smooth and 411 run out and lay a beating to Flo. They shrug Whitmer away and continue putting the boots to Flo. 411 has some truly awful punches here. Flo hulks up and press slams Smooth into 411. We then get the monster spot of Flo hitting three clotheslines on 411 to no effect. A low blow proves to be much more effective. 411 cuts his losses and escapes with Smooth on his shoulders. I may sound like a broken record but the match again was fine, but unspectacular.

Here we go with the big battle. Hard tries to gain the fluke victory with a series of roll ups. Blaze bails to the floor and cuts a promo of his own. This is increasingly becoming one of my least favorite IWA-MS tropes. Blaze acts like he is walking out but Hard drags him back and we get a chop battle on the floor.  Blaze dominates inside and hits a bulldog and back suplex for a pair of nearfalls. Hard goes flying through a row of chairs. Rollin’ is able to build up a chant for himself while he is in a chinlock. Blaze picks Hard up on a ring count after a leg lariat. Hard catches him when he tries it again and gets a nearfall. Blaze hits a trusty lowblow and then we get some straight bullshit. Blaze blinds Rollin’, pushed Brent Blades into Rollin’ who gives him a friemans carry slam, and then counts the pinfall. He then rolls Rollin’ up in the confusion and retains the title. This was garbage.

We come to our main event already as this card has been at a frantic pace. Action spills outside almost at the bell and we get a collection of weapon shots and other plunder. A highlight includes Page cannonballing through some chairs and Tony hitting him with a brutal looking stick shot. Some light tubes and a staple gun are introduced. Page picks up a hubcap as he gets a pack of chips stapled to this head. Tony does our next disgusting spot missing a cross body and hitting the wall of the building really hard.  Back inside it looks like Mitch has the match at hand until Tony distracts the referee. This allows Spike Dudley to gain a measure of revenge as he hits the Acid Drop on Mitch and Tony picks up the victory. This was a decent deathmatch.

I had some aspirations for this show with Tracy, Ricky Morton and Spike, but it was really rushed and overall everyone seemed to be on autopilot. I would avoid this one unless you want to watch all IWA-MS shows in history.