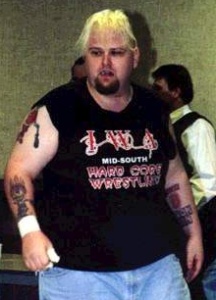 As chronicled on many podcast and articles on this site, the early 2000’s were an age of discovery for my wrestling fandom. Prompting this revitalization in me becoming a lifetime wrestling fan were Japanese wrestling and the blooming independent scene across the United States. I, like a lot of other individuals in my corner of the web, started this journey by purchasing a Weside Eastcoast Connection compilation tape. This was an 8 hour VHS extended play extravaganza that exposed me to the SAT, AJ Styles, Red, Briscoe Brothers, Low-Ki and the American Dragon. It was breathtaking and exhilarating to watch. This Eastside feel mainly of CZW, JAPW, ECWA and some NWA Wildside matches kept me occupied for hours. However, in the late fall of 2002, I purchased a Phil Schneider compilation that had a peculiar match on it. Tarek the Great vs. Ian Rotten. I vaguely remembered Ian from going back through ECW footage in the past couple of years. I had no idea what to expect from someone named Tarek the Great but suffice to say, the individual didn’t and still doesn’t match the persona.

I was skeptical seeing these guys come out in front of what looked like 30 fans. Instead, I witnessed 18 minutes of gritty wrestling with some sick headbutts and strikes thrown in. This was unlike almost anything else on the independent scene. Sure, there was stiffness and plenty of insane spots throughout independent wrestling at the time but this match had a stripped down and dare I say Southern tinge to it that hit my soul as a wrestling fan. I seeked out more and came away impressed with a new breed of talent like CM Punk, Colt Cabana and Chris Hero who were starting to sprinkle their way into more mainstream avenues like Ring of Honor. Over the next few years, I consumed a TON of IWA and mixed and matched shows to fit on the custom 6 or 8 hour tape I was building.

Unfortunately, those tapes found a dumpster numerous years ago from my parents moving and me going through various moves as I was going through college. Another casualty of college was the fact that a Mid-West promotion that at many points would consider 100 paying fans a good attendance wasn’t exactly the vogue thing to watch in college. Mounting that with various threats from Ian Rotten, the promoter, of financial hardships and scandals and I finally pulled the plug on IWA-MS around the Ted Petty Invitational Tournament in 2005.

Now I have come to an annex in my fandom where I feel there has been enough time passed that I can accurately go back and gauge this product. I feel like IWA-MS was respected in some circles but also dismissed in others as being a hardcore promotion or ran by an ultimate carny in Rotten. IWA-MS is without a doubt trashy. Throughout this watch you will see someone nearly bleed to death with a grandfather clock, a bubble bath match featuring two strippers, and Tracy Smothers maybe legitimately going after a perhaps pregnant woman in the crowd. It is possible that a rewatch of this footage may make me shake my head in dismay as to why I ever thought highly of this stuff as I do with 90% of the ECW footage I watch now.

Even with this drudge of garbage, there was always something noble about IWA-MS in my eyes. They had their deathmatches and they had their indy darlings, but they also ran weekly and really presented themselves at times like a territory. Hence, the title of this article and the distinction I have presented them with of being the last territory. They also weren’t afraid to be different with wrestling matches long before that became the thing to do, with having more mat oriented matches, or with throwing young guys in the ring with established veterans. The genesis of many stars seen on Monday Nights will be chronicled in this series. The other thing interesting about IWA-MS is how they reinvented themselves with top stars. CM Punk and Chris Hero come in and leave, they are replaced with Alex Shelley and Jimmy Jacobs, they are replaced with Matt Sydal and Delirious, they are replaced with Josh Abercrombie and Tyler Black. There was some diminishing returns of course in that lineage but still there was never that stagnate feeling of “what do we do now” that plagued other indies when Punk, Joe and Bryan exited for more mainstream promotions. I am ecstatic to begin this process and see where the last territory faltered and excelled.