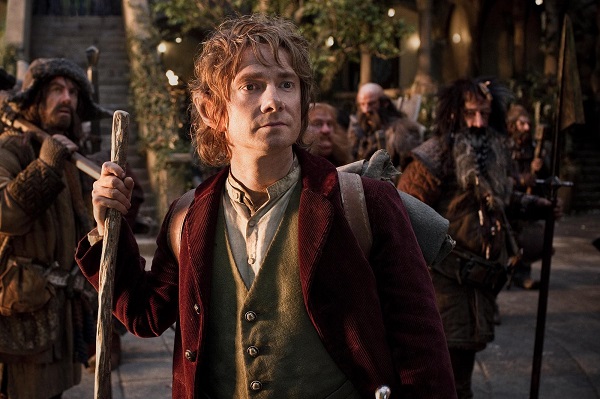 I remember my excitement for the release of the Hobbit and going to the theatre dressed like a Wizard, staff, hat, and gown. No, that was a dream, but I would have loved to go that way, instead I went packed with anticipation for what has become one of my favorite film series of all time. The movie itself was quite exciting and I was even more excited for the eventual Extended DVD release. I own the initial Lord of the Ring’s Extended Trilogy on DVD and watch them twice a year and often delve into the special features and how the movies were made. What I was more excited for were the extended scenes that tie up some of the loose ends of the film. With The Hobbit: An Unexpected Journey, the additional scenes do just that and add even more to this powerful story. Let me begin this review by giving you a list of the characters I will be referencing throughout this review and the actors that portrayed them.  I have also added a star if they were a member of the original trilogy.

Let us first begin with the story of the Hobbit. This is not a prequel to the Lord of the Rings as much as the foundation. It was written first as a stand-alone tale and then Tolkien wrote the three subsequent books of the Lord of the Rings. Film-goers are going to be able to tie some of the pieces of the Hobbit to the Lord of the Rings trilogy with the help of some returning characters and little hints throughout the film. The film starts with the familiar faces of Bilbo (Holm) and Frodo (Wood) who are returning to the series in brief cameos. They set up the tale for this exciting adventure that is referenced throughout the Lord of the Rings Trilogy. Bilbo narrates the story of the Lonely Mountain and the dragon Smaug destroying the town of Dale along with the dwarf kingdom of Erebor. The King at that time was Thror, and his grandson Thorin (Armitage) are shown in the flashback. The dragon Smaug destroyed the kingdom and took hold of the gold in the mountain along with the arkenstone. Bilbo then goes on to talk about the final stand of the dwarves outside the Lonely Mountain and when Thorin seeks the help of King Thranduil, King of the Wood-elves, he turns his back on the dwarves and leaves them for dead, thus creating the tension between dwarves and elves that is seen in the Lord of the Rings Trilogy. It is that tension and the loss of the Lonely Mountain that drives the Hobbit.

With the extended version of the DVD comes some extra little moments, one of which shows Gandalf in the shire and a very young Bilbo Baggins as a child playing with him. It is that relationship that leads to a knock on the door and the question of an adventure. Bilbo is quite hesitant and does not want to go off anywhere, but rather keep to himself. Soon after Gandalf leaves, a company of dwarves arrives and the fun begins. Here is the link the to Lord of the Rings wiki page which has a full list of the dwarves and each of their personal back-stories.

There are parts of the film that rely on humor for the younger generation and that is evident in the kitchen scene with Bilbo, Gandalf, and the Dwarves. There is signing, dancing, and some high quality dishwashing that provides a fun environment for a journey that will not be as enjoyable. It is Thorin’s arrival with the company that sets the stage for the film and steers the journey in the right direction. Bilbo is faced with the inner conflict of should I stay or should I go and much as you guessed, his inner strength comes out and he decides to join the dwarves and Gandalf on this vast journey across Middle Earth to help Thorin and company regain their homeland.

I won’t lie when I say that much of the Middle Earth movies have to do with travel. Needless to say, there is a lot of running, walking, and horse riding. The journey is the premise for the film and it does not disappoint to go through the excitement that follows. Early on in the tale, three Trolls are introduced that are referenced in the previous film and the story of their interaction with Bilbo is finally told. This also leads to the main villains in the film, the Orcs who are led by Azog the Defiler. Azog has history with Thorin and was responsible for cutting off the head of his grandfather Thror, while Thorin returned the favor cutting off his arm. The Orc pack is hunting the company and provides just enough action to keep the film at a steady pace. Outside of the main journey, there are three other pieces of the film that are worth mentioning.

Let me preface this next piece by saying that Peter Jackson has taken liberties with the books and the films, and more power to him if he keeps with what Tolkien’s vision of the stories was. One of the biggest liberties (that I truly loved) was the dwarves, Bilbo, and Gandalf arriving in elven town of Rivendell. In the extended version of the DVD, you can see some of the outlandish behavior of the dwarves compared to the uptight attitude of the elves. Elrond makes his return to the series and leads Gandalf to a special meeting lead the Lady Galadriel and Saruman the White. Neither of these characters appears in the Hobbit, although for the film, they provide a bridge between the original trilogy and the current films. Something that people who haven’t read the books numerous times (like myself) appreciate.  It is at this meeting that the Necromancer is brought up and his presence in Dol Guldur is discussed. This would be more prevalent in the second film. While the White Council is meeting, this provides the dwarves and Bilbo an opportunity to leave and lead to the next interesting piece of the film, goblins.

The goblin town is located in the Misty Mountains and another piece of humor that is brought in, especially that of the Great Goblin who is portrayed by Barry Humphries. One of the features of the extended version is a song and dance by the Great Goblin who has an enormous jugular just waiting to be punctured. Throughout this sequence the pace and frantic camera work provides some action for the dwarves and Gandalf to fight their way out of a very interesting predicament, but it is the predicament that Bilbo finds himself in during this time that is worth noting.

Gandalf alludes to the power of hobbits early on in the film and their ability to go unseen if need be. It is this ability that leads to Bilbo finding his way down into a cave. Once in the cave, Bilbo comes upon an unlikely trinket, a ring. He is not sure what this ring does or whom it belongs to, but he quickly runs into none other than Gollum. Andy Serkis has done an amazing job with this character and even has a 2nd director credit to his name in the films. Gollum and Biblo then begin a back and forth that so many people had been waiting for and is truly a positive piece of the film. Bilbo and Gollum have a game of riddles to decide whether Bilbo is eaten or whether he escapes. Bilbo is able to use his wit to outsmart Gollum but it also leads to him finding out exactly what the ring can do. After the sequence with Gollum, Bilbo finds himself back in the company of the dwarves who have mistaken his abilities throughout the movie. In the final scenes with Azog, Bilbo shows his courage and exactly what hobbits can be made of. Thorin gives Bilbo his honor and the company finally sees that there is more to this hobbit than meets the eye.

When production of this film started, many fans were dismayed that Peter Jackson would be making the Hobbit into 3 films, when in fact it was only one book. Throughout this first film there was plenty of story and action to piece it all together and without a doubt, the extended features add just enough flavor to tie it all together. The story does diverge from the books, and I don’t feel as though it is a bad thing. People who are going to these movies are looking for some type of connection between the Hobbit and the Lord of the rings and Peter Jackson is giving them just that. The additional features of the DVD are quite plentiful with all sorts of making of the film documentaries and a special piece on the people of New Zealand giving the filmmakers the right of passage. If you enjoy the look behind the camera, these features are sure to give you everything you are looking for. The Hobbit: An Unexpected Journey is a film that you will enjoy if you are a fan of the novels and of the film series as a whole.