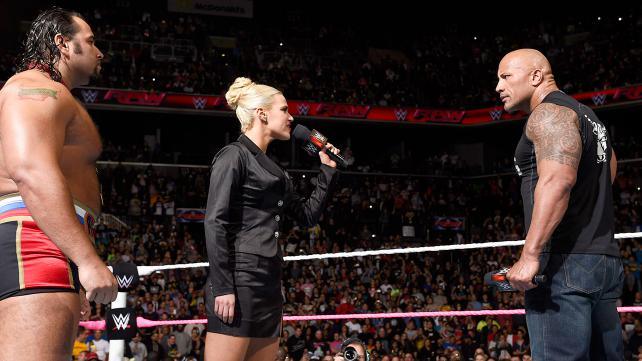 People like to be surprised. And it’s getting more difficult for wrestling fans to do so. Spoilers for events are immediately available on the Internet, even live as they happen. And, for some reason, there are often weeks between an actual taping and the broadcast date for promotions like Impact Wrestling and Ring of Honor. But the WWE has succeeded twice this year surprising, possibly even shocking, their fan base. The first, of course, took place at Wrestlemania, as even the most jaded of internet critics were stunned by Brock Lesnar defeating the Undertaker. It happened again this week, though to a lesser extent, as the iconic Rock made an unadvertised appearance on Raw to confront the Russian sympathizer Rusev and his protégé Lana.

So, besides the obvious need to pre-tape shows, why is it so hard to surprise fans? For one, news sites like to present every single possibility for a match or feud before it occurs, so they can draw numbers and claim that they were the first to know. Not convinced? In the last two weeks, I’ve read that Brock Lesnar could be facing Daniel Bryan, Roman Reigns, John Cena, The Rock, Sting or the Undertaker at Wrestlemania 31. That’s some solid prognosticating, there.

But it’s too easy to knock the Meltzers and Kellers of the world. I believe that fans need to take some ownership themselves. On the 15th anniversary episode of Smackdown (set to air the day that this article sees print), there will be a 16-man tag team match, player. On the PTBN Facebook Live Chats page, there’s already been debate to the quality of the match, which, of course, no one has seen except those in attendance in Philadelphia. If there’s a show that you want to see, like an independent show, all it takes is some simple self-discipline to stay off of Twitter for three hours during the event. By doing so, it brings the enjoyment back to wrestling we remember from the Monday Night Wars. This week, I’ve been enjoying the CMLL 81st Aniversario show without spoilers and it’s been a fun diversion from American-style wrestling. I’ve also been watching the DVD of the ROH/NJPW War of the Worlds super show, and the tag team title match between ReDRagon and the Young Bucks wasn’t as great as I hoped, as I already knew the outcome.

As fans, we can’t control whether wrestling companies telegraph the progression of their storylines. But we can alter our habits to maximize our own satisfaction with the product. And, also, when we are positively astonished by what we see play out, remember to praise those promotions as much as we criticize the status quo.