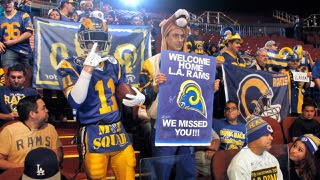 In the latest episode of The Great Debate, host Andy Atherton is joined by “The Godfather” Nate Milton, Peter Winson & Matt Souza. The gang discusses and debates a variety of sports topics, including franchise relocation in each of the major sports leagues-the NFL, NBA, NHL & MLB; what their favorite months for sports are; sports rules they don’t get and some that be gotten rid of all together; what the one thing the XFL need to do to be successful this time around and who are some of their favorite fictional on-screen sports coaches. The panel also take on pop culture topics such as which actor has been the best big-screen Superman as well as rank the ones that have played the character; Brad Pitt vs. Leonardo DiCaprio; movies that could or should be re-done or spun off as a limited series on a streaming service; some underrated songs that could become big hits if used in a movie, TV show or popular commercial; and what are some bio pics that they’d like to see. And as always, the show closes with a fun rapid-fire round that runs the gamut.