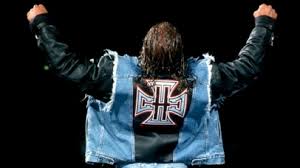 As everyone here at Place to Be Nation knows, Triple H is one of my favorite wrestlers/characters of all time. I get some thumbs ups and more then plenty of thumbs downs. It started in 1997 when he brought the Greenwich Blueblood character to another level and then when D-Generation X was created with Shawn Michaels he was even more entertaining. I was applauding the 1999 heel turn when he took the character to another level, including his first WWF Championship. He had a fantastic 2000 with big PPV wins over Mick Foley and the Rock, with multiple main events that brought great buyrates. As 2001 dawned he and Steve Austin shook off some early stinkers to put on one of the greatest WWE matches ever at No Way Out 2001. Then after losing a brawl to Undertaker at WrestleMania XVII, he teams up with Austin to create an awesome team known as the Two Man Power Trip. Their decimation of the Hardys with steel chairs on Raw in the spring was a moment of heel greatness. Then, on May 21st the unbelievable happened. During a Raw tag team title match between he and Austin vs. the Canadian Chris’, Triple H went to break up a Walls of Jericho on Austin when he seemed to have stepped wrong and crumpled to the ground. The match continued, with Triple H even being put in the Walls of Jericho on the announce table. Jericho and Chris Benoit won the tag titles but what was most startling was Triple H was outside the ring in the fetal position, clutching his leg. He was helped up the ramp by officials, but it wasn’t till the next day when the news trickled out: Triple H had torn his quad muscle right off the bone and it had rolled up his leg. He had surgery on the vaunted Dr. James Andrews’ operating table and was out for the rest of the year.

I was stunned, for he hadn’t been out of action for this extended period of time since he came to the company six years earlier. The long term plan was apparently for Trips to turn babyface and feud with Austin over the WWF Title. Well that didn’t happen, and instead we got the Invasion storyline. Hindsight is of course 20/20 and talking about the Invasion is its own long narrative that we won’t get into here, and whether Triple H would have fit somewhere is really irrelevant. I was still invested of course but not the same as if The Game was involved. In mid-November the PPV poster for Vengeance the following month came out and sure enough there was Triple H with his sledgehammer. I was pumped to see my favorite guy back in the fold, but when December 9 in San Diego came around, he wasn’t there. It turns out the WWF jumped the gun and Triple H wasn’t quite ready to return.

The following night vignettes started playing on Raw with U2’s “Beautiful Day” blasting (well U2 doesn’t really “blast”) and the announcement that Triple H was returning. No date yet, but that it was just informing hat he was returning soon. Then on the last Raw of 2001, the vignette played with a date: Triple H was returning the following week at Madison Square Garden. Raws at the World’s Most Famous Arena were rare which made them doubly special. I wasn’t sure how they’d approach it, plus Triple H left as a heel so the question out there was whether he would return as a heel.

Finally right before the last segment of the show that night, the graphic came up that he was coming up next. I was excited to finally see the moment happen. Would he run in and take out Kurt Angle, continuing a feud from over a year ago? Would he restart a feud with Austin? The show was mostly about superstars putting their names in the hat for the Royal Rumble in a few weeks in Atlanta. Out of the commercial break, Motorhead blasted and the Garden exploded. Probably the biggest MSG wrestling pop I had heard in years. He came down the ramp and was clearly emotional, as he has since said on his “Thy Kingdom Come” DVD that he wasn’t sure how he would be welcomed back by the fans. Well that crowd answered those questions. It took so long for him to get to the ring his entrance theme actually looped. He was so emotional he actually made the infamous “Let me tell you just who in the hell I am” flub in the beginning of his promo. He would announce he was in the Royal Rumble (which at that point I knew he was winning). To really hammer the point home that he’s a babyface, Kurt Angle came out to interrupt him about the Rumble and such. Triple H beat him down and dropped him with a Pedigree. That emphatic statement proved he was back as a bad ass hero, something different for him. He would eventually win the Royal Rumble, then beat Chris Jericho at WrestleMania XVIII to win the Undisputed World Title. He would re-turn heel later in the year and start Evolution and all that but again, another article for another day. He would injure his other quad in January 2007 and return at SummerSlam that year but it wasn’t the same as this first time when he was the top dog in the company and then vanished. Fourteen years ago today, I was rejuvenated as a wrestling fan after somewhat sleepwalking through 2001. On this night at Madison Square Garden, The Game restarted.