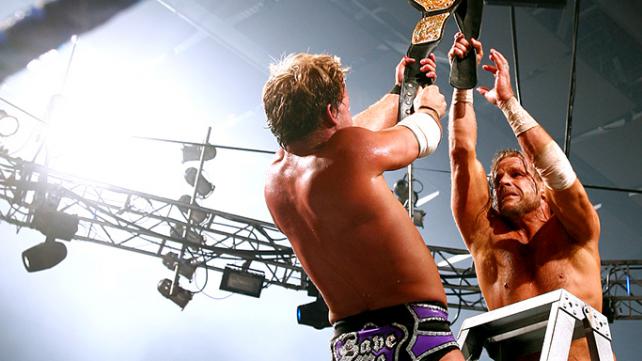 Hey there grappling aficianados! Cowboy here with this week’s installment of your favorite column here at PTBN…The Cowboy Goes to Class. After taking a trip to the wild and crazy world of ECW for our last review, the Professor has brought me closer to the present with this week’s assignment. I was tasked with taking in WWE No Mercy 2008. Given the big names on this card, I was pretty pumped up to check it out. This is definitely my first time watching this one as it fell right in the middle of my ten year hiatus from wrestling. Let’s break it down!

Match of the Night: Chris Jericho vs. Shawn Michaels in a ladder match for the World Heavyweight Title

Being honest, given the advanced age of both of these guys I wasn’t expecting much from this ladder match. Shawn always delivers the goods, but I have never been a huge fan of Jericho’s work and felt that Shawn may have been a little too old to carry him. Boy was I wrong! This match was fantastic from start to finish. In particular Shawn showed he could still carry one of these matches…in a big way. My favorite spot came when nailed Jericho with a flying elbow while the ladder was still on top of Y2J. The total disregard these guys showed for their bodies was not lost on this cowboy. Super match. With that said, as any regular readers of my columns know, I can’t stand interference at the end of big matches…much less interference from Lance Cade! Weak, Weak, Weak. Regardless, the rest of the match was good enough to still earn MOTN honors.

Performance of the Night: Jeff Hardy

Very rarely does the loser of a big match take home POTN, but in this case I’m making an exception. Hardy battled Triple H in an awesome co-main event feature for the Smackdown World Title. Performance of the Night is about expectations for me…and I did not have very high expectations for this match. Jeff appeared to be a little past his prime and Triple H was not going to lose his title to him. Again, it is nice to be pleasantly surprised. Jeff Hardy turned back the clock and gave an inspiring, high-flying performance. When he reversed the pedigree and hit Triple H with Swanton Bomb, I thought the miracle was happening. Alas, the powers that be wouldn’t give Jeff the victory this night but he did earn my respect. Great performance from a great wrestler.

To say that I am generally not a huge fan of Show’s work would be an understatement. I find him plodding, unathletic, and pretty boring overall. When I saw him billed on this card against the Undertaker I felt it was a waste of a perfectly good Undertaker. Again, I was proven wrong (which was a running theme for this show). Show was a little more nimble than what I’m used to saying and he and Taker engaged in an excellent big guy vs. big guy slobberknocker. Show even got the victory by drilling Taker with three KO punches. Really fun match and Show was actually entertaining.

As Edge’s intro song says…You think you know me? I am a well documented huge fan of the “Animal”, Batista. Because of that, this was the match I was looking most forward to on what appeared to be a pretty lackluster card on paper. While the match wasn’t awful, it certainly didn’t live up to my lofty expectations. I blame an old, broken down JBL more than the “Animal”, but Big Dave should have been able to carry this stiff to a more entertaining bout. I was happy with the patented Batistabomb finish, but the action leading up to it was a bit dull. The Cowboy expects more from you Dave.

Overall, my expectations were very low for this card and, in general, were exceeded.  ery good card and very entertaining. Until next week, Cowboy out!

For more on No Mercy 2008, be sure to check out Justin and Scott’s review!