With this weekend marking the 15 year anniversary of the passing of Rick Rude plus the recent passing of the Ultimate Warrior, it seemed like the time to honor both men with some of their matches against each other. 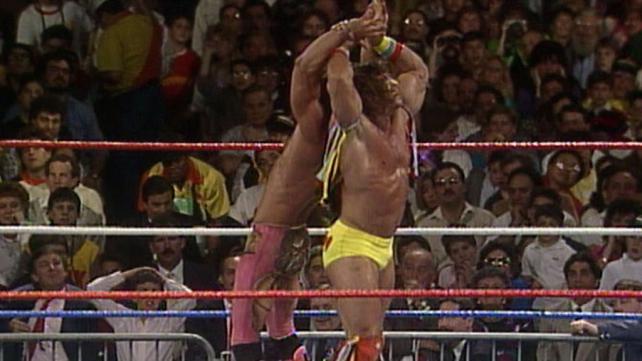 It is with a heavy heart that I start this week’s assignment. With the shocking passing of the Ultimate Warrior last Tuesday, Professor Rozzero thought we should take a look at his trilogy with “Ravishing” Rick Rude. Before we dive into the matches, I’d like to share my thoughts on Warrior. When I was a youngster, like most kids at the time, Hulk Hogan was my favorite wrestler. I thought at the time that this would never change and that the Hulkster was, for lack of a better word, invincible. Then the Ultimate Warrior came around. With his high intensity attitude, full sprint to the ring, and maniacal shaking of the ropes; the Warrior quickly became one of my favorites. As the Warrior’s career progressed, the thing I remember most is that he was the only WWF superstar to share the same aura of invincibility as the Hulkster. I remember being very confused going into their epic clash at WrestleMania VI because I literally could not picture either guy losing. When the Warrior beat Hogan clean in that bout, it didn’t seem like a reach or far-fetched. Warrior was the only wrestler on the roster during Hogan’s long reign who could pull off the clean win and not irritate the masses. Fast forward to 2014 and Warrior’s appearance on Raw. The aura of invincibility was long gone, but when he put on the war paint mask and got into character all of us kids from the 80s were immediately taken back to his heyday. He paid homage to the fans and was able to give us one last glimpse at our childhood hero. As he so poignantly stated; “The spirit of the Ultimate Warrior will run forever!” Thank you Warrior. Rest in peace.

The first bout we’ll take a look at is Warrior’s clash at WrestleMania V with “Ravishing” Rick Rude for the Intercontinental Title. My first observation is that these are two of the best walkouts of the era…for totally different reasons. Rude comes to the ring first and his “Cut the music!” routine while the camera pans to all of the big-haired, lovely ladies in the crowd is just classic. Rude’s puffed up mullet deserves a column of its own but let’s just say that the definition of “sexy” has changed a little bit over the last 25 years. Rude plays the part of the condescending male stripper to perfection as he disparages the “out of shape sweathogs” in the crowd. Rude is, of course, managed by the incomparable Bobby “the Brain” Heenan. These two are a perfect combo as Rude’s narcissism and disdain for the crowd is perfectly comparable with Heenan’s conniving personality and general sliminess. Next up is the Warrior’s entrance, which can be described as simply frenetic. The signature hard guitar riff starts and Warrior comes down the ring in a full sprint. He is all energy. One surprise to me is the crowd’s somewhat lukewarm response to the Warrior. I remember him being a completely larger than life superstar, but at this point of his career he has not quite reached that status. The crowd likes him but that discernible pop that we get for the bigger stars is not present.

The match itself is nothing special. Watching the Warrior as an adult and being more objective, he is not quite the force of nature in the ring I remember him as. He is certainly an extremely powerful man, but he doesn’t really have any wrestling moves in his arsenal. The most eye catching thing he does in this match is a big shoulder block off the ropes, which is a bit less than breathtaking. Rude, on the other hand, shows some good in ring skill, particularly for a guy with his physique. As the match progresses, the Warrior slowly begins to take control. He is getting the better of Rude and, as the big favorite, seems on his way to victory. Jesse the Body tells us repeatedly throughout the bout that the Warrior is an unintelligent brute and Bobby the Brain will outsmart him. This proves to be a case of foreshadowing as just when it seems that the Warrior will take the victory, Heenan trips him from outside the ring and holds the Warrior’s foot behind the referees back to prevent the kick out as Rude gets the three count. Rick Rude is your Intercontinental Champion! I’m not usually a big fan of outside interference, but in this case I think it was the right thing to do. The match was pretty blah and the crowd not really into it. A Warrior victory seemed predetermined and the Rude victory was a massive curveball. Also, it set up the Warrior beating up Heenan in the ring after the bout which I thought was good. Again, the crowd wasn’t totally into it though. The segment ends with Warrior chasing Rude backstage as “Ravishing” hightails it out of there. 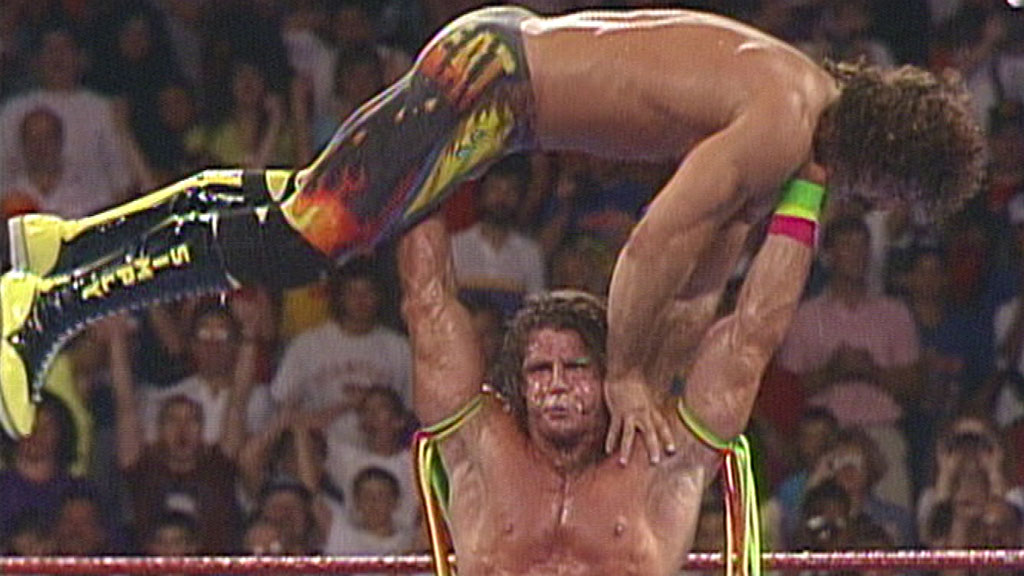 After getting screwed at WrestleMania, the Warrior is out for blood in this rematch with “Ravishing” Rick Rude for the Intercontinental Title. Before the bout, the Warrior cuts a ridiculously intense promo with Mean Gene that really gets the juices flowing. As Warrior makes his way to the ring, the pop that was missing from their first bout is there. It has only been about six months, but it is plainly obvious that the Warri0r’s popularity has skyrocketed. Rude is still fantastic as the heel and the mullet is still thankfully still present. The intensity level for this match is much, much higher than the first bout and I’m really looking forward to see how this plays out.

This match is leaps and bounds better than the first encounter. The Warrior has improved pretty dramatically and added some moves to his arsenal. He makes his way to the top rope and is just a better in ring worker overall. Rude also steps up his game in this bout and I’m surprisingly impressed with the back and forth affair. As the bout progresses, Rude looks to be well on his way to retaining his Intercontinental belt. He hits big move after big move on Warrior, each one resulting in a near fall. The Warrior is getting beat down and barely kicking out of pin attempt after pin attempt. Rude answers every Warrior rally and is in total control. This is surprising to me as given the popularity of the Warrior at this point, I thought he would get a relatively easy win in this bout.

Just when all seems lost, Rowdy Roddy Piper makes his way down to the ring. Piper has had recent issues with Rude and immediately becomes a distraction for the champion. Rude taunts Piper by doing his patented “stripper pelvic thrust” (not sure how this is supposed to be denegrating Piper but whatever) and Hot Rod responds by lifting up his kilt “Braveheart” style. Piper’s distraction gives Warrior time to recover and he levels Rude. This starts off the finishing sequence capped off with the Warrior shoulder pressing Rude over his head, dropping him, and landing a big splash. The Warrior gets the pin and has reclaimed the belt. While the result is what was expected, the way they chose to make it happen is questionable. In my opinion, Warrior should have been given the clean win here without any help from Piper. The Rude/Warrior storyline had seemingly run its course and the clean win for Warrior would have put a nice bow on it. By inserting Piper into the mix, each guy now had a cheap win against the other and a third bout was almost a necessity. The Warrior had, in my estimation, outgrown the feud with Rude at this point and a clean win would have been the perfect way to end it. Regardless, this bout was clearly the best bout of the three and gets the highest marks. 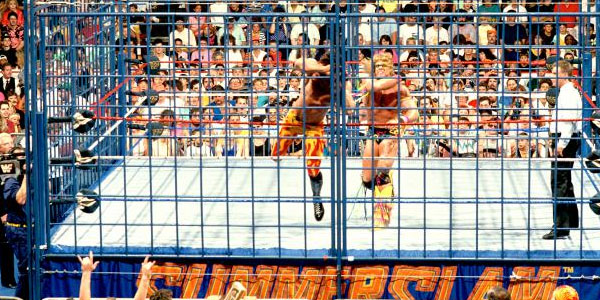 We now shift to the following summer and Warrior is right in the middle of his World Title reign. After beating the Hulkster at WrestleMania VI, he now is in the main event at SummerSlam in the final bout of his trilogy with “Ravishing” Rick. Unfortunately for Warrior, the bout is only a “co-main event” as Hogan’s bout with Earthquake shares top billing. This illustrates Hogan’s vice-like grip on the WWF and it’s fans at this time. Even after losing his title to the red hot Warrior and in a very average bout against Earthquake, he still shares main event status with the champion. As previously stated, the WWF did Warrior no favors by denying him the clean win against Rude in their previous bout. I’m a fan of Rude’s, but anyone with a brain knew he wasn’t going to win the title. Also, the mullet is gone for this bout which breaks my heart. As always the lesson is that the 90s were the “no fun decade”. Warrior gets the obligatory pop from the crowd as he makes his way to the steel cage.

This bout is pretty forgettable, particularly for a SummerSlam main event steel cage match. The fact that the outcome was never in doubt and things went completely according to form didn’t help. Rude has his moments, but this match is all about Warrior. Even dealing with interference from Heenan, Warrior controls the action. He seems to have plateaued as an in ring talent but his power moves play well in this bout. After some decent back and forth action, the Warrior finally gets his clean win versus Rude and retains the title.

I feel that this bout, and the card in general, are a microcosm of Warrior’s championship run. Unable to fully get out of Hogan’s shadow and set up with a weak match, the main event was good but not great. It just didn’t have the feel of a “Hogan as champion” main event and the difference is noticeable. The Warrior is not fully to blame for this as he brings his trademark energy and insanity to the bout. Maybe he was just better as the runaway train chasing Hogan down than as the champion. There is no shame in this as the Hulkster was just too popular and too much the face of the company for anyone to upstage him at the time.

Teacher’s Note: Great work once again, Cowboy. Glad you enjoyed the SummerSlam 1989 match, that was definitely the best of the bunch. Next week, we start week one of a two part look at one of WWF’s most epic rivalries!