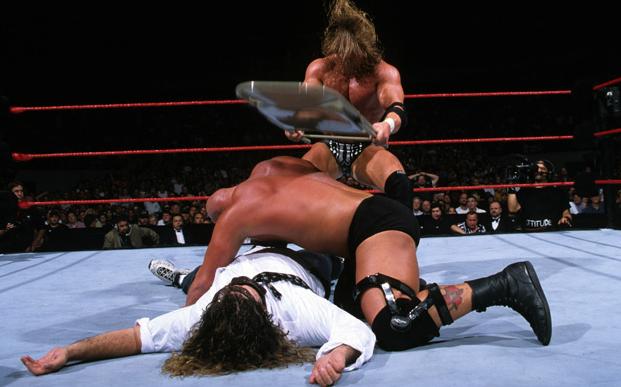 Howdy grappling groupies! Cowboy here with this week’s edition of Cowboy Goes to Class. After a short, one week hiatus we are returning with a bang. In preparation of this Sunday’s highly anticipated PPV tussle headlined by the Brock Lesnar vs. John Cena, the Professor assigned me another SummerSlam from years past. I was extremely excited to learn that this week we’d be climbing in the time machine and heading back to 1999 – right in the middle of the Attitude Era! I was a fan at this time and have some recollection of watching this event when it happened. Let’s break it down!

There is no question in my mind that this pick will be widely panned by the so called “experts”. I don’t really care…this is my column and this is the match I liked the best! I always loved the “Mr. Ass” gimmick for Billy Gunn and this was really his highest profile match. One on one with the The Great One! This match was just plain fun. The Rock cut his standard, awesome promo that had me fired up and ready to go. Then my single favorite entrance song in WWF history comes on the loudspeaker…”I’m an ASS MAN!!” Billy then kicks things up another notch by having a valet with him covered in a sheet. When the sheet comes off, a rather large woman with an ample posterior is introduced to the audience. Billy then coins one of the best lines I’ve heard in a WWF ring…”The Rock is gonna smell what her ass is cookin!” The Rock enters to a massive pop and things get underway. Mr. Ass equates himself well and controls the majority of the match. He hits the Fameasser and the Rock looks doomed. Alas, the Rock turns things around and Billy ends out with a face full of ass! Rock Bottom, People’s Elbow, goodnight…just like we drew it up. Fun match, good action, great angle, perfect ending…sounds like Match of the Night to me!

Performance of the Night: Shane McMahon

Well that came out of nowhere! Shane McMahon battled Test in match over Test’s desire to be with Stephanie. Seeing Stephanie portrayed in such an innocent light is actually refreshing given her vile persona these days. To say I wasn’t expecting much from this match would be an understatement. This was a glorified “celebrity match” in my opinion and I hoped it would just be over quick. Boy was I surprised! Shane McMahon was absolutely electrifying in this bout. The audience seemed just as surprised as me when he leapfrogged Test coming off the ropes and landed a flying reverse elbow. My jaw hit the floor when he attempted a corkscrew moonsault off the top rope. His flying elbow from the top rope onto the prone Test through the announce table is one of the better daredevil moves I’ve seen…period. While he rightfully lost the match and Test and Stephanie were free to love each other, Shane stole the show in this one. He gained my respect as he obviously put in quite a bit of work preparing for this and wasn’t afraid to put his body on the line to deliver a great match for the fans. In fact, if I wasn’t such an “Ass Man”, this would have shockingly won my Match of the Night. Great work Shane-O-Mac!

I’m generally not a huge fan of Triple Threat matches but the Main Event was an exception. Pitting three of the biggest stars in wrestling history against each other at the peak of their powers is always a good move. HHH as the nasty heel delivered as always. Stone Cold was at the apex of his popularity here as he received what can only be described as a Daniel Bryanesque pop while making his way to the squared circle. Mankind was a bit of an afterthought for me coming into the bout. This match was about the Texas Rattlesnake vs. The Game (before he was The Game). Things played out that way for the most part but somehow, in the chaos, Mankind was able to get the win. It is a testament to the fans and to how well respected Foley was that Mankind’s victory was met by mostly cheers even though the beloved Austin dropped the belt. When the match started I thought that Austin would walk away the champion and was pleasantly surprised they gave the belt to Mick on the second biggest card of the year.

Overall, this was a solid card from top to bottom and I didn’t have too many complaints. I expected a bit more from this match than what we got. Putting them in a cage fight was a very cool idea that was handled in a pretty boring way. Blackman basically kicked Shamrock’s ass the whole fight and then Ken bounced back like nothing happened at the end and turned out the lights. I felt there could have been more sustained action and the weapons actually took a little away from the overall entertainment value. I would have liked more of a back and forth slugfest/grappling match that more resembled an actual cage fight finished with a Shamrock leg lock…maybe its just the MMA fan in me! 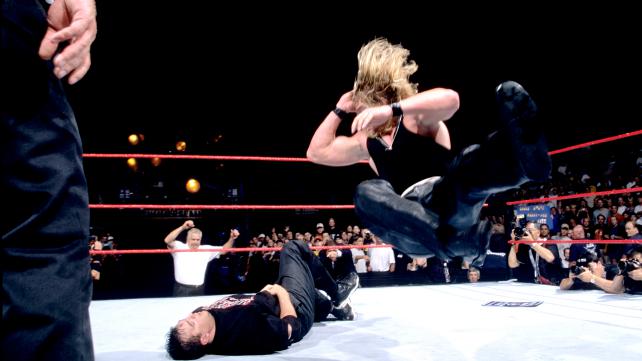