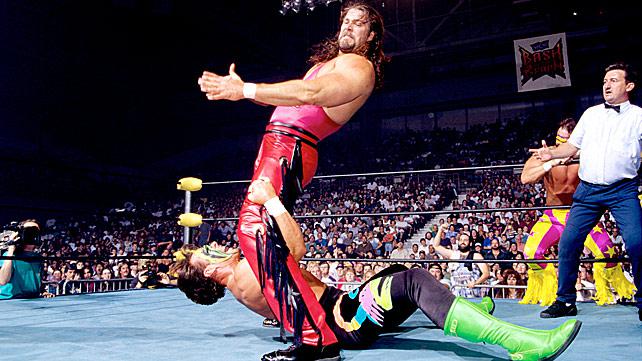 Hello again friends! This week’s column takes a look at the rise of the NWO in WCW. During my time as a wrestling fan I never really got into WCW. When superstar after superstar jumped ship from the WWF to WCW during the 90s I was upset to see them go, but not upset enough to watch too much of the rival product. In my mind, at the time, WCW overpaying for all of the WWF’s older stars only paved the way for the younger guys to step up and fill the void. Therefore, Professor Rozzero’s assignment to chronicle the initial rise of the NWO will represent the first time I have seen any of these matches. I’m also very unfamiliar with the back stories so this is truly a fresh look at a classic angle.

We kick things off with Kevin Nash, Scott Hall and their “Hostile Takeover” of WCW as The Outsiders vs. Sting, Savage (how he’s not an outsider as well is beyond me), and Luger. The most talked about issue coming into this match is that Nash and Hall have a “mystery man” as their third tag team partner. Michael Buffer kicks us off with his signature “Let’s Get Ready to Rumble!!” and introduces Nash and Hall first. As a huge boxing fan, I love the use of Buffer. His presence alone makes an event seem significantly larger and more important. As The Outsiders make their way to the ring, the mystery man has still yet to reveal himself. Mean Gene Okerlund goes into the ring and demands to know who the mystery man is. All Hall and Nash give up is that he’s in the building and ready if needed.

Next to the ring is the WCW triumvirate of Sting, Savage, and Luger. The crowd is really into it and loves these guys. Given the amount of hate Nash and Hall are receiving, my guess is that there is a contingent of “old school” WCW fans who don’t appreciate all the WWF transplants. This makes the choice of Savage as their partner a bit strange to me. I would assume that the WCW fans feel the same way about him as they do about Nash and Hall, but I may be wrong. With all the participants in the ring and ready, the match begins.

Things start off fast and furious. The bout begins as a 3 on 2 handicap match as Hall and Nash’s partner has still not been revealed. That changes rather quickly as Luger is accidentally knocked unconscious by Sting during the melee and carted off on a stretcher. The in-ring action is great as Sting, Hall, and Savage are all very solid wrestlers. Nash, while not the most technically gifted guy in the world, plays his role as the big brute to perfection. Things go back and forth nicely until Sting ends up trapped in the ring for an extended period of time. Nash brutalizes the Stinger, much to the dismay of the partisan crowd. Eventually, Sting is able to tag Savage and he goes crazy landing double axe handles off the ropes. Nash catches Savage with a low blow and all four combatants are down.

At this time, the immortal Hulk Hogan makes his way to the ring! The Hulkster is here to save his good friend Savage and Sting and prevent the Hostile Takeover. He enters the ring and the crowd goes wild. Then the unthinkable happens. Hogan hits the already downed Savage with multiple legdrops. There is a sense of disbelief as everyone realizes that Hogan is the mystery partner for Hall and Nash. This is the heel turn to end all heel turns. The Real American, the face of professional wrestling, everyone’s favorite good guy Hulk Hogan has gone to the dark side. Mean Gene interviews Hogan in the ring after the bout and Hulkamania runs wild on the fans. He insults the crowd multiple times and the NWO is now born. The crowd reaction is what makes this such an iconic moment. By the time Hogan is done talking there are no open spots on the mat as it is covered in trash. People are throwing food, drinks, and who knows what else at the newly formed NWO. It is so surreal to see such a negative reaction for the Hulkster. Nash and Hall seem to be loving every minute of it and are perfectly comfortable in the heel role. Maybe it is my WWF bias coming out, but this just doesn’t feel right. This feels more like WCW giving a big middle finger to Vince McMahon than anything else. They are basically saying that we bought the face of your company and now we are going to make everyone hate him just because we can. I wonder how Hulk feels at this point. Is he happy with the huge paycheck or does he yearn for the days he was the most beloved figure in the arena every time he performed? Given Hogan’s history of hogging the spotlight (see Mega Powers), I’m guessing the latter. Overall the match was OK but the angle is one of the most interesting in wrestling history. 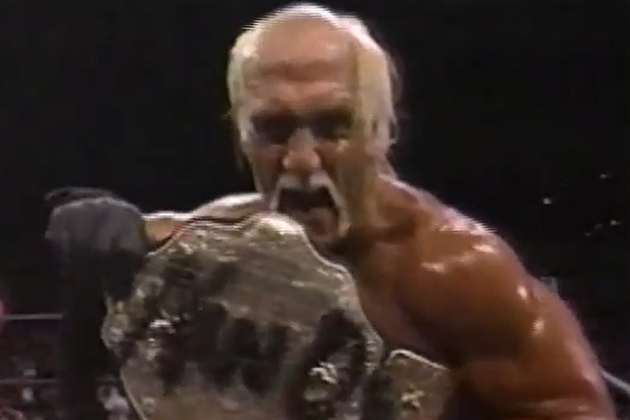 One month later in the main event of the outdoor show, Hog Wild, newly minted “Hollywood” Hulk Hogan would take on the reigning champion The Giant. Little did I know that The Giant was the same wrestler (Paul Wight) who would eventually become The Big Show in WWF. Given the events that unfolded at Bash at the Beach, it is safe to say that The Giant’s championship run is in some serious trouble here.

The match starts with Hogan consistently running scared out of the ring away from the massive Giant. With every match comes something that I’ve never seen before from the Hulkster. This is the same guy who stood up to Andre the Giant and hit him with the bodyslam heard round the world right? Now he’s running from WCW’s Andre imitation? C’mon guy. Eventually Hogan actually stands and fights in the ring and the match is so-so. Neither guy is much of a technical wrestler but they are doing a passable “big man vs. big man” match.

Hogan begins to get the upper hand and The Giant is in trouble. Then, the degradation of Hogan by the WCW hits a new low as The Giant “Hulks up”, as Hogan has done so many times in the past, and takes control of the match. He even hits the Hulkster with the signature boot off the ropes and looks like he is on his way to retaining his title. Before he’s able to finish “Hollywood” off, Nash and Hall make their way to the ring to interfere. For some reason  Hogan is not disqualified as the The Giant fights off both of his cohorts. After leveling Nash, and with the referee’s back conveniently turned, The Giant is drilled with the championship belt by Hogan, who is able to get the cover. A new champion is crowned!

The once adored Hulkster was now the most reviled champion is wrestling history. In the aftermath of the match, The Booty Man (you may know him as Brutus Beefcake) makes his way to the ring wearing an NWO t-shirt and is carrying a birthday cake and gift for Hogan. He catches a vicious beatdown by all three NWO members for his trouble. Hogan closes the show by spraypainting “NWO” on the championship belt and the new organization is now official. While I do like the angle, I’m still having trouble with Hogan as the main heel. It seems very forced to me. The other guys are great in their roles and I keep waiting for the Hulkster to tell us all it was a joke and turn on his NWO brethren. It doesn’t seem like that is in the cards at this point. This match was the natural progression for Hogan and the NWO and served the purpose of crowing him as champion. Overall it was good but not great.

Teacher’s Note: Interesting take on the heel turn of Hollywood Hogan, Cowboy. We will return to the genesis of the NWO angle in a few weeks. However, in our next installment, we go Hollywood…