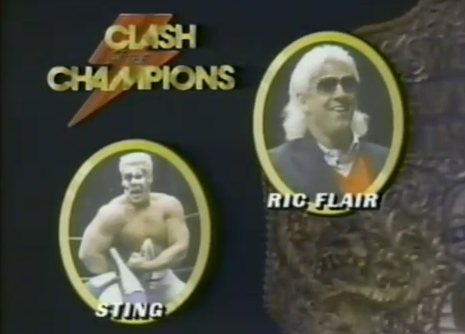 Clash of the Champions I

Due to the overwhelmingly positive feedback we received for last week’s piece on Royal Rumble 1993, for this week’s assignment Professor Rozzero has me going back to the well and reviewing another full event. I was tasked with watching NWA Clash of the Champions I from 1988. To add context, I have definitely never seen this show before. Growing up I was strictly a WWF fan. Here is the breakdown!

I’m sure that most people will go with the Sting vs. Flair marathon as the best match on this card, but I decided to go in a different direction. I thought the Tag Team Title match was just fantastic. The crowd was pumped and the match had a great ebb and flow to it. I was particularly impressed with Lex Luger and Arn Anderson. This is the second oldest match of Luger’s that I’ve watched and he is quickly becoming my favorite wrestler in NWA/WCW. He was just a great combination of size and athleticism. Anderson, for his own part, was the best pure wrestler in this match. Landing perfect power move after perfect power move, Arn was a true force of nature. The only negative for me with this match was Tully Blanchard. This is the second time I’ve seen him and, again, I came away overwhelmingly unimpressed. He’s not a big guy or an athletic guy and he really didn’t do anything of note in this match. The purists seem to love this guy but I just don’t see it. Regardless, this was an awesome match that was capped off with the titles changing hands.

Performance of the Night: Lex Luger

This was a difficult call as there were a number of deserving wrestlers on this stacked card.  I’m going to go with Luger, though. He was the dominant force on the team that pilfered the Tag Team Titles away from Blanchard and Anderson. As stated previously, Lex was a rare combination of size and athleticism. He appears to be at his physical peak during this card and landed some vicious clotheslines that I could feel sitting at home on my couch. On a card full of unstoppable forces such as Sting, Ric Flair, and the Road Warriors, Luger looked to me like the most dominant guy in the ring.

Biggest Positive Surprise: The Midnight Express vs. The Fantastics

I had never seen either of these teams before and as they made their way to the ring I wasn’t expecting much. Lots of blonde mullets and a young looking Jim Cornette had me considering the fast forward button. What originally kept me tuned in was “Beautiful” Bobby Eaton’s mullet. As most of you know, I am part of a crew that live watches the old episodes of Monday Night Raw on the Place To Be Podcast. One of our awards is for Best Mullet. Quite simply, Eaton’s mullet is the best I’ve ever seen. Nice and cropped in the front, extremely long in the back, and bleach blonde.  It really should be in the Smithsonian. Surprisingly to me this match was really, really good. With tons of action from start to finish and a number of really good moves, it got me pumped up for the rest of the card.

Without being overly familiar with anyone on the card, I did not have much as far as expectations. The opening match, however, left a pretty sour taste in my mouth. Evidently, the match was fought under college rules where the combatants only needed to achieve a one count on their opponent to win. Weak, weak, weak. If I wanted to watch Olympic style wrestling I’d go buy a DVD. Dumb concept and a terrible way to start a great show. 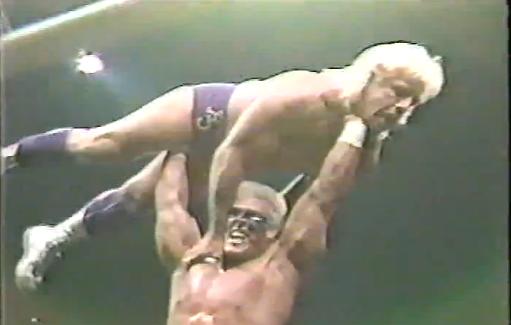 Overall, I thought the show was fantastic. There weren’t a ton of matches but more than half of them delivered in a big way. It was great to see some of my old favorites in their relatively young days. I can’t wait for next week’s assignment. Cowboy out!

Teacher’s Note: Nice trip back to the old school. Poor Tully still can’t get much love though! Next week I am pairing you up with a classmate and we fast forward into the new millennium.

For more on Clash of the Champions I, check out Scott Keith’s review of the full card!