Last week I was assigned one of the better, more interesting cards I’ve ever watched in the 1996 King of the Ring. Given that, I was excited to see what Professor Rozzero had in store for me this week. When the assignment came through I was hopeful…Bash at the Beach 1999. A quick look at the card showed a number of my old favorites: “Rowdy” Roddy Piper, Sid Vicious, Macho Man, DDP, Perry Saturn, Rey Mysterio, and quite a few others. To say that the card was a bit of a disappointment is an understatement. Regardless, I was somehow able to make it through this whole burning pile of garbage and have the breakdown for you as always!

Last week’s Match of the Night was a very tough call due to there being three or four thoroughly deserving candidates. Not so much this week. I thought this match was clearly the best match on the card. Given the dearth of in ring talent on this card, Benoit’s technical abilities really stood out even more than usual. While I am not a huge fan of the “Jersey Guys” angle at all, I thought DDP, Bigelow, and Kanyon all brought their solid “B” games (which was more than enough to take Match of the Night on this card). I particularly enjoyed the last five minutes of the bout. Kanyon throws some sort of powder at Saturn, which apparently is supposed to blind him. In the process, DDP is blinded and in his confusion hits Kanyon with the Diamond Cutter. Moments later, the still confused DDP tries to drill Benoit with a metal box and accidentally lays Kanyon out again…high comedy! The match ends as Page levels Saturn with the Diamond Cutter and the knocked out referee wakes up just in time to count to three. Overall this was a solid match. Benoit and Saturn worked well together as a team and I felt the right team won given their 3 – 2 advantage.

Performance of the Night: Finlay

I’m awarding Performance of the Night to Finlay for the sole reason that he climbed the fence and ended the disaster that was the “Junkyard Match” for the inaugural WCW Hardcore Championship. What a trainwreck this match was. A terrible combination of legitimately dangerous action with no decent camera angle. They decided to have this free for all in a junkyard, as the title informs us. I get that they are trying to be “extreme” by having these guys put themselves through windshields and what not, but couldn’t they have either filmed it during the day or just had the match inside the arena?  Instead we are “treated” to a match fought under the cover of darkness where it is pretty much impossible to tell what is going on. The “helicopter cam” is absolutely useless as I could barely make out who the combatants were, nevermind who was actually winning this thing. The closeups from inside the junkyard weren’t much better. It is a shame because these guys appeared to be doing some truly reckless stuff during the match that goes totally underappreciated. Finlay eventually makes his way to the fence and an unexplained huge car explosion provides him the cover he needs to scale the fence and claim the title. Great work Finlay! You did us all a favor.

Hopefully my sarcasm is coming through here. I always felt one of the more deplorable angles in WWF history was the Macho Man’s verbal and almost physical abuse of Miss Elizabeth. It was offensive and cast wrestling in a bad light. Most decent human beings don’t want to see that. I guess WCW didn’t get the memo. Savage now has a group of women who he apparently abuses. The black eye on who I believe is Gorgeous George was just ridiculous. I’m shocked they were able to get away with this in the late 90s. To make matters worse, the normally classy Sting beats up the already abused women during the match. Are you kidding me? Who thought this was a good idea…especially in the main event of a major PPV? Luckily for everyone, Savage gets his and the woman beater gets taken out and loses the match…oh wait…Savage won…I give up. This main event is a microcosm of what is wrong with this card. WCW is trying to “push the envelope” and instead are crossing line after line and making things uncomfortable for everyone.

On a card full of negatives, this one really stood out. We have been live-watching the early episodes of Monday Night Raw on the Place to be Podcast and I have been so impressed with the Steiner Brothers. They combine power, wrestling skill, and athleticism like very few teams do. To see how far Rick has fallen by 1999 is just sad. His angle is awful…a dog collar…really? His in-ring skills have severely eroded and I could almost not stand to watch. He wins his match against the immortal Van Hammer with two brutal blows to to Hammer’s nuts and then a terribly sloppy bulldog off the top rope. The whole thing was just depressing. 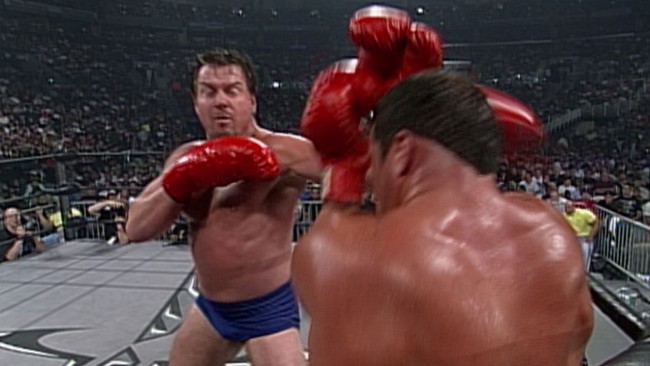 Thanks everyone for reading! I would strongly suggest never watching this card if you haven’t seen it. Hopefully the Professor has something better for me next week…I need a shower after this one!