Today on the Caliber Winfield Super Terrific Happy Hour, we continue down the fashion runway at Camp Crystal Lake, taking a look at Jason’s look from parts 6, 7, and 8. 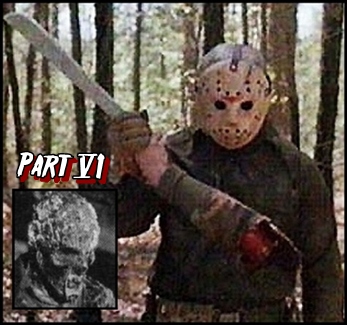 After the Halloween III-esq error that Paramount made with A New Beginning, they got things back on track with what I believe to be the best of the series; Friday The 13th part VI: Jason Lives. The look here is great, as it blends a bit of the old and the new. Jason, buried as he was from part 4, in the dark green shirt & grey pants, has now soured over time as well as being buried 6 feet underground. As the movie goes along, Jason acquires new things; gloves from Tommy Jarvis and a machete & utility belt from paintballer. There’s something about the extra amenities that make Jason look more complete, and more menacing. As if now because of the belt he’s just brimming with choices on how to kill you. I thought CJ Graham did a great job as Jason, truly making him appear as if he were a simple killing machine.
As for the reveal, it’s not much, really. Jason has been lying in a closed off coffin for 20 plus years, and his face is nothing more than dirt, cobwebs, maggots and bits of decaying flesh. When we see him without the mask it’s dark out, and we really aren’t privy to any details.

Ahh, now we’re talking. Kane Hodder’s Jason from Friday The 13th Part VII: The New Blood is the definitive Jason. This is the one that most people think of when Jason’s name is spoken. He looks absolutely incredible. Thanks to Kane Hodder, you can see that this version is the most pissed off Jason to date. He’s seething. A hulking figure that’s decaying in several places, allowing you see to the bones in his fingers, rib-cage, shoulder blades and most of his spine. Talk about fucking up your day. I mean, you come up against this guy, and what the hell are you going to do against someone who’s spine is showing, and doesn’t even have a bandage on it? On top of all of that, part of Jason’s mask is torn away due to the boat propeller from part 6, so you’re able to see a portion of his face. It’s great because everything on him is decaying, and all he cares about is dishing out axes to the face.
The reveal of Jason’s face in this one is probably the most famous. Tina uses her powers to squeeze the mask so tightly onto Jason’s head that it begins to crush it, and finally splits in two, revealing Jason’s greatest look. Parts of his skull is showing through, along with an absent nose, and gnarly teeth that were Faces of Meth before Faces of Meth. It’s a great look that gets even better, because for the first time we’re privy to Jason’s facial expressions, allowing you to see him getting more & more pissed off at Tina as he mashes his teeth while she keeps him at bay. Absolute classic. If I could, I’d name my first kid after Jason’s look in this film, and that doesn’t even make sense. 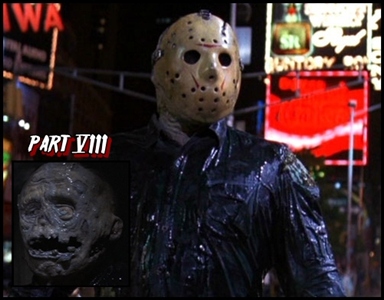 In the 8th installment of The Friday The 13th series, Jason sets out for a 3 hour cruise. This installment has taken a lot of shit over the years, but I dig it. Hell, I dig’em all. Anyway, the look is special to the film, and definitely stands out. The only thing that bothers me about the look right out, is that Jason is wearing black gloves. He had yellow ones in part 6, and while they were still yellow in part 7, they were all but rotted off. But that’s a nitpick. Two things that were significant to Jason’s look here is that he’s always wet, which I thought lent a lot to this entry sticking out on it’s own. Jason looks like a soggy bad-ass who’s pissed that his socks are constantly wet. You ever had that? It sucks. The mask stands out too because of it’s tint. It’s a darker yellow that looks great in contrast with the rest of the outfit.
As for Jason’s big reveal in this one, well, the less said about it the better. It’s easily the worst ever. Jason looks half-assed & comical, without an ounce of menace. He looks more like a muppet than anything. Very unsatisfying after the tremendous look in The New Blood.

http://www.youtube.com/watch?v=1c7xwX4XpSs
Wrong Turn 2: Dead End
One of the greatest slashers of the new millennium. Fantastic deaths, effects, villains, and Henry Rollins to boot. The video today is of the beginning of the film, and what also happens to be one of the coolest deaths in a good long while.

Questions, comments, all that hot stuff can be sent to caliberw@hotmail.com

Str8 Gangster, No Chaser is my home base, where you can find just about everything I’ve written. Including 4 years worth of articles, my ebooks, as well as my unfortunate decision to recap the entire year of 2000 in WCW. Dig it.