Be sure to check out Volume One and Volume Two of our B.C.S. Busters series!

Andrew Riche: The rare case of three undefeated teams from major conferences and one undefeated team from a smaller conference. USC won the AP national title in 2003 and kept on trucking through 2004 as Matt Leinart won the Heisman trophy and his teammate, running back Reggie Bush, was a finalist himself. The Trojans were 6th in the country in offense and 3rd in defense. They did have some close calls against Cal, Stanford, Oregon State, and UCLA, however, but they ran the gauntlet unblemished. Oklahoma bounced back from their loss in the Sugar Bowl last year to go undefeated in a Big XII that also had a 1-loss Texas team. Their close calls came late in the year against at Oklahoma State and at Texas A&M, but they pounded Colorado in the conference title game. They were also in the top 15 in both offense and defense. The third unbeaten was Auburn, who was well-balanced thanks to the dynamic running back duo of Cadillac Williams and Ronnie Brown, supported by a nasty defense (first in the country) and quarterback Jason Campbell. It sounds insane now to think that an unbeaten SEC team did not get a shot at the championship, but OU and USC had more clout at this point than the Tigers did. The controversy had to do with Texas getting to play in the Rose Bowl game over Cal, led by Aaron Rodgers, whose only lost was a nail-biter at USC. The smaller school to run the table was the Utah Utes coached by Urban Meyer out of the Mountain West. The Big Ten was shared between Michigan and Iowa while new member Virginia Tech won the ACC. Unlike Utah, who devoured Pittsburgh in the Fiesta Bowl, Boise State was also undefeated, but lost to Louisville in the Liberty Bowl. By the way, the official NCAA listing has no national champion this season due to findings years later of improper benefits to Reggie Bush at the time of the Orange Bowl.

Andrew: First off, USC deserved to be #1 and proved why in the Orange Bowl. It can be argued who should have been #2 and #3 in this year’s debate, even though they were going to play each other in this format anyway. Auburn’s schedule was slightly tougher while Oklahoma had closer games, so I would have voted for Auburn as #2 while OU goes to #3. The fourth and final spot here is seriously one of the toughest choices I have had to make in this whole series. Texas was 4th in the BCS while Cal was 4th in the A.P. leading up to the bowls. Texas, Cal, and the undefeated Utes all made great cases, although Cal lost a lot of leeway after the fact because they lost their bowl game to Texas Tech. On the other hand, Texas’ loss to Oklahoma was not as close as Cal’s loss to USC. If it was my call at the time, I probably would have gone with Cal. Utah was great all year, but they did not play a ranked opponent all year-long, so that keeps them out. (1. USC, 2. Auburn, 3. Oklahoma, 4. Cal)

Todd Gessling (PTBN College Football Expert): This is one of the first times I really ‘got’ what it was about the BCS that made peoples’ heads spin.  I spent most of my childhood as an NFL fanatic but as I got older, mostly thanks to the NCAA Football game that had Larry Fitzgerald on the cover (which actually covered this year) I really started to love the college game.  The 2004 Auburn team is one of the most criminally underrated elite teams in recent memory and the 2004 Oklahoma team, by comparison, is one that gave the foundation for “Big Game” Bob Stoops.  I think USC is the clear head and shoulders #1 and would have beaten anybody in the field.  After that, I’d like to have seen Auburn give them a shot.  My top 4 would be 1. USC, 2. Auburn, 3. Oklahoma and 4. Cal.

Greg Phillips (of the Hard Traveling Fanboys): I’d keep the top three all the same. USC was clearly, to any objective observer, the best team all year long. It was one of the most dynamic offenses in college football history, the true definition of balance. And the defense was loaded with NFL stars, on par with the great Miami teams from a few years prior. Oklahoma earned its shot at number two, and Auburn is a solid three. We’re only judging based on the regular season, remember, not the bowls. At number four, I have no problem giving Utah a shot. The Utes went unbeaten, and frankly none of the other teams warranted a crack at the top three. Utah had a terrific offense under Urban Meyer and a scrappy defense. I simply don’t think Texas and Cal warranted a shot at the national title. (1. USC, 2. OU, 3. Auburn, 4. Utah)

The Decision: USC is the unanimous #1 while Auburn gets more votes at #2 than Oklahoma, who are right behind at #3. The intrigue was always that fourth spot, and although Greg makes a good case for the little guys in Utah, Aaron Rodgers and the Cal Bears sneak in.

Andrew: USC and Cal had a fantastic game in the regular season at Southern Cal where Rodgers got near the end zone but couldn’t punch it in and USC won 23-17. The key to that game was 3 turnovers by Cal while USC only had 12 first downs. Jeff Tedford’s team had a great formula to beat USC, but in the Rose Bowl, I say the Trojans make it two and a row over their Pac 10 rivals. Meanwhile, let us finally figure out who really was the better team between Oklahoma and Auburn, when the Tigers did not get a fair shake. I saw OU against a great SEC defense the year before, and it was a sight to see. I say Auburn squeezes out the Sooners in the Sugar Bowl in a tight game.

Todd: The first game would have been Cal’s chance. It was right there for Rodger’s taking and I think if they met with national title implications on the line in a playoff scenario, the Trojans would have taken care of business again. I also think they’d win fairly comfortably, maybe by ten or so. I’ll take Auburn in a close one, mostly because I think that Auburn team is one of the best teams to miss out on a championship appearance and think it would have been an interesting matchup to see Pac-10 vs. SEC in the national championship game.

Greg: I felt the first Cal-USC game was a bit of a fluke. Not in the result, but in the final score. The Trojans simply had better players across the board, and Leinart was a better college QB than Rodgers. USC rebounds to smoke the Bears in Pasadena, let’s say 31-13. Auburn and Oklahoma would be a really intriguing matchup, and one that would have happened in a playoff scenario. I think Auburn’s running game would be too much for the Sooners to stop. I see Cadillac Williams and Ronnie Brown both having big games and the defense stifling OU’s passing attack. Auburn wins 24-17.

Andrew: Many people proclaimed at the time that Auburn did not get the matchup with USC because in the beginning of the 2003 season, Leinart’s Trojans went to Auburn and beat the Tigers by the score of 23-0. The teams in 2004 were similar, but Auburn had a lot more confidence. Todd makes a great point that we never saw USC play an SEC champion for the title. I picked LSU to take down USC the previous season, but I say USC takes this one 27-17. USC was just too dominant on both sides of the ball.

Todd: While I really liked Auburn and their running attack, I have to remember that in 2004, the SEC was not the mythical juggernaut it is now. This iteration of USC football produced some of the better teams in recent memory. I think USC just has too much in this one and Auburn falls in a close one.

Greg: I think this USC team was as good as or better than the 2001 Miami squad. Despite Auburn’s considerable grit, USC pulls away late to win 34-16. 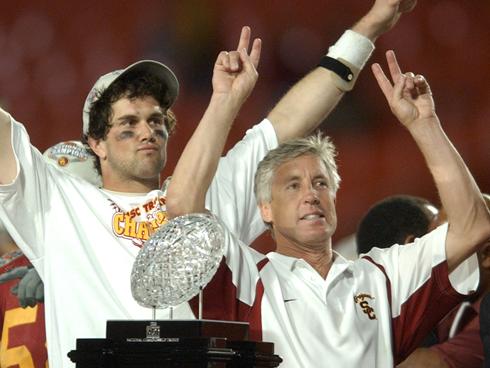