Andrew: This season, comparing the polls, was almost as consistent as it was the previous season, but there is still a contentious debate. Oklahoma had no argument at #1, going undefeated in Bob Stoops’ second season thanks to clutch play from quarterback Josh Heupel and a great defense that yielded only 15 points per game. I will never forget what they did to Texas, Kansas State, and Nebraska in three consecutive weeks. But at #2 and #3, you have familiar foes in Florida State and Miami. FSU put up insane offensive numbers behind Heisman winner Chris Weinke, but at the Orange Bowl, the ‘Noles fell to the U in a great 27-24 final which ended with (whattyaknow!) a missed FSU field goal. Miami had lost to Washington 34-29 early in the season and dominated all their Big East foes after the Florida State win, but FSU got the nod at #2 from the B.C.S. for dominating better competition in the ACC. Virginia Tech looked like a contender to go back to the title game, but a one-sided loss to Miami with an injured Vick killed their chances. The Pac 10 also had a great season overall thanks to Washington (who won the Rose Bowl), Oregon State (who won the Fiesta Bowl) and Oregon (who were Washington’s only loss and beat Texas in a phenomenal Holiday Bowl. The Big XII also had, at one point, the #1 and #2 teams in the country in Nebraska and Kansas State, but they both fell to the Sooners.

Maurice: Oklahoma finishing #1 after dominating the then-toughest NCAA conference, the Big 12, in Stoops’ inaugural year gets no arguments from me. That said, I rub a salty lemon solution into the wounds of those hating on FSU in apathy. Miami’s loss to the #15 Huskies should hurt worse, though. FSU losing to Miami when it was ranked #7 is not as bad by comparison. Though if you know your sports history, “The U” recognized that FSU got in the Championship game because it played in a stronger conference than the Big East; Miami would soon begin its push to become integrated with the ACC alongside VT.

On the back end, I’m bumping up Oregon to #7 right behind Oregon State, as they were the devourer of ranked teams and were penalized for beginning the season for being unranked. I’m also snubbing K. State because like I said in the 1999 rankings, you don’t get to be in the top 10 with three losses. This would allow Notre Dame into the top 10. I can’t stand ND, so you know I’m being generous here, but also fair.

Andrew: Let the healing begin! While Seminoles fans like Maurice were celebrating their third B.C.S. Championship Game appearance in a row (although they ultimately lost to Oklahoma), Miami fans were incensed that a team that had been ranked #2 in the A.P. poll since 11/5 was left out the fold. Personally, I thought Miami deserved that spot. Well, how’s about a rematch, bitches! Florida State and Miami can forget about the specifics of who gets #2 or #3 as they play against each other once again at the Georgia Dome in a repeat of their fantastic regular season match-up. The new committee is likely to avoid rematches if they possibly can, but this is one that college football fans would have died to see. There were some great teams from the Pac 10 and Big XII, but Washington was an easy choice for #4. They only lost to highly ranked Oregon and were somewhat punished by the voters for having a lot of close wins on their slate. Now, they get the top dog in Oklahoma in the Fiesta Bowl, where Barry Switzer and the late Don James had battled it out plenty of times in the past. (#1 Oklahoma, #2 Miami, #3 Florida State, #4 Washington)

Greg: Another easy choice for #1 is Oklahoma. I cannot fathom how Miami could have been ranked below FSU after beating them, even with a close loss of their own. I’d slate Miami at #2 and Florida State at #3, setting up an eagerly anticipated rematch as the team of the late ’90s takes on the team of the very early 2000s. Frankly, I think Washington HAS to go in at #4, just for the sake of fairness. Washington beat Miami, which beat FSU. Plus I think the matchups here are really interesting, with the dynamic Marques Tuiasosopo taking on the Sooners’ dominant defense.

THE DECISION: Maurice is hanging on to that #2 ranking for Florida State while Greg and Andrew see it the other way, even though it does not matter in this scenario. The Pac-10 Champion Huskies at #4 seemed like an easy pick, as well, although Virginia Tech could have made a decent case for a future debate.

FSU on the other hand, plays against an angry Miami Hurricanes team in a hater-aide game. If Peter Warrick’s successor, Marvin “Snoop” Minnis is suspended for this game like he was against Oklahoma in the championship game, Miami wins this game handily. Given that we already know the result of the most boring National Championship game of all time before Oklahoma and FSU, I’m going to go with Miami here, because I think they’ll actually score points on that defense.

Andrew: Battle of the not-so-fast scramblers in Josh Heupel and Marques Tuiasosopo in the Fiesta Bowl. Washington lived on the edge all season with only one loss, but Oklahoma had close shaves along with convincing blow outs against just as good competition in the Big XII. Oklahoma’s defense shuts Washington’s balanced attack down. Then, the Rematch. Miami barely beat Florida State, and both teams got on a roll right afterwards, but the defense of Miami keys in better on Weinke the second time around and beats the Noles in another close game in Atlanta.

Greg: Nobody beats Oklahoma that season, because that defense was FOR REAL. Washington would be completely out of its element against a hard-hitting, aggressive defense. I predict a 20-3 win for the Sooners that is much more dominant than the score would indicate. Meanwhile, in the much more intriguing game, Miami and Florida State have another classic. Ultra-efficient Ken Dorsey and the terrific tailback tandem of James Jackson and Clinton Portis would prove a difficult matchup for Tommy Polley and FSU’s defense to handle. Of course, the Noles would produce points of their own. I think Miami’s slightly superior talent wins out in the end, forcing a turnover from Weinke to win the game 24-21.

Maurice: I have mentioned this already, but clearly, I am still salty concerning when the NCAA declared “Snoop” Marvin Minnis ineligible for the 2000 national championship game. There’s all kinds of garbage that other institutions have done, such as Oregon, Ohio St. and Miami, and they were either forgiven or slapped on the wrist. The penalty for it was a snooze-fest National Championship game. Since then, the NCAA has a tendency to penalize teams headed for the ‘ship AFTER, not before the fact. Such was the case with Geno Smith and the aforementioned OSU.

That said, in 2000, FSU was at the top of its game, but we know how that turned out. Miami, on the other hand, had yet to be run into the ground by Larry Coker because Butch Davis was still there. Oh and DAT ROSTER! Ken Dorsey, Clinton Portis, Santana Moss, Reggie Wayne, Jeremy Shockey, Andre Johnson, Ed Reed, Phillip Buchanon, and probably a few others I am missing. We’re talking about people who went on to become Pro Bowlers with a couple Hall of Famers sprinkled in there for good measure. As invulnerable Oklahoma’s defense looked, I was unimpressed by their offense, and I think Miami finds ways to blow them out, 35-14.

Andrew: I will be THAT guy and pick Miami to win. It sounds sacrilegious to pick against the Sooners, but this team could have pulled it off. It was a younger version of the fabled 2001 team, but with guys like Reggie Wayne and Santana Moss at wideout and Dan Morgan as the leader on defense. I usually do not go with talent over togetherness, but I’ll deviate this time. Miami wins a very, very close game.

Greg: This would be an absolute slobberknocker, and I believe the ‘Canes would at least put some points on the board. However, that Sooners defense was one of the best of the BCS era, and I have to believe they’d hold on for a close, tight 13-10 win.

The 2000 B.C.S. Busters Champion is… the Miami Hurricanes! 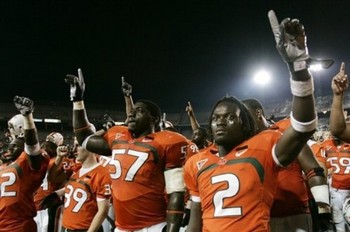 On the next installment of the B.C.S. Busters, Miami continues its reign at the top of the polls, the Big Ten’s team of the decade is in action, and will we finally see LSU vs. USC in 2003?