Andrew: A lot of stability here between the two polls. Florida State was the preseason #1 and proved the pollsters right by never losing a game. The Hokies were a surprise out of the Big East under freshman QB Michael Vick and National Coach of the Year Frank Beamer, who excelled at special teams that year. When they throttled ranked Virginia and beat Miami at home by 33 points, they cemented #2 as the only other unbeaten outside of Marshall. Nebraska only had one loss all year at Texas, and they avenged that loss in the Big XII title game with a convincing 22-6 win. Those three are the same between the two polls, but #4 is wildly different. Wisconsin was the AP #4 behind Heisman Trophy winner Ron Dayne despite two early losses, and the B.C.S. was not as kind, placing them 7th. Alabama had a beast running back of their own in Shaun Alexander, but they had two losses of their own (one against pass-happy Louisiana Tech). They did, however, smash Florida in the SEC Championship game.

Andrew: The top three are easy money here, then you get to that coveted final spot. If we went by the B.C.S. standings, Wisconsin would have played Florida State, but I am simply not sure. Yes, Alabama had that loss to Louisiana Tech, but the Badgers lost early on to Cincinnati. It would have helped to have that conference title back then between Michigan and Wisconsin, huh? Bama also beat Florida twice, once in a great game in the Swamp, and only had one conference loss against Tennessee, who finished in the top ten. Some would pine for Kansas State, but their schedule was very weak and they got smoked 41-15 by Nebraska. The SEC was slightly stronger than the Big Ten at the time, so I would have to think that the committee would have voted for Greg’s guys, Alabama. I think the B.C.S. got this one right the first time. (1. Florida State, 2. Virginia Tech, 3. Nebraska, 4. Alabama)

Greg: To me, this is probably the most cut-and-dry year in this grouping. FSU and Virginia Tech are clearly the most deserving teams, and Nebraska is a lock for #3 after a great season and several big-time victories (plus a stifling defense and potent running game). At #4, Alabama simply had the best resume of the other contenders. Two wins over the Gators when Spurrier was at his best? Yeah, that’s enough to get in, especially with a Heisman candidate running back and a defense filled with NFL prospects.

Maurice: I concur that the stars were aligned in 1999. That, or the NCAA decided that the chaos that Y2K was going to provide would be enough. On the back-end, Florida does not get to be in the top 10 after ending its season with three losses, including two consecutive losses and the already mentioned double L’s courtesy of ‘Bama. If we’re going to be anachronistic about it, this means that Penn St. technically didn’t exist, and Marshall would finish its undefeated season as #10. I am also flipping Michigan and MSU because MSU beat Michigan and Michigan lost to unranked Illinois the following week while MSU lost to Drew Brees’ #20 Purdue and then #4 Wisconsin.

THE DECISION: No drama in this room, folks. The deed has already been done. The Seminoles and Hokies are automatic choices, while Nebraska and Alabama round out the last two spots.

Andrew: Alabama played in the Orange Bowl that year also, losing an overtime thriller to Michigan, but Florida State was another animal. Their defense was full of NFL players, the offense was explosive, and Peter Warrick was a scoring machine. If David Terrell abused the Tide that badly, imagine what Warrick would have done. FSU wins handily. One of my biggest pet peeves about Nebraska in their glory days was that they were really sloppy with the ball, and Virginia Tech that year was better than anyone else at limiting possessions and pouncing on mistakes. In the battle of young, mobile QB’s, I would take the electrifying Vick over Crouch.

Greg: I concur with my colleague Mr. Riche. This Alabama team was a scrappy, gutty unit, led by the amazing Shaun Alexander on offense and Saleem Rasheed on a hard-nosed defense. However, Florida State had an unstoppable offense and the most athletic defense in the country. I don’t think it would’ve been quite the blowout Andrew predicted, but FSU wins convincingly 31-17.

Va Tech-Nebraska would come down to the little things – special teams, turnovers and penalties. Nobody was better than Frank Beamer at coaching those points. Plus he had some dude named Mike Vick that nobody had ever seen before. Va Tech pulls this one out 20-14.

Maurice: Shaun Alexander was a strong Heisman candidate that year, but in this game, I don’t see NT Corey Simon moving out of the way very often. Shutting down Alexander exposes Andrew Zow as what I believed to be an average QB playing for a five-star school loaded with talent in the other positions. FSU’s defense makes it easy for an already unstoppable offense.

Michael Vick would emerge as a defensive scheme-changing QB who would have won the Heisman as a redshirt freshman had it not been for a historic year by Ron Dayne and a then-unwritten rule that no freshman would ever win the Heisman (man, times have changed!). However, Eric Crouch had already established himself as a running QB and he schools Vick and Va Tech’s defense at just that. But I’ve been outvoted here.

Andrew: We concur with the B.C.S. for the second year in a row, and we have to go with what we saw in the Superdome that night. Michael Vick wows the audience with his dazzling improvisations, but Florida State wins comfortably.

Greg: Again, this one played out in real life, and FSU was simply a better team in every area except quarterback. This was one of the better FSU teams in the program’s history.

Dude was still mad from the loss to Tennessee last year. There was no stopping that man.

The 1999 B.C.S. Busters Champion is… The Florida State Seminoles! 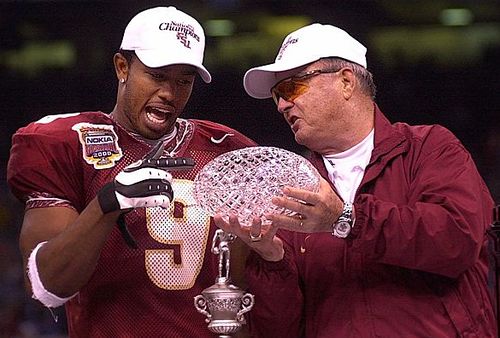