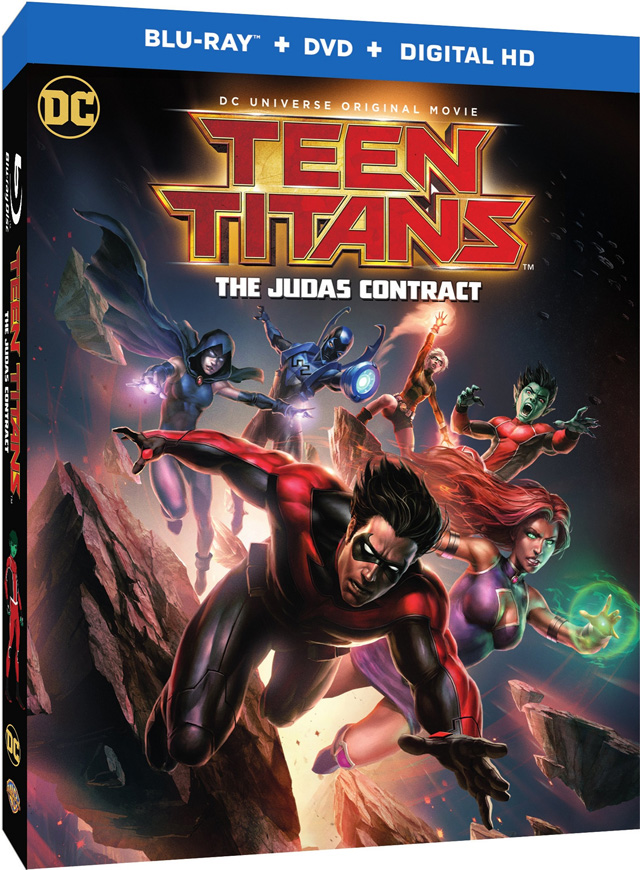 Any good comic adaptation is going to put its characters above plot, but not lose sight of what makes the story work in the first place.

In the case of Teen Titans: The Judas Contract, the character parts are right on, albeit different from the source material and even most of the story beats are clearly inspired by the classic story by Marv Wolfman and George Perez.

The story follows up on the previous film in the series, Justice League vs. Teen Titans, mainly focusing on that film’s post-credits scene that introduces Terra (Christina Ricci), a metahuman with earth manipulation abilities.

This version of Terra is suffering from PTSD and has severe trust issues along with a big secret she’s keeping from the team. But they have bigger problems to deal with as HIVE, lead in this story by Brother Blood (Gregg Henry), is kidnapping other young metahumans to steal their abilities. Next on the hitlist is, you guessed it, the Teen Titans. And for this job Brother Blood has enlisted the help of classic TT villain and Judas Contract primary antagonist, Deathstroke/Slade Wilson (Miguel Ferrer).

Director Sam Liu (Batman: Year One, Justice League vs. Teen Titans) and writer Ernie Altbacker (Justice League Dark) get a longer, 84-minute runtime for this animated feature, but they keep things moving at a brisk pace. Too brisk in some cases.

A few subplots feel underdeveloped and even unnecessary, especially where Blue Beetle (Jake T. Austin) and Raven (Taissa Farmiga) are concerned, but an effort to tie them all together at the end works better than expected. And while Damian Wayne/Robin (Stuart Allan) does serve a purpose in the story, his screen time feels a little overused at the expense of Dick Grayson/Nightwing’s (Sean Maher) and Starfire’s (Kari Wahlgren) reunion. We also never really find out why Nightwing decided to return to the Teen Titans after being gone for so long and establishing himself as his own hero in other DCAU films. It would also have been nice to find out why Dick left and what happened to a few other former Titans who appear in a quick flashback scene early in the film.

The animation this time around shows a marked improvement over some of the previous efforts in the DCAU. Most of the fight scenes are clean and crisp, especially those involving Nightwing and Deathstroke. The characterization of Deathstroke this time around is also majorly improved from his previous outing in Son of Batman. While the events of that film are referenced during conversations between Robin and Slade, the performance from Miguel Ferrer brings a certain confident sneer that was largely absent in the previous version.

HIVE and Brother Blood are sufficiently evil, but very rarely have much interesting to say. He comes off as a low-rent, less ambitious version of Ra’s al Ghul and HIVE is a poor man’s League of Assassins. Luckily Deathstroke is there to pick up most of that slack and keep things interesting.

There’s also the romantic subplot of Beast Boy (Brandon Soo Hoo) and Terra that also winds up not getting as much screen time as it needs to truly pack the emotional punch it’s trying to have at the end. While it does wind up working well overall, there are times when it feels like things are being rushed along to fit the time allotted. But, when Terra’s backstory is fully revealed, it’s hard not to feel sympathetic toward her and it’s also great to see how the team tries to rally around her, even when she’s making it impossibly difficult.

As JL vs. TT did before it, this one has a new Titan introduced in a quick scene at the end that long-time Teen Titans fans will likely cheer. And there are hints at plenty more to come for this iteration of the team. And with plenty of stories left to mine, it’d be a shame not to get at least one more chapter. And it’s the first movie in the current DCAU not to feature a single appearance by Batman.

See, you can have a decent DC film without him.