On Sunday, WWE presents the 30th annual Survivor Series. As we move towards the event, let’s take a look at how the former Thanksgiving tradition has evolved over the years.

It’s time for the Shenanigan Series, as the WWE will be changed forever with this show… at least for a few weeks.

Usually, I discuss the main focus of the show and then the best match, but for this event it was one and the same, so…

The whole build to this show is about John Cena going up against the Authority, who have been abusing their power within the WWE, and building a team to take down the power. Of course, there are a bunch of stipulations going into this match. If Team Authority wins, everyone on Cena’s team except Cena is fired. If Team Cena wins, Triple H and Stephanie are out of power. Of course, Vince McMahon opened the show by creating a loophole – If Cena’s team wins, he’s the only one who could put The Authority back in power.

Have I mentioned how much I love when shows open up with lengthy Authority promos?

Anyway, the main event was given more than enough time to build up to something fun. With introductions, shenanigans and post-match screaming from Stephanie, the match took up about a third of the show, if not more. It had everything you could want: brawling, scientific action, a Big Show heel turn and Sting making his WWE debut to take out Triple H and Seth Rollins.

Of course, for all the talk of “the WWE will be changed forever!” from the main event, The Authority was out of power for just a few weeks, when Seth Rollins forced John Cena to put them back in power when Rollins threatened Cena’s arch-nemesis, Edge. No, it makes no sense, but whatever. It’s WWE.

Still, it doesn’t take away from the quality of the match itself, which saw Dolph Ziggler taking out Kane and Luke Harper before finally pinning Seth Rollins after Sting’s interference. It should have been Ziggler’s coming out party as a main eventer. Instead, he was back to midcard jobbing way too quickly.

Worst Match: Adam Rose and The Bunny defeated Heath Slater and Titus O’Neal. What a waste of a prime Pay-Per-View spot.I would rather have seen Jack Swagger take on Cesaro, which was on the pre-show. Losing to Adam Rose is bad enough, but Heath Slater got pinned by the Bunny (who was played by Justin Gabriel, according to Wikipedia)!

What was that, Galvatron? 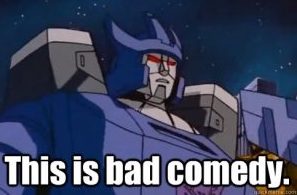 Callback: AJ Lee was defending her title against Nikki Bella, who had Brie as her grudging personal assistant. AJ Lee used to manage Daniel Bryan, who ended up married to Brie. Right off the bat, Brie kisses AJ, setting her up for a forearm shot and a rack attack and a quick win for the twin. It was a callback to Daniel Bryan’s 18-second WrestleMania loss to Sheamus, where he got Brogue Kicked after a kiss from AJ.

Of course, the worst part of this was that up until the match itself, Brie seemed to be forced to be working with her sister, but as soon as the match was over, Brie was all smiles and it seemed like she was happy Nikki won. No explanation, nothing. All of a sudden, the twins were back together.

More Women Problems: In addition to the Diva’s Title match, there was a 4-on-4 Diva’s elimination match on the card. The match was a lot better than the typical Diva’s match at Survivor Series, but it didn’t seem to excite the announce team, who spent most of the match recalling their favorite Survivor Series teams. Way to promote the match, fellas.

Tired Act: The opening Fatal Four Way match for the tag team titles was a showcase for The MIz and his “understudy” partner, Damian Mizdow, who won the titles from Goldust and Stardust and beat out the Usos and Los Matadores. While the crowd was into the Miz/Mizdow act, it got really stale quickly watching it on TV. Mizdow flopping around on the ringside apron while Miz got beat up was funny for a couple of minutes, but it got old fast.

Big Show ties for second place and Dolph Ziggler’s three eliminations in the main event claw him into the tie for the final spots in the Top 10 (or 16 now).