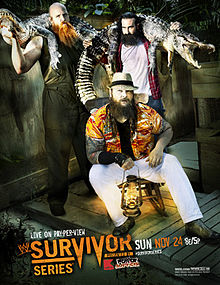 This time around, well, I won’t lie, I’m going to be doing a lot of complaining…

WWE was starting to replenish its talent pool here and it had a lot of guys on the roster with great potential – Daniel Bryan, CM Punk, The Shield, The Wyatts, Big E, Cody Rhodes and Cesaro, just to name a few guys who were on the card. Instead, we get Randy Orton and Big Show in the main event and John Cena vs. Alberto Del Rio. Fans were clamoring for Daniel Bryan’s rise to the top, but the Authority screwing him story put him on the backburner, teaming with CM Punk against the Wyatts.

This show is part of a period of time that showed the worst tendencies of WWE’s booking and a lack of direction that the fans wanted to see. The main event of the show is completely structured around a contract dispute with the Big Show and the Authority and Randy Orton’s paranoid delusions of the Authority turning on him. Why should fans care about that? The best match of the night kicked off the show and everything went downhill from there.

It should be apparent by now that I am a big fan of a well-structured traditional Survivor Series elimination match, and this was a well-done match, meant to get The Shield’s Big Dog, Roman Reigns, over as a huge threat to everyone in the company. And with four eliminations, he was pretty dominant. It helps that Reigns was in the ring with a great group of wrestlers.

Sure, the opening promos before the match were a bit silly – Zeb Colter, manager of Jack Swagger and Cesaro, twerking, leading to Cody Rhodes twerking – but once the bell rang, it was all business. The show started with a lot of potential. It’s a shame it couldn’t live up to it.

Worst Match: Mark Henry defeated Ryback. Bully Ryback challenges anyone to come out and Mark Henry accepts and… oof. Ryback could have been someone. He could’ve been a contender. What a shame.

Chekov’s… Sledgehammer?: Triple H and Stephanie McMahon start the show and tell the crowd that, in addition to the promised lack of interference in the main event, they swear there will be NO INTERFERENCE in any match on the card. So, of course, the announcement is paid off in the main event, when The Authority comes out to Triple H’s music to distract the Big Show. TECHNICALLY, it’s not interference in the match, but it helped Orton get the better of Show.

Totally Obnoxious: Promoting the E! Network “reality” show Total Divas, WWE placed the cast of the show on a team of 7 against the seven women on the roster who weren’t on the show, led by Diva’s Champion AJ Lee. I’m not sure who was supposed to be the face team or the heel team, since the TV cast was generally unlikeable and the wrestling women were led by heel AJ Lee. Also, the match allowed Nikki Bella to get three eliminations, which means she has more eliminations than superstars like: Andre the Giant, “Stone Cold” Steve Austin, John Cena, Kane, “Rowdy” Roddy Piper, Razor Ramon, Jerry “The King” Lawler and Brock Lesnar, just to name a few. Think about that.

Rey Mysterio has managed to get the best of John Bradshaw Layfield on several occasions. Now, he has tied him in eliminations!