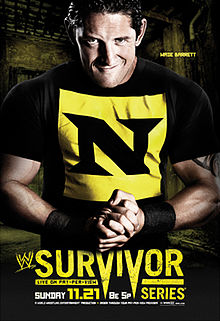 In this edition, it’s FREE OR FIRED for the Face of the WWE.

John Cena was the special guest referee for the main event tonight, that saw Randy Orton defend his WWE Title against Wade Barrett, the leader of the Nexxus. Barrett had beaten Cena down and forced Cena on board, putting an “N” armband over his shirt. Barrett promised Cena that if he helped Barrett win the WWE Title, he would be free, but if Barrett lost, Cena would be fired.

After a fairly average (maybe less-than, given the talent involved) match, after Cena counted Barrett’s shoulders down to give Orton the win, color commentator Matt Striker exclaimed “JOHN CENA IS FREE!” proving once again he wasn’t really paying attention to anything. Thankfully Michael Cole – MICHAEL COLE!! – was there to correct him. Of course, John was back soon enough and the Survivor Series tradition of main event stipulations not meaning anything in the modern era kicked off in earnest.

Best Match: Dolph Ziggler (c) defeated Kaval – Intercontinental Title Match. In terms of the action on the show, I definitely enjoyed this match more than any other on the show, as Ziggler was fresh as a singles midcard player and Internet darling and Tough Enough winner Kaval (better known as Low Ki) was able to go. And both were willing and able to keep up with each other. Too bad Kaval didn’t manage more in WWE.

Worst Match: Kane (c) vs. Edge ended in a draw – World Heavyweight Championship Match. The match was centered around the challenger’s treatment of Kane’s kayfabe father, Paul Bearer and how “The Ultimate Opportunist” was using the mind games to try and take the title away from Kane, but Edge still managed to lose in a somewhat fluky manner, with both men pinning the other with just an arm draped over their chests. Match really felt like a waste when I was hoping for something closer to the Kane-Jericho feud from a few years prior.

Another Hot One: The show started with three matches that featured some pretty impressive ringwork, – the third one is our match of the night for 2010 – and while the opener of Daniel Bryan vs. Ted DiBiase (no, the younger one) was good, the bigger surprise was how much I enjoyed John Morrison vs. Sheamus. I’m not usually a great fan of either, but it seemed like the two men managed to tam down the worst tendencies of the other to raise up the match quality.

Lots of Nothing: This was another show that I couldn’t find much to get worked up over, certainly not enough to write about. It was another average show with some good matches that could have been great, but weren’t. It’s the modern age of the WWE: nothing offensive but nothing impressive, either.

Big Show is clawing his way up through the rankings!