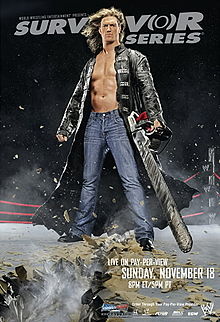 In this edition, it’s HELL IN A CELL and a not-so-surprising return.

Once again, WWE inadvertently gives away the ending of its show in the promotional material. The main event this year was a Hell in the Cell match for the World Heavyweight Championship between champion Batista and challenger The Undertaker. The announcers made a big deal that this was the fifth match between the two, each had won one with the other two being draws. So, this was to be the decisive match for the title, inside the confines of a match The Undertaker made famous.

But that frequently ends badly for The Undertaker, and this event was another example. After a grueling back and forth with the champion, the challenger was knocked out by a returning Edge, who was hidden as a cameraman. Edge was forced to relinquish the World Heavyweight Championship earlier in the year due to an injury and did not want The Undertaker to win it. So, he knocked the Deadman out and put Batista over him for the win. The ultimate opportunist, Edge would win the title back the next month at Armageddon, in a Triple Threat match with both of the guys in the main event here. Just think, the previous year at the Survivor Series, Edge was part of a team that got swept.

Best Match: Randy Orton (c) defeated Shawn Michaels – WWE Title Match. I had completely forgotten about this feud and was thinking about how a program between Randy Orton and Shawn Michaels would be pretty sweet. And then I watched this show and was reminded that it was, indeed, pretty good. HBK was banned from using Sweet Chin Music, and that played a big part in the story of the match, as the move was teased a couple times. In the end, Shawn stopped himself from using the superkick, but was met instead with an RKO to end the match. If there’s one thing you can count on, when Shawn Michaels is in a big match situation on a major card, the man delivers.

Worst Match: The Great Khali beat Hornswoggle by DQ. The continuing storyline of the bastard child of Vincent Kennedy McMahon is still going off the rails here, as the boss puts his recently-discovered child in a match with the Great Khali to help toughen him up. Of course, they felt the need to PROTECT HORNSWOGGLE, a midget, from getting beat by a giant by disqualification when Finlay interfered to protect his little buddy. Completely storyline based and a waste of one at that.

E-C-W! E-C-W!: The show opened with the first ever ECW Title being defended for the first time at the Survivor Series, with champion CM Punk defending against John Morrison and the Miz, who also held the WWE Tag Team Titles. The feud was one of the best things about the WWECW era, as it gave John Morrison a discernible personality while teaming and doing vignettes with the Miz, and it helped to further Punk along as one of the future stars of the business. You would think the tag team champs would be able to work together to eliminate an opponent, but the Miz got greedy and turned on Morrison, allowing Punk to hit him with the GTS for the win. Fun match to open the show.

What A Team: The one traditional Survivor Series elimination match was a 5-on-4 handicap match, as the team of Umaga, Big Daddy V, Finlay, MVP and Mr. Kennedy eliminated Matt Hardy before the show, leaving Triple H’s team of Jeff Hardy, Kane and Rey Mysterio a man down. While the team managed to pull off a win, with Triple H and Hardy as the survivors, trusting each other was a bit of a problem at first. Take this exchange in the backstage interview:

Kane: “I mean, this guy once accused me of being a murderer and then pretended to have sex with a mannequin and said it was my dead girlfriend.”

Triple H: “Sorry about that…”

Jeff Hardy: “That reminds me, man, you put me in the hospital before.”

Thankfully, the team captain was able to I mean, rally the troops to get them fired up for the match.

With only one elimination match this year, the only change is Jeff Hardy working his way into the 6-way tie for the final spots in the Top 10.