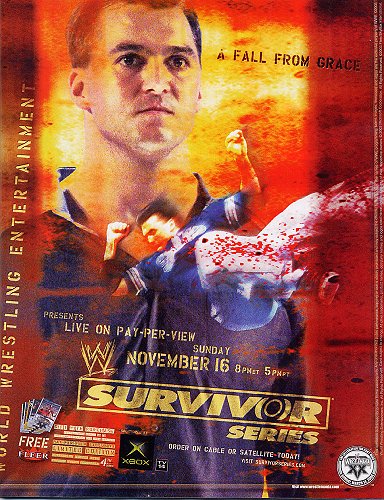 Despite Shane McMahon’s prominent placement on the promotional poster for this pay-per-view, the main event of the evening was a one-on-one match for the World Heavyweight Championship between champion Goldberg and his challenger, Triple H. After getting screwed out of the belt in the Elimination Chamber at SummerSlam, Goldberg won the belt in September and was forced to fend off the former champion and his group, Evolution, for the entirety of his title reign.

This match was no different. Goldberg not only fought off Triple H, but Ric Flair, Batista and Randy Orton on his way to picking up a win here. Four of the top guys in the sport couldn’t beat a former football player with an injured ankle. Four Horsemen-era Flair would have lost his damned mind.

The night wasn’t a complete loss for Evolution, though…

It was Team Bischoff vs. Team Austin, with “Stone Cold” Steve Austin’s career on the line, but the match became about Shawn Michaels and whether he could pull out a win going up against three men on Team Bischoff. Michaels put down Christian and Chris Jericho while bleeding like a stuck pig before being put down by Randy Orton – who had some help from his Evolution teammate Batista. The win began a streak of dominance at Survivor Series for Orton that lasted a few years.

Even though, talent-wise, I think Team Austin was significantly outnumbered, this could have been a main event-level match with how well everyone involved built toward the finishing sequence. Michaels made Orton look like a million bucks and a completely hated heel for stopping HBK’s comeback AND “ending” Austin’s WWE career.

Worst Match: Vince McMahon defeated the Undertaker – Buried Alive Match. And we went from the best match to the worst. This match was ostensibly part 2 in the McMahons vs. Brothers of Destruction, as Kane defeated Shane McMahon in an Ambulance Match earlier in the evening. Kane came back to cost the Undertaker the match and helped Vince bury his brother, putting an end to the “American Bad Ass” biker Undertaker. It’s an historic match, but that doesn’t make it good by any means.

Between this match and Michaels in the elimination match before it, the ring was covered in blood for the main event. Those may be two of the bloodiest back-to-back matches in Survivor Series history.

Wasted Potential: The opener for the 2003 Survivor Series was a traditional Survivor Series Elimination Match between teams captained by WWE Champion Brock Lesnar and Kurt Angle. The match started off with chaos, as Hardcore Holly attacked Lesnar, shoved a referee and got disqualified. We then got two more eliminations in the span of the first minute of the match, as both A-Train and Bradshaw managed to get pinned in the first minute. The match was definitely compressed and ran shorter than it could have, as the opener finished faster than the Kane-Shane Ambulance match. The match ended with John Cena nailing Big Show with his chain and hitting him with an FU to get the win for him and partner Chris Benoit, giving Cena his first big Survivor Series win.

The Set-Up: As Lesnar was being questioned backstage about being eliminated by tapping out to Benoit’s crippler crossface, he was confronted by Goldberg, putting WWE’s two world champs in the same segment. The segment would pay off over the next few months, as Lesnar cost Goldberg a Royal Rumble win in January, and Goldberg helped Eddie Guerrero beat Lesnar for the WWE Title in February. Both men would leave WWE after WrestleMania, but not before having a “so-bad-it’s-good” match at the biggest show of the year.

The battle between Eric Bischoff and Steve Austin just barely makes it into the Top 10.

This list is a Top 15 as the Heartbreak Kid climbs his way up the rankings, along with Bradshaw.