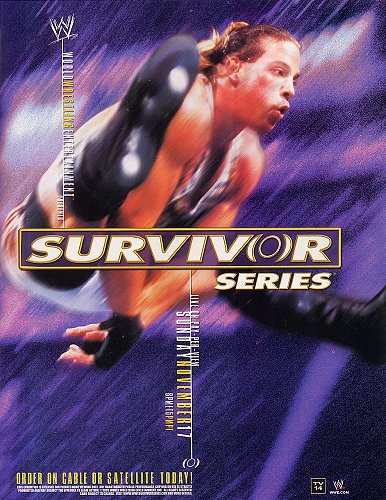 In 2002, Eric Bischoff introduced us all to the Elimination Chamber!

Just two months after Raw General Manager Eric Bischoff created the World Heavyweight Championship to counter WWE Champion Brock Lesnar signing exclusively to SmackDown, handing the belt to Triple H without a tournament of any kind, the top contenders to the new main Raw championship gathered in Bischoff’s latest creation: the Elimination Chamber. It was a scaled down version of the War Games that WCW was known for – only six men, not 8, competing individually and not on a team, in just one ring, surrounded by steel and chain link.

Triple H was defending his new championship against Kane, Rob Van Dam and Chris Jericho – the last three men to hold the Intercontinental Title before Triple H beat Kane to unify the belt with his – along with Booker T and Shawn Michaels, who was competing in just his second match since coming back from his 1998 back injury.

The match was bloody and brutal, and saw Van Dam accidentally injure Triple H with a 5-Star Frog Splash from the top of one of the chamber pods. RVD’s knee nailed Triple H in the neck, which caused the champ to lay around for the most of the match. He was back up for the end, where Michaels overcame a 2-on-1 disadvantage against Triple H and Chris Jericho to win the World Heavyweight Championship. It was the last World Title win of the Heartbreak Kid’s career, despite sticking around with amazing matches for the next 8 years.

The Elimination Chamber main event was a great way to cap off what proved to be a really fun show, with 6 good-to-great matches.

It should be no surprise that the SmackDown Six stole the show, especially as they were all the ring at the same time. Any given combination of these six men were making SmackDown the go-to show for great wrestling action, so a triple threat elimination match where these guys were paired off into teams was an easy recipe for success. It would have been great if they were given more time, but for 20 minutes, they had the fans at Madison Square Garden in the palms of their hands.

I actually enjoyed this match, I just enjoyed the other 5 matches on the card more. Everybody was game for some action and we even got a quick Dudleys reunion – despite D-Von being sent over to SmackDown – to help Bubba get the win. There were definitely more tables that got destroyed than people who were eliminated during the match, too.

Big Show and the Beast: WWE Champion Brock Lesnar had a meteoric rise to the top with Paul Heyman at his side. He beat the Rock at SummerSlam, and went to war with the Undertaker in Hell in a Cell in October. And then, still beat up and bruised from his Undertaker feud, he stepped into the ring with Big Show – against the advise of Heyman. And just when you thought Brock would cap off his amazing year by hitting Big Show with an F5 to keep his title, Heyman turned on his client and helped Show win the WWE Title. Those Survivor Series swerves keep coming, and it put Lesnar back on the chase for the belt, which led to his inclusion in the Royal Rumble.

Holla If You Hear ‘im: Matt Hardy and Chris Nowinski were in the ring running down New Yorkers, calling then “stupid” and “losers” or “lupid” as they decided to combine it, when former WCW Champ “Big Poppa Pump” Scott Steiner sauntered to the ring and cleaned house. Apparently WWE wanted Steiner as a face, hence the attack on two guys dissing New York City denizens IN Madison Square Garden, but it’s still a mystery to me why they wanted him as a face. The “Big Poppa Pump” character is just a natural heel. Steiner went on to have an incredibly dull Royal Rumble match with Triple H and then another at No Way Out and then he wasn’t even on the WrestleMania XIX card.

While there were no traditional survivor series matches in 2002, there were still three matches with Elimination Rules, and they get included here on the list. Just a little bit of upward movement as we now have a full 20 people with 4 or more eliminations.