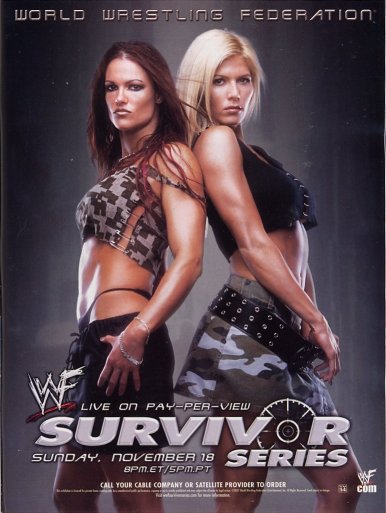 Which company will survive 2001? The World Wrestling Federation or the competing WCW-ECW Alliance? Spoiler Alert: it’s a WWF pay-per-view.

You wouldn’t know it by looking at the poster for the event, but Survivor Series 2001 was the culmination of the Invasion, which saw former WCW and ECW wrestlers joining forces with masterminds Shane and Stephanie McMahon to try and overthrow dear old dad Vince. The Alliance debuted  a couple of months after Shane stole WCW out from under Vince’s nose. While most members of the Alliance were former WCW or ECW wrestlers who were now with the WWF, there were a few WWF wrestlers who wandered over to the other side to get an advantage for themselves, including Christian and Test.

The WWF spent months defending itself from the Alliance’s onslaught, swapping titles back and forth, before the grand finale at the Survivor Series, a 5-on-5 elimination match to determine who would be the last faction standing.

The emotion and action going on in this match is absolutely off the charts, with the whole of the Invasion storyline coming to a head. The match revolved around Vince McMahon spreading rumors that Team WWF had a mole on the Alliance side, teasing that Austin was a double agent. Of course, the truth was that Your Olympic Hero, Kurt Angle, was McMahon’s man on the inside, and he helped The Rock become the sole survivor, hitting Austin with the WWF Title belt and allowing Rock to get the pin.

Survivor Series 2001’s main event went close to 45 minutes and the match never once felt boring. They gave the match all the time it needed to play out and get the fans to organically grow into a frenzy. You knew the WWF was going to win. It was a winner-takes-all match where the other side would be disbanded. And as I said above, it’s a WWF pay-per-view. In the end, they’re going to put WCW and ECW under – even if they were just the WWF’s versions.

The Invasion storyline may not have been the greatest, but it produced one of the best main events in Survivor Series history.

Nothing special, but nothing truly terrible, either. Stratus wins her first WWF Women’s Championship, though, setting the stage for the rest of her Hall of Fame-worthy career. For the record, Stratus, Lita and Jacqueline represented the WWF here, while Jazz, Molly and Ivory were on the Alliance side.

Those Title Swaps: The WWF already had a bunch of titles when the Invasion started – the WWF Title, Intercontinental Title, Hardcore Title, Lightheavyweight Title, Women’s Title and Tag Team Title – and with the influx of people, we got some more: the WCW World Heavyweight Championship, the United States Championship, the Cruiserweight Championship and the WCW Tag Team Titles. The Intercontinental and US Titles were put together when Edge (WWF) beat Test (Alliance) and the two sets of tag belts became one when the Dudleys beat the Hardys. The Dudleys – Alliance members – got to keep their jobs because they were champs, much like Steve Austin (WWF Champ), Christian (European Champ) and Rob Van Dam (Hardcore Champ). The rest of the Alliance members were at risk of losing their jobs, except…

Mr. Immunity: With a 22-man Battle Royal scheduled on the show to give one man implicit immunity from being fired – regardless of who won the main event – you’d think that a guy like Test wouldn’t need to cheat his way in. But after losing his Intercontinental Title to Edge earlier in the evening, Test found Scotty 2 Hottie in the back and beat him up to take his spot in the battle royal – and presumably his lunch money, too. Personally, I would have fired Scotty for being weak, but that’s just me.

Stupid Cage Matches: The WCW and WWF Tag Team Titles were unified inside the confines of a steel cage, with the Dudleys and the Hardys facing off once again. And while the action was great (not a surprise), I absolutely hate the escape OR pinfall rules in a tag team cage match. When one member of the team escapes, it sets up a double team that can be used to the advantage of the opposing team, to set up a pinfall. There’s a lot of suspension of disbelief in wrestling, but there is ZERO logic with those rules and it drives me crazy.

Booking Problems: From the moment Vince McMahon bought WCW right up through the end of the Invasion is probably one of the most frequently-fantasy rebooked time period in all of professional wrestling. What if Vince brought in the nWo or Goldberg or Sting or any of the other big names under contract to AOL/Time Warner and not WCW proper? What if Triple H and others weren’t injured? What if, what if, what if… Could things have been better? Yeah, maybe, but overall, I don’t think things were bad. It’s possible that with the additions of the big names who would trickle in over the next 10-12 years (Sting really caused that number to stretch out) would have thrown off the company’s chemistry even more than it already was. But it’s always fun to wonder…

Using the same logic as including the 1998 Deadly Game tournament, eliminations from the immunity battle royal are also included in the list.