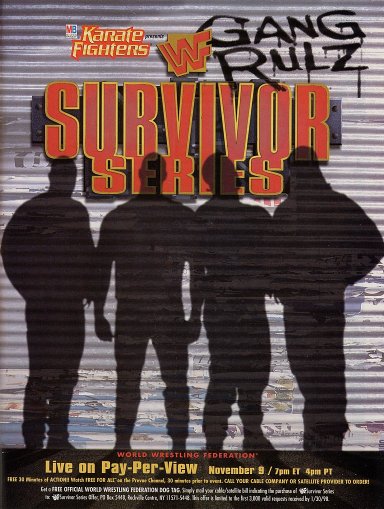 In this edition, it’s Gang Rulz and screwjobs

If not for the main event, this edition of the Survivor Series may be one of the least memorable shows of all time. The WWF stuffed four 8-man elimination matches onto the card, plus three one-on-one encounters and, up until the final 5 or 10 minutes of the show, nothing at all really stands out.

The show was subtitled “GANG RULZ” because apparently the WWF decided to get the E out. It’s almost shocking they didn’t call the event this year SURVIVOR SRS. There were, in fact, a number of different factions in the company at the time – The Truth Commission, The Nation of Domination, the DOA, the Hart Foundation and DeGeneration X all took up a large swath of roster space. So it made sense to have all these elimination matches, but from what I remember of the end of 1997, all eyes were on the main event and almost everything else was just there.

Best Match: Shawn Michaels defeated Bret “Hitman” Hart (c) – WWF Title Match. Even with all the shenanigans that surrounded the end of this match, Hart and Michaels still put on the match of the night and it isn’t even close. The disdain between both of these men crossed between a work and shoot probably more times than either man can remember, and the direction of the WWE for the next five years all come from this match. There’s an amazing amount of emotion in this match, which included a lengthy pre-match brawl, and the wildly hot crowd really helped to build to the ending.

Obviously, none of us really know where things stood as the show went on the air, or who knew what and when, but the WWF was selling this match all night long as a special match. Vince McMahon and Commissioner Sgt. Slaughter appeared in a backstage interview half-way through the show saying that everyone was being kept apart and the match would happen without a hitch. And it all fit with the storyline they had built with Hart and Michaels, but in hindsight, it all seems to play into the end of the match. There are people who think the Montreal Screwjob was a work, of course, and a lot of the reasons why is how well the entire Michaels-Hart story flows from beginning to end.

Either way, the whole night built to this one moment, and even with the wacky, come-from-nowhere ending, the match delivered.

Worst Match: The Interrogator, The Jackyl, Sniper and Recon defeated Crush, 8-Ball, Skull and Chainz. For those keeping track of the Gangs of 1997 WWF, this is the Truth Commission defeating the Disciples of Apocalypse. If it sounds awful written out, it was just as bad when I watched it.

Rattlesnake Rules: Just 98 days before Survivor Series ’97 – on August 3 at SummerSlam in the Meadowlands – Owen Hart broke “Stone Cold” Steve Austin’s neck with a botched sit-out inverted piledriver. Less than 100 days later, Austin was back in the ring and took back the Intercontinental Title he won at SummerSlam but was forced to give up due to the injury. Imagine coming back from a broken neck in less than 100 days! Because of that injury, Austin had to change the way he wrestled from the mechanic he’d been his entire career to setting the stage for WWF/E Main Event Style. Austin’s Survivor Series win was nothing special, really, an average match on a below-average card, but “Stone Cold’s” rise up the card was one of the highlights of the early stages of the Attitude Era, and this was an important step. From here, Austin moved away from Owen Hart and the Hart Foundation and over to The Rock and the Nation of Domination before targeting Shawn Michaels and Degeneration X.

Hellfire and Brimstone: This was not Glenn Jacobs’ first Survivor Series. He had appeared as Isaac Yankem, DDS in 1995 and as Jim Ross’ new Diesel in 1996. But in 1997, he had his first pay-per-view match as the younger brother of the Undertaker, Kane, after showing up to interfere in the Hell in a Cell match between Undertaker and Shawn Michaels at Badd Blood in October. Kane was a psychological tool used by Paul Bearer to get back at the Undertaker, but he became a character that has evolved tremendously over the last 19 years. From a muted monster to corporate stooge, Kane definitely outlived any expectations people had for him when the red arena lights first appeared.

No new additions this time around, as the best match of this show just barely misses the cut.

The Most Electrifying Man in Sports Entertainment makes his way into the list.