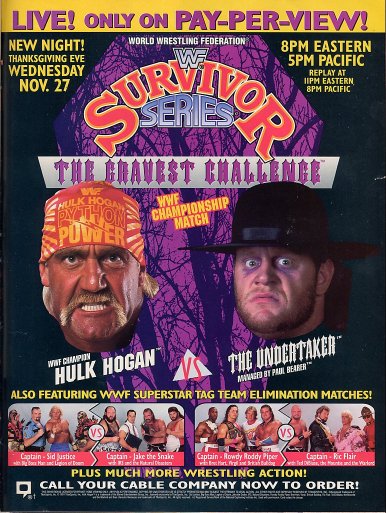 It’s 1991 and the Survivor Series presented the Gravest Challenge!

Lots of changes to the Survivor Series in 1991, as the event moves from Thanksgiving Day to Thanksgiving Eve, effectively ceding the holiday to football and turkey-induced comas. And we also get our first one-on-one match at the Survivor Series, a WWF Title match between champion Hulk Hogan and The Undertaker, who had yet to lose at a televised event one year into his tenure in the WWF.

The match kicked off a tumultuous year for the the World Wrestling Federation, which began to shift the focus away from the superhero Hogan and towards smaller athletes at the top of the card. The Undertaker wins his first WWF Title here with help from Ric Flair, loses it the next Tuesday In Texas, at a special pay-per-view, and the title eventually ends up on Flair at the Royal Rumble, after WWF President Jack Tunney holds the belt up because of all the shenanigans.

The title change is also only the second WWF Title change in a pay-per-view that isn’t a WrestleMania, with the first coming at the Royal Rumble earlier that year.

Survivor Series 1991 was a more eventful show as there was a lot of change just starting to hit the WWF. It’s still a fun show, even if some of the matches weren’t really great. The energy in the crowd died after the WWF Title match went on third, with two matches to go, and the card really bogs down at the end.

I think with another group of wrestlers, the ending of this match, with 5 of the 6 remaining guys in the match disqualified for wrestling outside the ring, it would have been universally panned. But with Flair, Piper, Hart and DiBiase in the match, it just worked and it was a lot of fun. The match managed to push the idea that Flair was the smartest guy in the match, finding a way to win no matter what, which certainly came into play at the Royal Rumble for the WWF Title in January. It was his first WWF pay-per-view and they managed to make him look like a star, which is not always the case.

We get our second clean sweep in Survivor Series history, as a team comprised completely of jobbers to the stars gets completely destroyed. It’s actually shocking that there are two former WWF Champions and two former Intercontinental Champions in the match, because at the end of 1991, no one was taking anyone in this match seriously. It was the shortest elimination match on the show at around 15 minutes and I wouldn’t have minded if it lost another couple of minutes.

A Vicious, Savage Cycle: The final match of the evening – definitely not the main event, which went on third – was supposed to feature a team captained by Sid Justice (better known as Sid Vicious) against Jake “The Snake” Roberts’ team. But Sid got injured and instead of finding a replacement for Sid, the WWF instead filmed an angle with Roberts feeding Randy Savage’s arm to a King Cobra, truly kicking off a feud that started after the end of SummerSlam 1991. Roberts wasn’t allowed to compete at Survivor Series, but they did announce the match would take place This Tuesday in Texas! Without the two original captains, the match was really a mess, with no one really caring about it.

The Beginning of the End: While the Survivor Series was the “end of the beginning” for Savage and Roberts, the partnership between Shawn Michaels and Marty Jannetty was on its last legs here. Jannetty caused Michaels to be eliminated in the Rockers/Bushwhackers vs. Beverlys/Nastys match, after accidentally hitting the future Heartbreak Kid in the face with an opponents boots while bodyslamming. Michaels, annoyed, bitched out Jannetty before bucking him up and heading to the back and leaving his partner at a 3-on-1 disadvantage.

What made the whole thing worse was the commentary of Gorilla Monsoon and Bobby Heenan, who saw Shawn get pinned and then questioned why Michaels was leaving because, as Gorilla put it, he was never eliminated. Jesse Ventura would have called Monsoon on it, but Heenan just acted aloof. They even clipped the three count from the review of the incident, making it even more confusing for anyone not really paying attention.

Two new additions to the Top Ten this time around, including our first one-on-one and title match.

Two men hop up the rankings a bit, but the make-up of the list is the same as last time.