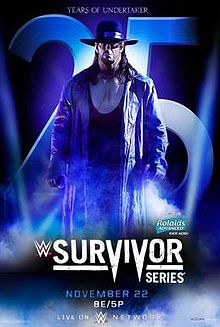 On Sunday, WWE presents the 30th annual Survivor Series. As we move towards the event, let’s take a look at how the former Thanksgiving tradition has evolved over the years.

The Undertaker celebrates 25 years since he debuted and the WWE World Heavyweight Championship is up for grabs in a tournament.

While most of the hype for Survivor Series was focused around The Undertaker’s 25th year in the company, the card was structured around the semifinals and finals of the tournament for the WWE World Heavyweight Championship, which was vacated when Seth Rollins injured himself in a match with Kane. After defeating Alberto Del Rio and Kevin Owens, former Shield teammates Roman Reigns and Dean Ambrose were set to take each other on in the finals.

This was the perfect time for WWE to try and shake things up. Seth Rollins wasn’t really working as champion. Roman Reigns wasn’t getting the reaction WWE wanted. Strapping a rocket to Dean Ambrose or Kevin Owens and trying a new direction would have been advisable, I think, but the McMahons were set on keeping Reigns at the top of the card going into WrestleMania season. So, Reigns ends up hitting Ambrose with a spear for his first World Title. Unfortunately for him and everyone involved, it didn’t last long…

The women steal the show this time around, as the “Diva’s Revolution” takes over. Charlotte and Paige were motivated to prove themselves and put on a fun match. While we may make fun of the way Stephanie McMahon brought all the women up, the Paige heel turn was a great way to re-energize the division to get some good matches going instead of the Divas who weren’t really bringing any kinds of snowflakes on big cards.

While letting Roman Reigns win the title at the end of the Survivor Series tournament felt like a mistake from a fan standpoint, how they ended the show made it a lot worse. Instead of at least letting Reigns run with it when they gave him the title, they decided to screw him over as Sheamus cashed in his Money in the Bank briefcase to beat Reigns, who refused to shake Triple H’s hand in congratulations when he won. Sheamus was the same-old, same-old that WWE needed to get away from.

Deadman Anniversary: After 25 years of being a consummate company man for WWE, The Undertaker celebrated his career by teaming with his kayfabe brother Kane to take on the Wyatt Family in one of the least-anticipated matches of Undertaker’s career. No one expected the Wyatts to win and, I would think, no one expected a good match, either. And they didn’t get a good match, either. The Brothers of Destruction destroyed the Wyatts and no one cared by Monday on Raw.

Fun With Words: The WWE Network description for this show caught my eye: “When the fall season reaches its twilight and the winds of winter blow on the horizon, the bells toll in celebration got 25 years of The Undertaker at this year’s Survivor Series. At this annual event, whether by passion or by conquest, the Superstars of WWE will seek to achieve greatness as the tournament to crown a new WWE World Heavyweight Champion concludes.” Someone was taking an Intro to Lit class…

We’ll see what WWE has in store for us Sunday, but this may be the final lineup.

With the established elimination rules, Roman Reigns’ two tournament wins here brings him up to 6 eliminations, and the (growing) tie for the final two spots in the top ten.