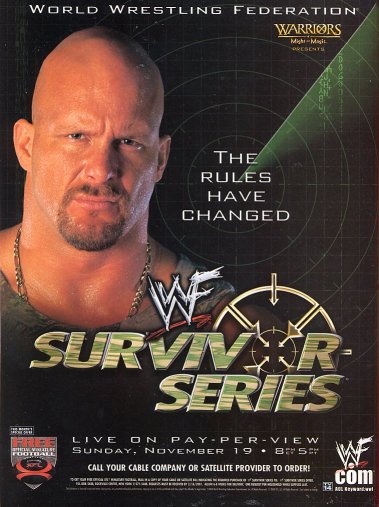 As I watched this show for this column, I got an instant flashback to watching it live, one of the few pay-per-views from summer 1997-2003 that I watched live as it happened on pay-per-view. I enjoyed the show back then, and I think overall it’s aged well, with some fun matches. Although, the ending of the show still leaves me scratching my head.

The main event wasn’t for the WWF Title; it wasn’t a high-stakes elimination match. No, it was just a one-on-one no disqualification grudge match between “Stone Cold” Steve Austin and Triple H, the guy who had Austin run over at the same event one year prior. Yeah, the WWF managed to bide its time for a full year to kick the Austin-Triple H feud into high gear (The other guy involved in hit-and-run, Rikishi, fought The Rock, the man he claimed to run Austin over for, at Survivor Series 2000).

It’s entirely possible, though, that they took the angle a bit too far. The match didn’t end in the ring or backstage. No, it sprawled out to the parking lot, where Triple H was trying to lure Austin to have him run over AGAIN. Instead, Austin managed to find a fork lift, carrying Triple H’s car high up in the air before dropping the car top first into the parking lot cement to close out the show. Triple H, being so much stronger than everyone else in the world, didn’t die in that fall that would have killed ANYONE else. No, he was back not long after, and event competed for the WWF Title at the December pay-per-view. Suspension of disbelief needed to be high for that one.

The match could have been match of the night, maybe could have cracked the Top 10 here, but the ending was really just too ridiculous for me to take seriously.

Best Match: Kane defeated Chris Jericho. I know, right? I was a little surprised, too. But the top matches at Survivor Series 2000 were all heavy on the funny business, and it really marred by enjoyment of them. But Kane and Jericho was a fun match that I wasn’t expecting from Kane at this point. It was a great fight with Jericho’s speed pitted against Kane’s strength, and the two of them sucked me in pretty quick. It really goes to show what Kane was capable of with a guy like Jericho.

Worst Match: Crash Holly, Molly Holly and Steve Blackman defeated Test, Albert and Trish Stratus. Nothing really terrible or offensive about this match, it just didn’t mesh as well as the other matches on the card. Trish was still learning her way around the ring and no one else was really all that motivated.

Rocked: As mentioned up above, the Rock-Rikishi match was the second match to come out of the Austin hit-and-run incident from the previous year, as Rikishi cost The Rock his WWF Title to Kurt Angle in October and when Rocky refused to forgive the former dancing Samoan, Rikishi turned on him and told the world that Rock knew about the attack on Austin. Another fun match during the Survivor Series, which Rock won with a People’s Elbow, but Rikishi attacked the People’s Champ after the match and nailed him with four Bonzai drops.

“Twin” Magic: A running gag during the Survivor Series was Kurt Angle’s seeming over-confidence as he prepared for his WWF Title defense against The Undertaker. He told his pals Edge and Christian he had it covered when they cut Angle off to say they couldn’t help. And then he aloofly told Trish Stratus, who was coming on to him, that he didn’t need Test and Albert’s help. Turns out, Angle was telling the truth, he DID have it covered, in the form of his brother, Eric. Kurt crawled under the ring only for Eric to emerge and get hit with a Last Ride. When Earl Hebner saw it wasn’t Kurt, he stopped counting the pin, allowing Kurt to roll Taker up from behind and get the win. Intelligence WAS one of the three I’s, after all. To his credit, Undertaker did not ask who paid for the plastic surgery…

Her Face Was A Crimson Mask: You don’t get a lot of color in women’s matches, but the WWF Women’s Title match at Survivor Series 2000 was covered in blood. Champion Ivory, in her Right To Censor outfit, caught Lita in the face with her boot and caused a gusher to open up around Lita’s cheek. Even with the blood literally leaving Lita’s body, Ivory still needed help from RTC leader Steven Richards to win the match and keep her title.

Man, this is kind of redundant…

No changes at all!